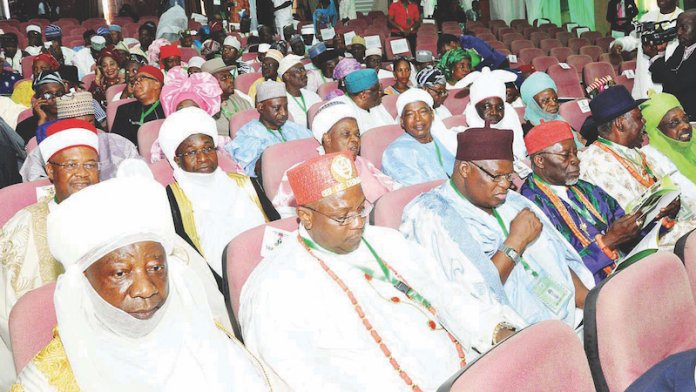 It was once seen as a political bargaining tool of the Southwest political leaders, but from indications, the issue of restructuring might have assumed a life of its own despite the fact that it irritates Also Rock. Shola Oyeyipo writes

Apowerful message was sent recently, when the Arewa Consultative Forum (ACF), lent its voice to the growing call for restructuring of the polity. What had started as the political swansong of the southern part of the country and which was seen as a cry by those, who had lost out in the power game has assumed a life of its own.

Also recently, respected cleric and General Overseer of the Redeemed Christian Church of God (RCCG), Pastor Enoch Adeboye, sounded a warning that Nigeria might break up if she didn’t revisit the structure of the federation.

The former university lecturer said the nation has to look at how things are presently or “why can’t we have a system of government that will create what I will call the United States of Nigeria? Let me explain. We all know that we must restructure. It’s either we restructure or we break, you don’t have to be a prophet to know that one. That is certain – restructure or we break up.
“Now, we don’t want to break up, God forbid. In the restructuring, why don’t we have a Nigerian kind of democracy? At the federal level, why don’t we have a President and a Prime Minister?”

While it did not directly say it fully supported the call for restructuring, the ACF stated that it was not afraid of the call for the nation to revisit the terms of its union. The northern body had this to say:
“The North is not afraid of restructuring. What we want is to define what is it that we want. If we want to be in Nigeria and if we don’t want to be in Nigeria, let’s sit down and agree. We can restructure. We can become a confederation.

“We can devolve powers. We can have state police and all that we want. But I can tell you that the thinking of the North now is that we should have a referendum if we want Nigeria or not. If we want Nigeria, then, we must sit down and see how Nigeria will work.

“If we need the country, let’s sit down and decide that we need the country first. Then, we can now sit down and decide on how our country can work for all of us. If we decide that we don’t want the country as it is, then, I mean, countries have gone apart. Czechoslovakia and quite several other countries, including Sudan, had gone apart. We don’t want to go to war.”
As for the Igbos, young people, especially those born after the civil war of between 1967 and 1970 have been calling for the return to Biafra, the stillborn nation that led to the civil war in the first place.

To many Nigerians, the call for restructuring has assumed a life of its own but for Aso Rock, it has become like a recurring elephant in the room that must be handled carefully.
Despite the arrogant grandstanding on the part of President Muhammadu Buhari’s handlers, who always see anyone that expresses contrary opinion as enemy of the government, it is obvious that these are worrying times for the Presidency.

If the call for restructuring has assumed a life of its own, perhaps, the Presidency invited it over itself. Since Buhari assumed office in 2015, he and his henchmen have been disappointingly insensitive to the nation’s diversity.
It has mismanaged the nation’s fault lines to the extent that some ethnic jingoists and tribal hegemonists have found veritable latitudes to call for restructuring and even constitutional review. And some have openly called for a dismemberment of the country.

In terms of appointments, especially key ones that require careful consideration of the nation’s diversity, Buhari has displayed the kind of insensitivity that makes many wonder if he still remembers that the country does not end in Kaduna or Kogi State.
Just last week, the Department of State Security (DSS) was accused of carrying out clandestine recruitment that was filled up mainly by northerners. This and other issues like this have led to many asking if truly the nation was one.

Last month, the fear of Oduduwa Republic, despite initial grandstanding on the part of the authorities, reached a point whereby security operatives were deployed in virtually all the state capitals in the Southwest. This was a sign that the government was really worried.

Rhetoric from some northern elements too does not help matters. For instance, Dr. Juniad Mohammed claimed recently that the north would revolt against any government that implements the report of the 2014 confab. This was despite that fact that he participated in the conference.

But Yinka Odumakin, a prominent Afenifere described his statement as unfortunate. Odumakin condemned the statement credited to Mohammed on the North revolting against any government that implements the recommendations of the 2014 National Conference, describing it as irresponsible.
“He was part of the conference and the decisions reached. I challenge him to swear that he did not participate in the conference,” Odumakin said.

From all indications, the component parts of the nation are still not on same page as far as the issue of restructuring is concerned. But the gladdening part of it is that it has become an issue everyone has come to accept as one that cannot be wished away.

The now defunct Action Congress of Nigeria (ACN), one of the legacy parties that formed the ruling APC once had restructuring as its campaign mantra and negotiating tool. Unfortunately, since most of its then leaders are now in government, mum has been the word.

Yet, no matter the position of the ACF, restructuring has become a bull in China shop. You thread with caution handling it.