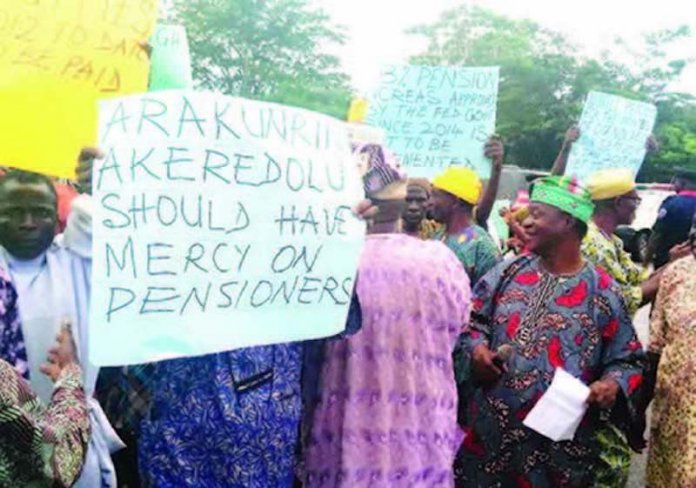 The Ekiti State Government and its pensioners under the aegis of the Nigeria Union of Pensioners are currently at loggerheads over an arrangement to deduct 25% from the pensioners’ gratuities to defray N16 billion arrears.

The pensioners rejected the proposal of Governor Kayode Fayemi to bring in a financial institution to pay gratuity arrears with a condition that 25 percent will be deducted from the entitlement of every pensioner.

In a statement circulated during a protest Friday, the pensioners contended that the attempt to deduct 25% from their gratuities was a violation of their fundamental rights, which they said, would be rejected.
The statement by the prisoners said: “This is a gross violation and the government must reverse the arrangement. It is our right to take full gratuities after working for 35 years. We consider this a scam and we reject it.”

However, the state government debunked the claims of the pensioners that it planned to impose such an arrangement on them, noting that the arrangement was optional and never compulsory for the pensioners.
At a news conference he addressed alongside Secretary to the State Government, Mr. Biodun Oyebanji yesterday, the Commissioner for Information, Mr. Akin Omole said the state government established the Ekiti Discount Gratuity Settlement Scheme after consulting with NUP’s leadership.

Omole explained the essence of the scheme, which according to him, was designed to fast track payment of gratuity areas via a negotiated discount process.
He said the state government “negotiated and obtained approval of NUP’s leadership to commence the scheme whereby a financial institution (United Capital) would pay the retirees under agreed terms and collect the funds from the government between now and 2022 when the programme would end.

“Interested pensioners are to choose which period they prefer from March 2021; June 2021; October 2021 and February 2022 with discounts of 15%, 10%, 5% and 0% respectively.
“Concerned pensioners would be guaranteed payment of their individual gratuities with promissory note that would be issued to them.

“Other pensioners, who are not interested in participating in the scheme, may wait patiently for the date on their promissory notes which would be issued for February 2022. They would get their money in full without discount or deductions.
“The scheme is completely optional. No retiree is forced or mandated to accept any discount if they choose to wait until February 2022,” Omole said.

Also at the conference, Oyebanji pointed out that the four model schools established by the Fayemi administration in Ado Ekiti to decongest the existing ones would be commissioned and students would resume next month.

He said Ikun Dairy Farm and several road projects would be inaugurated to mark the anniversary. He noted that the outbreak of COVID-19 slowed down the completion of the airport project, Oja Oba, Civic Centre, Traditional Council Chambers, Judiciary Complex and road projects.
Among others, Oyebanji said these projects would be completed before the end of 2021. He disclosed that the World Bank had approved $20 million for critical sectors like agriculture, SMEs and social investments.