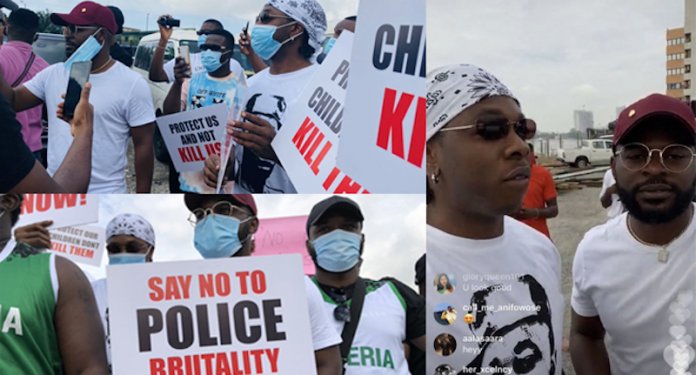 Nigeria is not left out of the benefits of social media in influencing government policies. This is evident in the ongoing protests against a unit of the Nigerian police force with the various hashtags such as #EndSars, #EndSarsNow, #EndPoliceBrutality that have taken over the social media space.

SARS, an acronym for Special Anti-Robbery Squad is a department in the Nigerian police force created some years back by former commissioner of Police, Simeon Danladi Midenda, to tackle the incessant armed robbery and other forms of crime. However, SARS as they fondly called, has lost its mandate and has evolved from the Special Anti-Robbery Squadto Special Anti-People’s Squad.
In 2016, Segun Awosanya, a human rights activist popularly known as “Segalink” on twitter, started the #EndSARS campaign on social media in protest against police brutality in the country. The #EndSARS movement garnered momentum online and led to the President Buhari-led administration ordering an overhaul of SARS in 2018.

Also, the Nigerian Vice-President ordered an immediate reform of SARS, citing the widespread public outcry against their conduct, as the basis for the order. He also directed the National Human Rights Commission (NHRC) to set up a judicial panel to investigate SARS alleged unlawful activities. Hours after the directive, the police authority announced a list of reform measures aimed at increasing SARS’ public accountability for its actions.

The measures include the change of name from Special Anti-Robbery Squad (SARS) to Federal Special Anti-Robbery Squad (FSARS), the appointment of high-ranking police officers to supervise the operation of FSARS and the restriction of FSARS operations to the prevention of armed robbery and kidnapping. Despite the promises of reform and accountability for violations, the F-SARS officers continue to subject detainees in their custody to torture and other forms of ill-treatment with impunity.

According to a report by the human rights group Amnesty International, there have been at least 82 cases of torture, ill-treatment and extrajudicial execution by the Federal Special Anti-Robbery Squad within the Nigerian police force between January 2017 and May 2020. Also, a report by SBM Intelligence, Nigeria’s leading geopolitical intelligence firm, shows major incidents, harassment and extortion that had been carried out by men of the SARS in the last 18 months. They also expressed their doubt on the possibility of reforming SARS without reforming the Nigerian police force.

Just like SBM Intelligence, Amnesty International believes that the ongoing impunity by F-SARS officers violating human rights only points to the decadent in policing practices and the absence of an effective police accountability system.
On 4th October 2020, the Inspector-General of Police, Mohammed Adamu in his usual manner, banned the personnel of the F-SARS and other ‘Tactical Squads’ of the Force from operating on Nigerian roads. The ban came on the heels of cries by Nigerians online who were calling for the abolishment of the police unit. The statement was not enough to calm frail nerves because Nigerian recall such statements had been issued in the past and the problem still persists.

The hashtag #LagosProtests is being used by Nigerians to share videos and photos of different gatherings across the country calling on the government to #EndSARSNOW. There are more than 2.4 million tweets with the hashtag #EndSARS as at the time of writing this article and the unrest is gradually building up because citizens and non-citizens alike in the diaspora are now joining the train to demand for an end of the “terrorist” police unit.

Just like the Occupy Nigeria protest that took place in 2012, Nigerians are united to fight a common enemy in SARS. This shows strongly the power of unity and what we can achieve when we come together to fight for a common course.
––Victor Ejechi is the Media and Communications Lead at StatiSense Consult Limited