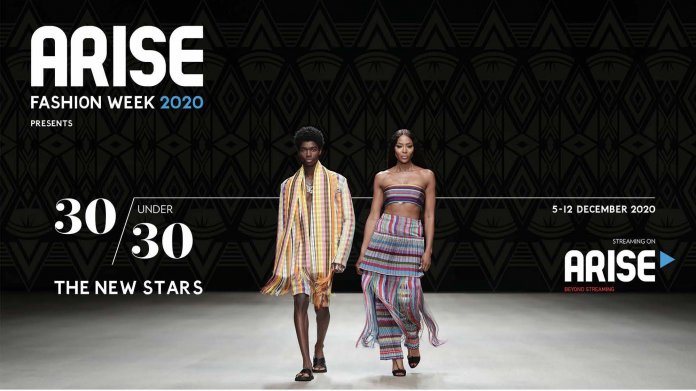 Africa’s leading fashion platform, the ARISE FASHION WEEK is unveiling the next generation of designers.

Described as the world’s best kept secret, the show will bring Africa on the world’s fashion map as it showcases the young , the talented and the daring in a move designed to reinvent global fashion during these challenging times.

A statement from the organizers of the event said the event which is scheduled for 5-12th December, 2020 in Lagos Nigeria will be streamed globally.

“If you are a self-confident designer, 30 years old, (or under the age of 30), and with a great look book, here is your chance to conquer the world of fashion, and displace established brands.”

Qualified designers are advised to immediately register at www.arisefashionweek.world. Applications and registrations will close at Midnight on Saturday 31st October, 2020.
A Selection Committee made up of global fashion icons and writers will shortlist the 30 who will compete for a chance to become the breakout stars of the new age.

Every edition of ARISE Fashion Week is a splash of style and colours, promoting the rich diversity of the cultures of the African people, and exhibiting an intellectual fest on fashion, culture and the creative arts.
It is the most prominent fashion show in Africa, known for handpicked curation of exclusive style. The continent’s fashion industry became truly global with the birth of ARISE, short for “Africa Rising”.