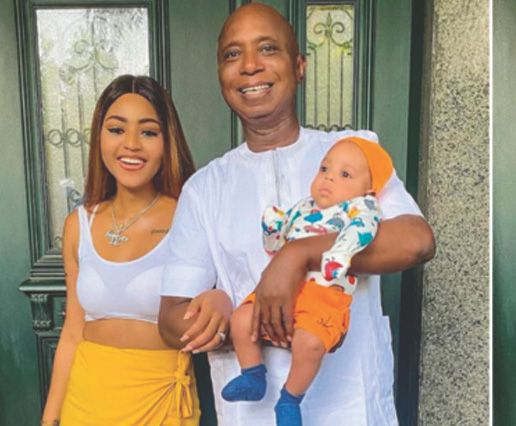 Nollywood actress, Regina Daniels and her billionaire husband, Ned Nwoko, are giving fans reasons to suspect that their relationship is facing some crisis. Early this week, they suddenly un-followed each other on Instagram. Ferdinand Ekechukwu digs in

Just about a year ago, precisely October, 2019, a movie titled The Enemy I Know was premiered in Abuja. The flick, which gulped millions of Naira, was produced by Nollywood personality Rita Daniels. Purportedly bankrolled by her in-law, Ned Nwoko, the movie has Rita’s daughter, Regina, who is Nwoko’s youngest wife, as Zara, the lead character. The Enemy I know is a dramatic tale of billionaire Anthony Adewale who died under suspicious circumstance, leaving members of his family scrambling for his wealth.

Barely a year after the cinematic narrative, a real life drama connecting the lead cast and a crew appears to be playing out. This time, it’s about Regina Daniels and Ned Nwoko’s union which seems to be in crisis. The Nollywood actress and her billionaire husband, Ned recently had fans talking about their marriage for the umpteenth time but for a new reason. This was after the couple un-followed each other on popular photo sharing app, Instagram.

The development came a few weeks after the mother of Regina sent a strong warning via a video message to actress Chika Ike, to leave her daughter’s husband alone or face her wrath. Chika had equally reacted that she was not interested in becoming a seventh wife to anybody. Regina fans took to the social media to react to the development.

As is common with many celebrity couples, un-following each other on social media platform is usually the first major sign of trouble! This has left their fans anxious on what could be going on behind the scenes. It is not clear why the Regina and Ned decided to pathways on Instagram as both parties have remained mute about the development. Regina and Ned got married in 2019 although she was criticized for becoming the sixth wife of a 59-year-old-man but her mother supported the marriage and stood by her.

Regina and Ned Nwoko welcomed their first child back in June 2020. The traditional ceremony took place on May 26, 2019, in Aniocha LGA, Delta State. While some people were worried that things might have turned sour between them, others felt that un-following each other was a publicity stunt and claimed that Regina actually handles her husband’s page. Could it really be the marriage is in crisis? Or could it be a publicity stunt as many celebrities would always do just to trend? Time will tell.

Of recent, a report had emerged that Regina took to social media to lament not having reliable friends. The mother-of-one took to her Snapchat to pour out her mind, saying she wished she had friends that could be there for her like she does for them. The young actress added: “It is only your family that can be there for you anytime.”

The report was on the heels of another report which claimed that one of Regina’s best friends, Cassie, was a threat to her marriage and allegedly tried to seduce her hubby. The situation got Regina infuriated and allegedly threw Cassie out and deleted her photos on her Instagram account. The source said: “Cassie is so in love with Regina’s hubby Ned Nwoko and could not control herself around him. One day, someone caught her alone with Ned and it looked ‘somehow’ as she had a strange look and Ned allegedly had a wet look on his Jalabia. Regina had been warned about Cassie but she did not listen and always maintained that she trusted her. Even Ned, had advised Regina severally to advise Cassie to dress appropriately but she always dressed like Regina around the house and wore very skimpy outfit. The person (Regina’s mother, Rita Daniels) who met her friend with Ned alone raised the roof and insisted Cassie must leave the house.

The source contacted Regina to find out if the allegations were true and she respectfully told her that her problems with anyone whether true or not should not be a topic for the internet. “I explained to her that my job as journalist is to balance what is whispered with her own side of the story if she is willing to give it and she said: ‘There are many fake stories about me that I can’t explain all but from now on any fake stories about me will be handled.’

“I asked her about all the rumour and she said: ‘it’s about my life and I don’t want to talk about it.’ I asked her why her hubby Ned Nwoko chased Cassie away and she replied: ‘I sent her away not my husband.’ I asked her if it was true that Cassie her former best friend had tried to seduce her hubby Ned Nwoko and she said she never did that.
Regina told the source further: “The case is different. It has nothing to do with my husband or anything; she is not that kind of person.”

The marriage to the former House of Reps member, Ned, no doubt has remained a thing of public attention. Even though there is a major age disparity between Regina and her husband, Ned, the two have never been shy to publicly show their affection.

Regina isn’t one to shy away on social media; hence it wasn’t long before she initiated her husband into the fierce world of celebrities where nothing is hidden. Ned, once speaking on his marriage to the popular actress acknowledged: “When I met her, I didn’t even know who she was because I don’t watch movies, whether British, Nigerian or American. Also, I am not a social media person. Up until that time, I didn’t have Facebook or Instagram accounts. So, I didn’t know about Regina until she came to my house with her family on a tour. My house in the village (Aniocha North Local Government Area, Delta State) is a tourist attraction of sorts.