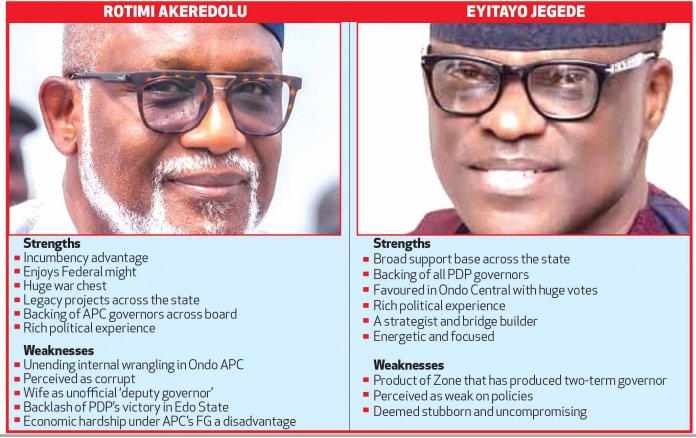 Tension remains very high across Ondo State as 1,478,460 voters file out in 3,009 polling units across the state this morning to decide who takes charge of the administration of their state in the next four years.

The election is a straight fight between incumbent governor Rotimi Akeredolu of the All Progressives Congress (APC) and Eyitayo Jegede of the Peoples Democratic Party (PDP).
However, the incumbent Deputy Governor of the state, Agboola Ajayi, contesting under the banner of the Zenith Labour Party (ZLP), is expected to play the role of a decider, whose extent of inroad into the strongholds of the two leading candidates – Akeredolu and Jegede – may decide their fortunes.

Akeredolu is from Owo in the Northern Senatorial District, Jegede is from Akure in the Central Senatorial District, while Ajayi is from the Southern Senatorial District.
An analyst noted last night: “Ajayi will determine who wins today. If he is able to take votes from Akeredolu’s strongholds and he is unable to do same in Jegede’s, then Jegede will win. On the other hand, if Ajayi is able to take substantial votes in Jegede’s stronghold and fails to do same in Akeredolu’s, then Akeredolu will win. It all depends on whom Ajayi takes votes from. He could tilt the victory either way.

Akeredolu’s running mate is from the Southern Senatorial District. He also has the strong structure of the Senator from the area, Ajayi Boroffice, three House of Representatives members and seven House of Assembly members. Substantial votes from the Ondo South seemed guaranteed for the incumbent governor, in addition to his Ondo North votes.
Jegede’s running mate is from Okitipupa Local Government, in the Ondo South District. So, he is also guaranteed votes there, in addition to his Ondo Central.

Meanwhile, incidents of violence and intemperate use of language had characterised the campaigns leading to today’s election.
As at press time, tough-looking security men were seen on the streets of Akure, the Ondo State capital, while residents, security agents and the Independent National Electoral Commission (INEC) have continued to plead with the political parties for a peaceful poll.

Several trucks and bus-loads of security personnel were deployed to various local government areas of the state yesterday afternoon. The Ondo State Police Command has also withdrawn policemen attached to high profile politicians.
Security agencies have assured the people of maximum security, urging them to troop out with confidence.

The Inspector General of Police, Mohammed Adamu, has already authorised the deployment of 33, 783 personnel to secure today’s election.
The personnel comprise Police Mobile Force (PMF) units, Counter Terrorism Unit (CTU), the Special Protection Unit (SPU), the Anti-Bomb Squad (EOD), Conventional Policemen, the Armament Unit, personnel of FCID and the Sniffer Dogs Section.
He said the police deployment would be complemented by an additional 3,500 manpower that will be drawn from other security agencies.

The IG said the personnel would be deployed to secure the 3,009 polling units in 203 Wards spread over the 18 Local Government Areas of the state.
He said: “Political actors and law-abiding electorate that are desirous of a peaceful election in Ondo State can rest assured of optimal security as they exercise their electoral rights.

“We are, by the deployment, sending a strong warning that the Nigeria Police and other security agencies are resolute to bring recalcitrant characters threatening the process to justice no matter their status in the society or political affiliation.”
Adamu had earlier deployed the Deputy Inspector General of Police in charge of Research and Planning, Adeleye Oyebade to administer the general security arrangement for the election.

Also deployed to assist the DIG are the Assistant Inspector General of Police in charge of Federal Operations (FEDOPS), Department of Operations, Force Headquarter, Karma Hosea Hassan and eleven 11 Commissioners of Police.
According to the police, restriction of vehicular movement in and out of the Ondo State will commence from midnight, till 6pm today. However, those on essential duties on genuine course will be granted passage.

A statement from the force HQ Abuja on the restriction reads: “The IGP reiterates that the vehicular restriction order, among other things, is aimed at preventing political actors and trouble-makers from freely engaging in unpatriotic acts – circulation and use of illicit arms and hard drugs, movement of political thugs from contiguous States to Ondo State and disruption of the electoral processes, etc – which are inimical to the dictates of the electoral laws.

“The IGP calls on residents of the Sunshine State to go out in their numbers on the day of the election and exercise their franchise. He assures that adequate security arrangement has been emplaced to secure the public space for the election.

“The IGP also enjoins the citizens to bear any inconveniences arising from the restriction order, noting that the order is part of necessary sacrifices we all have to endure to nurture and sustain democracy in the country. He however warns that anybody who engages in snatching of ballot boxes, vote buying, vote selling, hate speeches, and any other act capable of compromising the integrity of the electoral process will be brought to book.”

The Chairman of INEC, Prof Mahmood Yakubu has warned his staff against electoral fraud.
In a statement he signed, the INEC chairman also charged the staff of the commission to resist all temptations that could lead to electoral fraud and that would compromise the outcome of the Saturday election.

He said: “We must consolidate on our recent achievement and account for every single vote cast on 10th October in a transparent manner which will ensure that only the choice of the electorate prevails.

“I, therefore, implore all of you to resist any form of temptation and let your individual actions be guided by the extant laws and good conscience.
“Always remember that any unethical action by one lNEC official is capable of rubbing off on all of us. Remain vigilant, principled and committed to the mission and vision of the Commission.”

President Muhammadu Buhari has also assured Nigerians that today’s election will be free, fair and credible.
The president said he had taken a special interest not necessarily because his party was involved but because his focus and attention had been to ensure that the nation maximises every given opportunity to raise the bar in its desire to deepen democracy.

A coalition of over 400 civil society groups under the aegis of the Transition Monitoring Group has raised the alarm over the presence of serving and former governors from the APC and the PDP in Ondo State, claiming that their presence could undermine today’s election.

The TMG chairman, Dr Abiola Akiyode-Afolabi, at a pre-election press briefing in Akure said, “the refusal of these governors to leave the state constituted a threat to the peaceful and credible conduct of the election.”
Some of these governors are still in the state after their grand finale rallies on Wednesday in Akure and Ondo town.
The TMG leader said they could use their immunity to get involved in malpractices like vote-buying, intimidation and could also sponsor political violence.

This was disclosed exclusively to THISDAY by the National Commissioner in charge of Voter Education and Publicity, Festus Okoye, while explaining that the speculation and kite flying relating to the appointment of a Returning Officer for the Ondo election shows a limited understanding of the processes and procedures of the Commission.

Okoye said: “The Commission does not take dictation from political parties, groups or individuals in the appointment of its ad-hoc staff as well as Collation and Returning Officers.

“Moreover, the Commission will use the z-pad to upload polling units results into the INEC Result Viewing Portal and this will be available to Nigerians in real time.
“Furthermore, by the time the collation of results moves from the polling units to the ward and local government collation centres, all serious political parties are already in possession of the results and the collation of results at the State Collation Centre will be done publicly and beamed live to Nigerians.”

The Ondo Resident Electoral Commissioner (REC) Rufus Akeju who confirmed this, also expressed confidence that the commission was fully ready and prepared for the exercise which he promised would be free, fair and transparent.

Akeju said: “As we speak, everything required statutorily had been put in place for the registered voters in the state to vote for candidates of their choice on Saturday.
“In Addition, adequate security has been put in place by the commission in collaboration with security agencies through the Inter Agency Consultative Committee on Election Security (ICCES) to secure the voters. 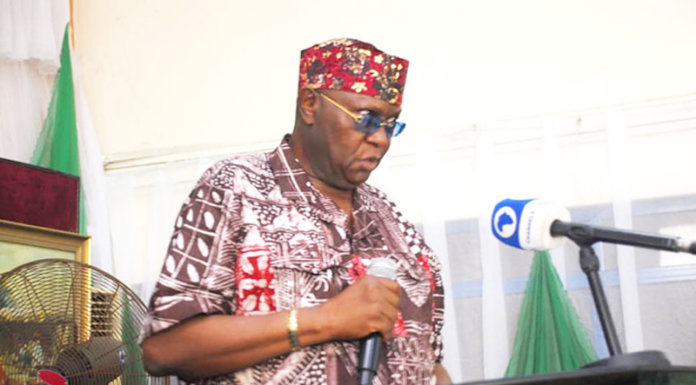