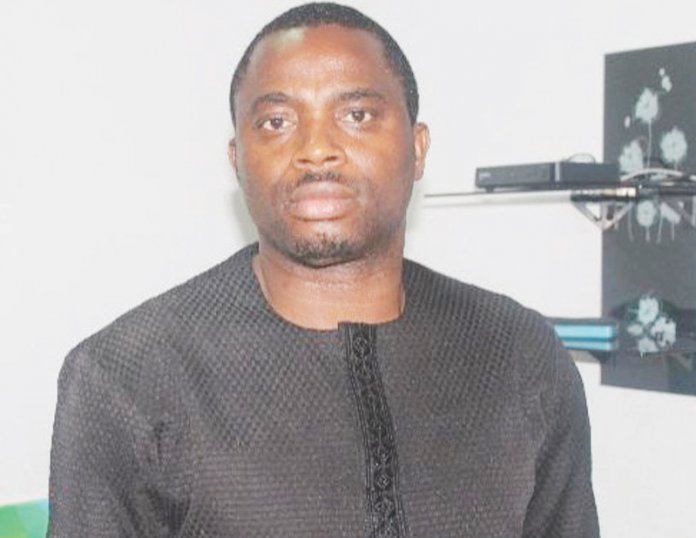 Kingsley James, the Chief Executive Officer, Indoor Design and Concept Limited (IDCLng), a 360-degree production company, which has handled some of the biggest red carpet events in Nigeria among other landmark projects, speaks with Festus Akanbi on his job experience, his family and the company’s journey in its five years in operation

You are a lawyer and an accountant. At what point did you decide to go into the branding and printing business?
When I graduated from the University of Jos, I actually wanted to be a businessman. I started my first job at a commercial bank, which my father ‘bullied’ me into accepting. It was at that time the banking industry was trying to be sophisticated by recruiting young ladies and guys with sharp suits but when I resumed, I wore Timberland boots and didn’t tuck in my shirt and my boss then told me I didn’t belong there. In four months, I left. I then went to an Information Technology company and started learning how business is done. I was there for two years before moving to Lagos to join Paul Usoro and Co which was the leading law firm in the telecoms sector then.

I was there for about nine years because the job was paying well, I was being exposed to big businesses and opportunities for the company but all along, my business kicks did not go down. Later on, I saw an opportunity at Digiprints (a company involved in advertising and branding) at a time that digital printing wasn’t popular in Nigeria. I worked there from 2002 to 2015. Even though some of the boys under me were leaving and starting their own thing, I promised the owner of the company that I would serve him as a matter of principle because I am a man who also wants to be served.

You noted that your father persuaded you to join the banking industry against your wish. What else can you say about your family background?
I have got one of the best fathers ever. He is not a Femi Otedola or a Dangote but he is a man who protects his name. My father didn’t have enough, so he suffered a lot to get us to where we are today. We lived in Jos at a point and my father told me to accompany him to go and collect a debt after staying two days without food. We trekked from Jos town to Bukuru. But when we got to the debtor’s house, the man was not there. So, we trekked back to Jos. When we got home we collected bread and tea from one Mama Mary on credit for two days. He went back to that woman to ask for another set of food on credit. That was the first time I saw my father cry and I told myself that if it was up to me, he would never cry again. I told myself that I will never be poor if it is up to me. It pushed me to become what I have become.

How did you meet your current wife?
My current wife, Adeola, was one of the ‘boys’. She was a producer and rolled with all of us when boys go out. She was one of the female-male that rolled with us, so we didn’t think we would get married to each other at all. I was married before but lost my wife. So, there was no thought anywhere that I was going to marry my current wife. I am a weakling for beautiful and intelligent women and my wife is both. She is very arresting. We started a conversation again. It lasted for about two years and we decided to get married five years ago, the same year IDCL started. We have a kid together but I had other kids before that time. I was jobless but she decided to marry me in spite of that. People who know my wife know she is completely sophisticated. She wasn’t brought up in this country. How she ended up with me, I can’t even fathom. Each time I look at her, I just wonder and say, ‘God, thank you.’ I’m just grateful for the grace that God gave me to have her around.

How does it feel being married to the daughter of a popular veteran broadcaster, Mrs Bimbo Oloyede?
My mother-in-law, Bimbo Oloyede, and I have gone almost everywhere, including the house of a former president. The Oloyedes brought up their children in a manner that makes them understand that everything is transient and that they should build themselves and not ride on their parents’ achievements. They don’t see themselves as superstars. But you can’t play down the hard work that earned them that name. When she left Channels TV and a party was organised for her, her boss, John Momoh, said she was the only broadcaster he knew that had no single scandal. That might have meant nothing to her but it meant a lot to me because, in the eyes of the public, it is very rare.

What were the challenges you faced when you started your company?
I had a very tough beginning. The business is very capital intensive. I had a proposal of almost a billion naira for what I needed for the business. I was confident that there wouldn’t be any problem because I believed I had the market in my hands, despite the little competition at the time. I was optimistic that people would invest heavily in the idea. I went to banks and individuals but not a single person supported me or the idea. So, I went to a microfinance bank and took a loan at 11 per cent interest per month to buy my first machine. But, that loan did not pay for the machine. I went to a gentleman called Akin Oduwole, who gave me the machine on half payment. So, I used the rest of the loan to pay for a small office space to start something.

For the first two years, I was servicing loans. Another microfinance bank said it could offer me a loan at an eight per cent interest rate, so I quickly closed my loan with the previous bank. I also moved to another microfinance bank that gave us a five per cent interest rate per month. That was how we kept running at the beginning until we were able to pay back the loans. We started growing and then we opted out of the microfinance bank. Then we moved to commercial banks and we had a bit of a problem with them too. They told me that I didn’t have an account with them or they did not know me or my business so they couldn’t give us loans. Those are the things that kill businesses in Nigeria. However, the market trusted us and we started growing. I think our banks are not wired to support businesses and it saddens me. A lot of dreams are dying not because they are not good ideas or viable but because the banks’ position today starts with a question – what if the idea fails? The bank doesn’t come with the position of what if the idea succeeds. And those two positions are very strong.

How would you describe IDCL’s journey five years after?
It has been fantastic. We have looked at the brighter side of the business. We’ve grown and expanded. We started as a two-man entity. We’ve grown to a direct staff strength of over 50 and we have an indirect staff strength of over 150. We’ve grown from just a printing firm to a company that is now involved in five or six different kinds of businesses. So, as an organisation, we have grown vertically and horizontally. We have also experienced tumultuous times; we are happy that we survived them all. Indeed, we even survived the latest one that is global, which is the COVID-19 pandemic. So, we are here to God be the glory. It has been a fantastic journey.
Pix: Kingsley James.jpg