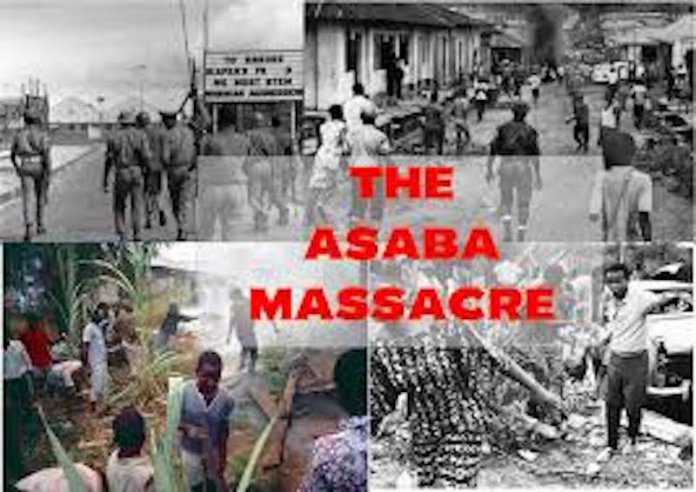 Precisely 53 years after the first black-on-black genocide now termed ‘’Asaba Massacre’’, the Asagba of Asaba, Professor Chike Edozien yesterday approved the construction of a fitting cenotaph in memory of the victims.

Recounting snippets of the encounter which he said “obliterated two generations of all the educated people in Asaba.” HRM Edozien also demanded for the establishment of a federal university in Asaba.

Although Gen. Yakubu Gowon who was the then Head of State when the massacre was perpetrated had apologised, several years after the war, the Asagba regretted that ‘’although we accepted the apology, the proper official apology and compensation has yet to come.’’
“An event of this magnitude has impacted the Asaba community and that is why we are remembering this sad history. It is our prayer that a federal university be established in Asaba in recognition of this event,’’ he said.

Meanwhile, the Olubadan of Ibadan, HRM Oba Saliu Adetunji sympathised with the people of Asaba on the genocide remembrance and prayed that for the bonds between Asaba and Ibadan to grow by leaps and bounds.
In her remarks, a red-cap chief of the Palace, Chief Theodora Giwa-Amu, echoed the sentiments raised by Ify Iloba on the recognition of female victims of the massacre, which the monarch took cognisance of.

Responding, the Chairman of the 2020 genocide remembrance planning committee, Chief Chuck Nduka Eze, announced the approval of the Asagba for the erection of a fitting memorial cenotaph at Ogbeosowa Square to honour the fallen heroes.

In his lecture titled ‘’Asaba October 7: Consequences of Silence’’ a professor of Political Science, at the University of Ibadan, Osisioma Nwolise, traced extrajudicial killings in the country to the negligence of the 1967 Asaba massacre and the lopsided structure of Nigeria’s federalism.

Other speakers at the event include the monarch of Idumuje-Unor, HRM Obi Charles Anyasi, a renowned environmentalist, Chief Newton Jibunor and the Ikemba-designate of Asaba, The Director of Programme, Chief Emma Okocha among others who reflected on the Asaba Massacre and its consequences.