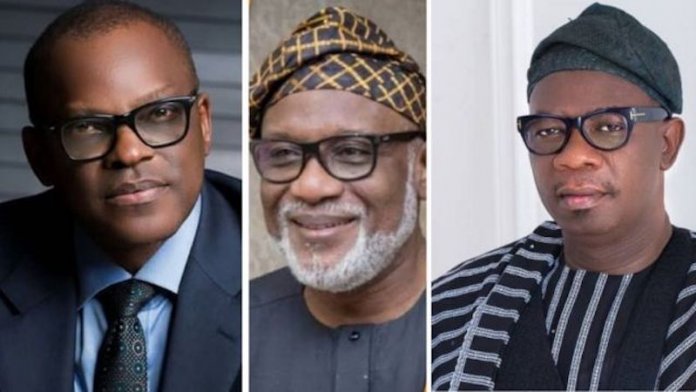 Governor Oluwarotimi Akeredolu (SAN) of the APC, PDP’s Eyitayo Jegede (SAN), and Deputy Governor Agboola Ajayi of ZLP yesterday closed down their campaigns, retreating to their war rooms to strategise on the deployment of officials that would monitor the election and ensure that their votes count.
Already, the Chairman of Independent National Electoral Commission (INEC), Prof Mahmood Yakubu, has warned his staff against electoral fraud in the election, warning that the full weight of the law would be brought down any perpetrators of electoral manipulation.

He spoke just as the PDP rejected the appointment of the Vice-Chancellor of the Obafemi Awolowo University (OAU), Ile-Ife, Prof. Eyitope Ogunbodede, as the chief returning officer of Saturday’s governorship election in Ondo State.

The Chairman of the PDP National Campaign Council and Governor of Oyo State, Mr. Seyi Makinde, stated this yesterday at a press conference in Akure, the Ondo State capital.
The party also called on President Muhammadu Buhari to call Kogi State Governor, Mr. Yahaya Bello, to order, over his alleged open incitement of violence and alleged importation of thugs to attack the Ondo people with a view to undermining the governorship election.
Makinde said Ogunbodede was a known ally of Akeredolu and also hails from Owo, the hometown of the Ondo State governor.

The Oyo State governor said the people of Ondo would not be getting free and fair elections with the present composition of the INEC.
Makinde who insisted that Ogunbodede would not be a fair party in the proceedings by virtue of his association with Akeredolu, called on INEC to immediately replace him.

Makinde also said the Deputy Vice-Chancellor (Academic) of OAU, Prof. A S Bamire, who conducted the training of returning officers was not a neutral party for the purpose of tomorrow’s election.
The Oyo State Governor threatened that anybody that attempted to rig the election would be reported to the international community.

He noted that their reason for crying out was because once the returning officer made a pronouncement, nothing else could be done other than go to the tribunal.
He queried: “Why did INEC bring somebody from Owo? Why go to OAU? Are there no other universities?”
He said the PDP didn’t want Ondo people to be cheated.

Makinde said: “We also take this opportunity to call on all lovers of democracy around the world to pay attention to what the APC-led administration in the centre is trying to do in Ondo State. We call on the United Nations, the European Union, the United States and the United Kingdom and indeed all allies of democracy to call INEC to order.

“We call on all security agencies in Ondo State not to allow themselves to be used as a tool against the will of the people. We commend you for all you have done so far providing the needed support and security for our candidate and our people.
“We urge you to do more. Don’t forget that history and posterity have never been kind to anyone who allowed themselves to be used as a tool for injustice. We urge you to read the mood of the people and act accordingly.”

He called on Buhari to call Kogi State Governor, Bello, to order over alleged incitement of violence and importation of thugs to attack the Ondo people with a view to undermining tomorrow’s governorship election.

He said: “About three weeks ago on the eve of the Edo State Governorship election, I appealed to the hardworking staff of the Commission to rise to the occasion and deliver a free, fair and credible process in accordance with our established policy.

“Indeed, our staff members, assisted by the security agencies and other critical stakeholders, did not spare any effort in ensuring the successful conduct of the election.
“Clearly, Nigerians and friends of Nigeria are pleased with the outcome and we are encouraged by their commendations.

“However, we cannot afford to rest on our oars. Another end-of-tenure governorship election is upon us. There is now an even higher expectation on Ondo State.
“We must consolidate on our recent achievement and account for every single vote cast on 10th October in a transparent manner which will ensure that only the choice of the electorate prevails.

“I, therefore, implore all of you to resist any form of temptation and let your individual actions be guided by the extant laws and good conscience.
“Always remember that any unethical action by one lNEC official is capable of rubbing off on all of us. Remain vigilant, principled and committed to the mission and vision of the Commission.”