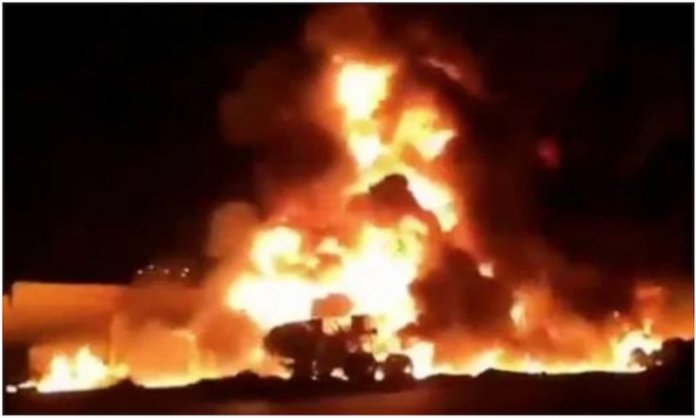 The Lagos State Governor, Mr. Babajide Sanwo-Olu, and the Nigerian National Petroleum Corporation (NNPC) have expressed deep sorrow over the incident.
Sanwo-Olu, who described the incident as a sad memory in the life of his administration, blamed negligence on the part of the gas plant operators for the explosion.
Preliminary assessment of the explosion put the damages at 89 shops, 44 buildings, including a church, school and event centre, 23 electric poles, two transformers, gas tankers, one tricycle and one motorcycle.

According to an eyewitness account, the explosion occurred at 6.20 am at Candos Road, Baruwa Inside when an LPG (Liquefied Petrol Gas or cooking gas) tanker, which was discharging at the Best Roof Plant Station, exploded.
THISDAY gathered that the source of the explosion could be traced to the station’s power generator, which was supplying power while the tanker was discharging products into the storage tank.
It was learnt that when the explosion occurred, it threw those nearby and the discharging LPG tanker across the road, thus exacerbating the fire.

Confirming the incident, the South-west Zonal Coordinator for the National Emergency Management Agency (NEMA), Mr. Ibrahim Farinloye, said emergency services were quickly deployed to contain the inferno.
He said five bodies had been recovered so far, while three injured persons, including a woman and two children had been evacuated and taken to the intensive care hospital due to the degree of burns.
He said the destruction was on a large scale because the Best Roof Gas Plant Station was located in a densely populated community.

After putting out the initial fire, he said the stored gas in the station started discharging but there was no explosion again.
THISDAY gathered that the gas plant has about 30 metric tonnes of gas in the underground tank, and while it was offloading, the workers were also dispensing to customers.

Farinloye noted that as at 9.04 am, the fire was put out completely, while the secondary gas leakage from the underground tanker was put under control.
However, he said a preliminary assessment has revealed that 44 buildings were affected, as well as one school, one event centre, 89 shops, one church, one tricycle, gas tankers, 23 electric poles, two transformers and one motorcycle.

He added: “The eight casualties with major burns are currently being treated at the Gbagada General Hospital Burns Unit, while the five bodies recovered have been deposited at the mortuary.”
Farinloye debunked the reports making rounds that eight people have been confirmed dead in the explosion, saying: “Even the police chief and others were there with us. We found five bodies only. The others are still alive and being treated.”

According to the zonal coordinator, the gas valve has been opened to release the gas to avert another explosion while firefighters are blanketing the whole area.
Speaking also, the DG/CEO Lagos State Emergency Management Agency (LASEMA), Dr. Olufemi Oke-Osanyintolu, encouraged the residents of Lagos State to report unsavoury and dangerous practices within their neighbourhoods to the relevant agencies.

“Reports should go to such agencies as the Lagos Safety Commission, and Lagos State Environmental Protection Agency, so that the government can engage in more prevention and precautionary measures including issuing contravention notices and sealing up premises to prevent these types of disasters,” he said.

According to the LASEMA boss, the post-disaster assessment shows that five persons died; 25 houses damaged including 10 classified as severely affected; 16 shops razed; one private primary school; one hotel; three vehicles comprising a pickup truck, tricycle and a motorcycle were affected.
While clearing and securing of the affected areas by joint teams of responders is ongoing, the State Commissioner of Police, Mr. Hakeem Odumosu, the RRS team and other police units were also on the ground to control the situation.

Meanwhile, Sanwo-Olu and the NNPC have expressed deep sorrow over the incident.
Sanwo-Olu said the preliminary and final reports on the cause of the explosion suggested negligence on the part of the gas plant operators, noting that the government would take stiffer measures against operators of gas plants and/or any combustible items in the state to avoid future recurrence of such a disaster.

He said: “The gas explosion this morning has left a sour taste in my mouth. It is a reminder of the dark episode of March this year at Abule Ado Soba when innocent lives were lost to gas explosions of monumental proportion and properties destroyed. I really can’t believe that we would witness another such incident, no matter how little.

“I wish to, therefore, register my heartfelt condolences to the families of those that lost their loved ones in the fire. I pray that God grant their souls eternal rest.”
NNPC has also commiserated with the government and people of Lagos State, and particularly the residents of Baruwa area, on the gas plant fire incident.

A statement yesterday by the corporation’s Group General Manager, Group Public Affairs Division, Dr. Kennie Obateru, stated that NNPC feels particularly sad at the loss of lives and property, caused by the incident barely a few weeks after a similar incident at Iju Ishaga area of the state.

It assured that though NNPC’s pipelines were not anywhere close to the location of the incident, the corporation swiftly mobilised its Health, Safety and Environment (HSE) Team, in collaboration with other relevant agencies of Lagos State government and ensured that the situation was promptly brought under control.