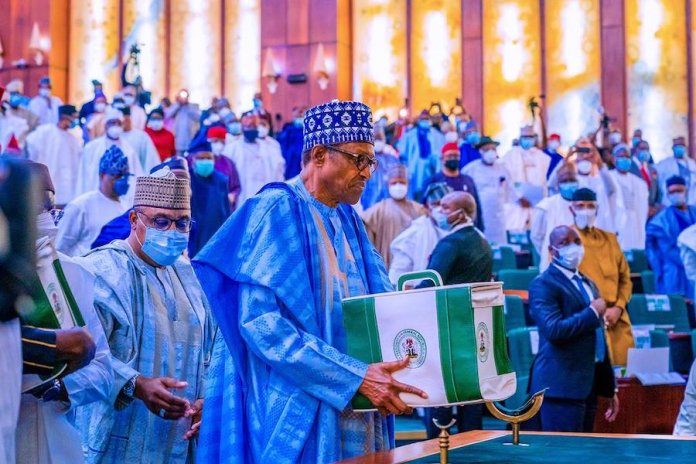 Economic and financial experts have suggested swift implementation of a combination of fiscal, structural and investment policies to reduce the adverse effects of the looming second recession and get the economy on the path of a quick recovery.
President Muhammadu Buhari had yesterday predicted that the country’s economy may lapse into the second recession in four years, with the projected negative Gross Domestic Product (GDP) growth in the third quarter of this year.

Buhari, who disclosed this when he presented a N13.08 trillion budget proposal for the 2021 fiscal year to the joint session of the National Assembly, however, assured Nigerians that his government will do everything possible to get the country out of recession in 2021.

While the All Progressives Congress (APC) has commended the president for the presentation of the proposal, the opposition Peoples Democratic Party (PDP) caucus in the Senate has condemned it, describing the estimates as stale and uninspiring.
However, the President of the Senate, Dr. Ahmad Lawan; and the Speaker of House of Representatives, Hon. Femi Gbajabiamila, have promised a speedy passage of the estimates.

Buhari stressed that the economy is currently facing serious challenges, with the macroeconomic environment being significantly disrupted by the Coronavirus Pandemic.
The president explained that GDP growth declined by 6.1 per cent in the second quarter of 2020, adding that this ended the three-year trend of positive, but modest GDP growth recorded since the second quarter of 2017.

He, however, said: “I am glad to note that, through our collective efforts, our economy performed relatively better than that of many other developed and emerging economies.
“GDP growth is projected to be negative in the third quarter of this year. As such, our economy may lapse into the second recession in four years, with significant adverse consequences. “However, we are working assiduously to ensure rapid recovery in 2021. We remain committed to implementing programmes to lift 100 million Nigerians out of poverty over the next 10 years.”

Buhari noted that the 2021 appropriation with the theme, “Budget of Economic Recovery and Resilience” is designed to further deliver on the goals of Economic Sustainability Plan.
The president said the exchange rate has been fixed at N379 per US dollar; while the GDP growth is projected at three per cent and inflation closing at 11.95 per cent.

He proposed an aggregate expenditure of N13.08 trillion, including N1.35 trillion spending by Government-Owned Enterprises and Grants and Aid funded expenditures of N354.85 billion.
He said the 2021 budget deficit (inclusive of Government-Owned Enterprises and project-tied loans), is projected at N5.20 trillion, representing 3.64 per cent of the estimated GDP, slightly above the three per cent threshold set by the Fiscal Responsibility Act, 2007.

“It is, however, to be noted that we still face the existential challenge of Coronavirus pandemic and its aftermath,’ he said, adding: “I believe that this provides a justification to exceed the threshold as provided for by this law. The deficit will be financed.”

According to him, “As you will observe, the format of the 2021 Appropriation Bill has been modified to include budgeted revenues, no matter how small, for each MDA, to focus on internal revenue generation.
“Accordingly, I implore you to pay as much attention to the revenue side as you do to the expenditure side in the Planned 2021 Expenditure.”

The President explained that the budget deficit would be financed mainly by new borrowings totalling N4.28 trillion, N205.15 billion from privatisation proceeds and N709.69 billion in drawdowns on multilateral and bilateral loans secured for specific projects and programmes.
He stressed further that the sum of N484.49 billion provided for Statutory Transfers in the proposal represent an increase of N56.46 billion (or 13 per cent) over the revised 2020 provision.

The president stated further that personnel cost remains the largest single item of expenditure, saying the seven months to July 31, 2020, it accounted for 34 per cent of total federal government spending and is projected at 33 per cent of 2021 expenditure.

He assured that his government remains committed to meeting its debt service obligations.
“A total of N2.183 trillion has been set aside to service domestic debts while N940.89 billion has been provided for foreign debt service. N220 billion is provided for transfers to the Sinking Fund to pay off maturing bonds issued to local contractors and creditors,” he said.

The president, however, urged the National Assembly to expedite action on the passage of the budget.
Speaking earlier while welcoming the president for the budget presentation at the House of Representatives chamber, President of the Senate, Lawan, said the 2021 Budget would be targeted at consolidation of gains made by the 2020 Budget which was targeted at sustaining growth and jobs.
According to him, the fiscal plan would be influenced by the desire to consolidate on the gains, coming from the hard lessons of the pandemic, and on the urgency of sustaining our diversification programmes, not only because of the unpredictable nature of oil revenue but because of recent uncertainties arising from the coronavirus.

He also called for critical examination of revenue collection and remittances, saying that the impact of Covid-19 has revealed the vulnerability of the country’s economy as a monolithic, oil-dependent economy.
Lawan further said the eventual passage of the Appropriation Bill 2020 and signing into law in record time was a clear testimony of the benefits of the Legislature and the Executive working together for the good of the people.

”The National Assembly is again ready to pass the 2021 Budget before the end of the year. This will continue to enable planning and enhance productivity and efficiency in the management and application of our resources. We can all bear witness to the salubrious effects of the early passage of the budget on our economy,” Lawan said.

Also speaking while giving the vote of thanks, Speaker of the House of Representative, Gbajabiamila, declared that all Ministries, Departments and Agencies (MDAs) who come to the National Assembly to defend their budget proposals would do so without their security details present.
He explained that this is to prevent the unacceptable proliferation of side-arms in the hearing rooms during such engagements, and in adherence to the Covid-19 social distancing protocols.
Gbajabiamila also assured Nigerians of speedy passage of the 2021 Appropriation Bill laid before the National Assembly.

According to him, the lawmakers will collaborate with the Ministries, Departments and Agencies of the Executive to deliver a budget that meets the needs and matches the ambitions of the Nigerian people.

Following Buhari’s alarm of looming second recession, a Professor of Economics at the Akwa Ibom State University, Professor Akpan Ekpo, told THISDAY yesterday that the recession would affect both the demand and supply sides of the economy that the traditional Keynesian demand solution alone would not work.

Ekpo said that it would be important for the government to increase its capital and recurrent expenditures because of the need to stimulate consumers’ aggregate demand during the recession by enabling them to have money to spend.
He said: “Public spending must be increased. But there should be more proportionate increase in capital expenditure than the recurrent expenditure. This will take care of the demand side. So it is time for stimulus and not time for austerity. Government has to pump money into the economy to reflate it.

“But on the supply side, we need to have in place policies that will attract investors to come into the economy. And first of all, the government must deal with the issue of insecurity. No matter how much-interested investors are in the country they will not go to where they will not be secured.”
Speaking in the same vein, the Chief Executive Officer of BIC Consultancy Services Limited, Dr. Boniface Chizea, said that the right way for the government to address the coming recession is to roll out palliatives and implement the programmes it has designed like the Economic Sustainability Plan (ESP) diligently.

“There are already programmes to create 1,000 jobs in 774 local governments and if you go back to the Economic Sustainability Plan and implement them and the Central Bank of Nigeria (CBN) comes in with its package then we can avoid much of the problems.

“The major thing is for the government to implement the plans it already has. The problem we have is always poor implementation. We have never come short of having programmes and plans but our problem is that we put them done and never implement them. There is no other magic bullet that we will be looking for other than the committed implementation of policies,” Chizea said. Commenting on the feasibility of the proposal in a chat with THISDAY, Professor of Finance and Capital Markets at Nasarawa State University, Prof. Uche Uwaleke said: “I also think the real GDP growth rate projected at three per cent is a little ambitious in view of the impact of COVID-19 on the economy expected to linger till next year. This is why the recent Fitch report on Nigeria projects a GDP growth rate of 1.3 per cent for the country in 2021.”

Also speaking to THISDAY, Managing Director/Chief Executive, Credent Investment Managers Limited, Mr. Ibrahim Shelleng, raised objection to the exchange rate parameter, adding that it was not well considered.
Former Director-General of the Abuja Chamber of Commerce and Industry (ACCI), Dr. Chijioke Ekechukwu, however, argued that the budget proposal was an invitation to “more deficit financing and more borrowing.”
He expressed concern that in spite of the country’s dwindling economy, the government’s expenditure continued to rise with an increased budget.