Ahead of the Saturday’s governorship election in Ondo State, the Chairman of the Independent National Electoral Commission (INEC), Prof. Mahmood Yakubu, has raised the alarm over the tensions threatening the Saturday poll.

Meanwhile, the United States has urged all stakeholders in the democratic process, including the INEC, political parties, and the security services to take concrete steps to ensure a free, fair, transparent, and peaceful election in Ondo State.

Speaking yesterday in Akure, the Ondo State capital, during the signing of the peace accord, the INEC chairman stated that by their continuous and consistent engagement for peace in Nigeria, members of the NPC have, once again, demonstrated that moral suasion is as important as statutory authority in promoting peaceful co-existence and nation-building.

The event was witnessed by the Sultan of Sokoto, Alhaji Muhammadu Sa’ad Abubakar III; His Eminence, John Cardinal Onaiyekan; Bishop Matthew Kukah and other eminent members of the NPC.

Yakubu declared that the charged atmosphere threatening Saturday’s election in the state demands that political parties and candidates should affirm, respect, support, promote and commit to peaceful elections.

“Unfortunately, the Ondo State governorship election holding this Saturday is generating its own tensions,” Yakubu said, explaining: “The charged atmosphere demands that political parties and candidates should affirm, respect, support, promote and commit to peaceful elections which, I understand, are the five cardinal pillars on which the Peace Accord rests.

He added: “Without peace, our deployment plans, new innovations in result management, the safety of personnel, security of materials and, above all, the credibility of elections will be undermined.

“Even worse, public health will be jeopardised as the observance of safety protocols in the context of the COVID-19 pandemic will be impossible to achieve in an atmosphere of disruption, violence and disorder.

“It is, therefore, important for everyone to maintain peace. I wish to assure the Peace Committee of INEC’s commitment to transparent and credible elections.

“The votes will count. I call on all political parties and candidates to abide by the letter and spirit of the Peace Accord by appealing to your supporters to maintain the peace before, during and after the elections.”

“Citizens should know that nothing could be achieved without peace. So, during this election citizens are urged to abide by the COVID-19 regulations and keep the process safe,” he said.

The Sultan of Sokoto, Abubakar, urged the candidates to abide by the peace accord.

“I will like to call on you not to see the signing of this Peace Accord as just a mere ceremony formality but as a commitment by all of you, in fact, a covenant by which you will be held responsible for the outcome at the end of the day,” he said, urging: “I want to call on you once more to obey the rules of the game. I call it a game because I see the election as a game where there must be a winner. There must be one winner who has already been ordained by the Almighty God before the casting of the first ballot and we do not know the person.”

The Inspector-General of Police, Mr. Mohammed Adamu, represented by the Deputy Inspector General in charge of Research, Mr. Adeleye Oyegbade, assured the people that the Police will improve on the achievements they recorded in the Edo State election by protecting the process.

Speaking after signing the peace accord, the candidate of the ZLP, Ajayi, said: “Let me join everybody to appreciate our leaders; let me use our former Head of State, Gen. Abdulsalami Abubakar, as a point of contact to appreciate all members of the Peace Accord.

“Having said that, I want to let all of us know that our party, the Zenith Labour Party, has always, and will continue, to conduct ourselves in a most peaceful and democratic manner into this exercise; we have started and the whole world is watching all of us, you have never one day noticed our campaign train attacked and we never attacked anybody.

“We will continue to appeal to those attacking themselves to see the election as a democratic programme that is set out with an agenda that is guided by rules and democratic guidelines. We are praying that on the October 10 that our votes will count.

“Once again, let me say that nobody’s ambition is worth the blood of any citizen.”

Jegede of the PDP commended the committee for the commitment to peaceful elections in the country He said: “Let me give a firm commitment on behalf of the PDP, which I have the privilege and the honour to represent in the election coming up on the 10 of October to say that we are convinced on the need for peace not only in Ondo State but in the entire country.

“Let me also say that for me as a person, I am absolutely committed to a peaceful election, before the election and even after the election, when the results have been announced. I say that there is no option for us other than to follow a peaceful process.

“I implore our security agencies, especially the Police to ensure that they comply with the rules, it is not enough to say that you want to be neutral, neutrality may mean staying aloof and not interfering.

“I urge you as security agencies to ensure that you comply with all the provisions of the law, including making arrests of those who have cultivated the habit of the destruction of other people’s property and those who are engineering violence, in the cases we have in Ondo State.”

Also speaking, the state governor and candidate of the APC, Akeredolu, pledged to abide by the provisions of the peace accord.

He said: “What we have done this morning is to sign peace accord; the content that was read out to the hearing of everybody and not only for us. Let me again solemnly make my pledge that I will abide by what was signed.

“I want to thank the National Peace Committee. This won’t be our first election, at least for me this will be the third and last time that I will contest election in Ondo State. In the last two occasions, all of us were operating as brothers and I cannot recollect any violence in those two elections but if we have one or two issues here and there, it is not to say that Ondo State people are violent.

“I can assure you that Saturday’s election will be peaceful, as long as the Police are there. For me as the governor of the state, I will still address the people on the need for peace.”

US Calls for Peaceful Poll

Meanwhile, the United States has called on all the stakeholders in the democratic process, including the INEC, political parties and security services to take concrete steps to ensure a peaceful election that reflects the will of the people of Ondo State on Saturday.

The US Mission in Abuja in a statement issued yesterday said: “The United States urges all stakeholders to continue to work towards free, fair, transparent, and peaceful elections in Ondo State.

“We reiterate our hope that all participants in the democratic process, including the INEC, political parties, and the security services will take concrete steps to ensure a peaceful election that reflects the will of the people of Ondo.

“The United States remains committed to the U.S.-Nigeria partnership as we work together to achieve our mutual goals of peace and prosperity for the citizens of both our countries.”
It would be recalled that when the Edo State governorship election was approaching, the US had threatened visa ban on election riggers.

In a related development, an assessment team sent by the APC National Campaign Committee on the Ondo State gubernatorial election has projected a 55-58 per cent margin of victory in favour of incumbent governor, Akeredolu.

A member of the team, who is also the Director-General of the Voice of Nigeria, Mr. Osita Okechukwu, disclosed this yesterday at a media briefing in Abuja.

The team also dismissed fears that the alliance of 11 political parties will stop the victory of Akeredolu.

The VON DG said: “The APC National Campaign Committee sent some of us to Ondo State for on-the-spot assessment of our chances. We spent seven days mingling with people of all classes and cadre. To be frank, without being immodest, Aketi’s chances of winning the election hover between 55-58 per cent.

“Take this to the bank and please permit me to name some projects to be executed and the ongoing ones.

“Infrastructure-wise, he has performed creditably well in Akure, building roads, schools, and hospitals amongst others. In road construction, he has completed 125 kilometres of roads and work is ongoing on 279 kilometres, to be completed in his second tenure.” 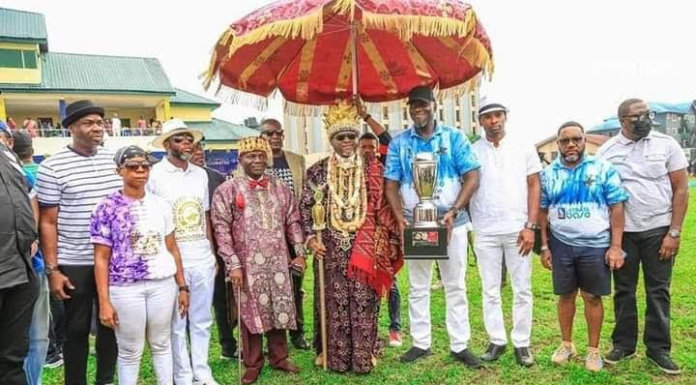