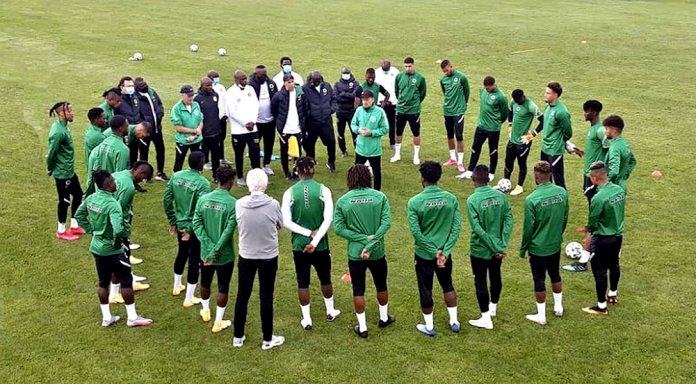 *All 26 players now in camp. Train twice on Tuesday in new NIKE kits

Both players missed the morning training but were part of the afternoon session. Musa has not seen action in his Saudi Arabian club since returning after the Covid-19 lockdown to spark off speculations he could be on his way out of the team. Onuachu on the other hand was a late call up for Victor Osimhen who is on 14-day isolation with the rest of his Napoli teammates in Italy.

Media Officer of the team, Toyin Ibitoye confirmed to THISDAY last night that all the expected 26 players were now in camp ahead of the friendlies with Algeria and Tunisia on Friday and Tuesday next week respectively.

“Both Ahmed Musa and Paul Onuachu were the last two players to arrive camp yesterday as Super Eagles begin training ahead of the international friendlies with Algeria and Tunisia,” stressed the spokesman of the team.

He confirmed that the team under the watch of German Gernot Rohr trained twice on Tuesday and will repeat the same regime today.

Ibitoye admitted the mood in the Eagles camp was really good as both old and new players bonded like one family.

According to other camp sources, former Germany U20 Captain, Kevin Akpoguma who FIFA gave nod to his switch to play for Nigeria at the weekend, is likely to make his debut against Algeria on Friday.

“We are also excited by the youthful four goalkeepers in camp here in Austria. This has created room for competition for who to claim the number one jersey as we build towards the AFCON 2022 qualifier next month,” observed top official in Austria.

Dele Alampasu of FK Ventspils (Latvia). The keepers are been put through their paces by former Super Eagles goalkeeper, Alloy Agu.

Some of the players took to the social media to express their happiness at the new NIKE kits shipped into Austria for their use in the two friendlies.

They looked radiant and cool in the new designed training gear both in the morning and at the afternoon training sessions.

CD Legane defender in the second tier Spanish league, Kenneth Omeruo said on Twitter yesterday: “A light one… good to link up with the boys.. Loving this new kits from @nikefootball #Nike #omeruo #rainbow #supereagles @ Blumenhalle St. Veit,” Omeruo tweeted with his photo in the new NIKE kit.

The Super Eagles will take on reigning African champions Algeria on Friday night, before they take on second-ranked Tunisia on Tuesday next week.

ALL THE PLAYERS IN CAMP YESTERDAY