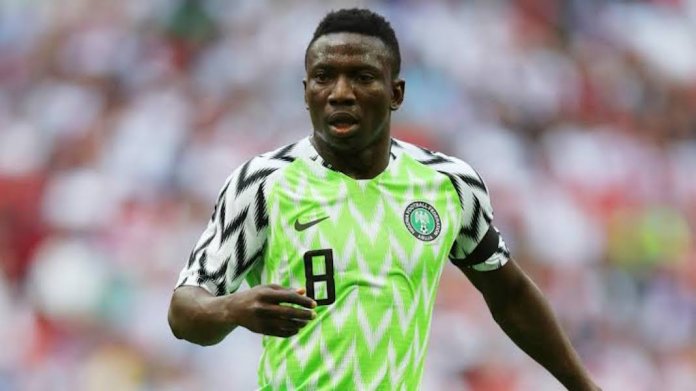 Turkey-based midfielder, Oghenekaro Etebo has joined the duo of Wilfred Ndidi and Victor Osimhen as players who will be sorely missed on Friday when the Super Eagles file out against AFCON 2019 champions Algeria in an international friendly in Austria.

Etebo who switched from Spanish club Getafe to Galatasaray in the Turkish topflight last month suffered a knock in club training on Sunday and is effectively ruled out of the clash with the North Africans in the two friendlies listed for the Austrian City.

Ndidi has been sidelined for weeks since picking up a groin injury early last month while Osimhen and his Napoli teammates are undergoing 14-day quarantine after almost the entire Genoa team they played penultimate Sunday tested positive for the Covid-19 virus.

Feelers from Eagles camp in Austria hinted last night that defender Kenneth Omeruo and forward Moses Simon were among the early arrivals at the team’s Hotel die Zeit an der Glan in Austria on Monday morning.

Right behind them were goalkeeper Dele Alampasu, defender Jamilu Collins, midfielder Frank Onyeka and forwards Cyril Dessers and Alex Iwobi. The other invited players were being expected in camp by last night.

Also, as he countenances imminent approval of his international switch to the Super Eagles of Nigeria, former Germany U20 captain Kevin Akpoguma has arrived at the team’s hotel in Austria to familiarise with the Nigeria set-up and bond with the other players.

It is the first gathering of the Super Eagles this year, with the coronavirus pandemic shutting down football globally since the month of March, just before a quick-fire double AFCON qualifying series with Sierra Leone that will now hold in November.

Meanwhile, match organisers, Eurodata Sport have clarified that no fan will be allowed inside the stadium for any of the two matches, in conformity with extant protocols on the coronavirus pandemic.

The Nigeria Football Federation (NFF) however called on television stations interested in bringing the matches live to the homes of Nigerians to immediately contact the Federation on the modalities to achieve this.