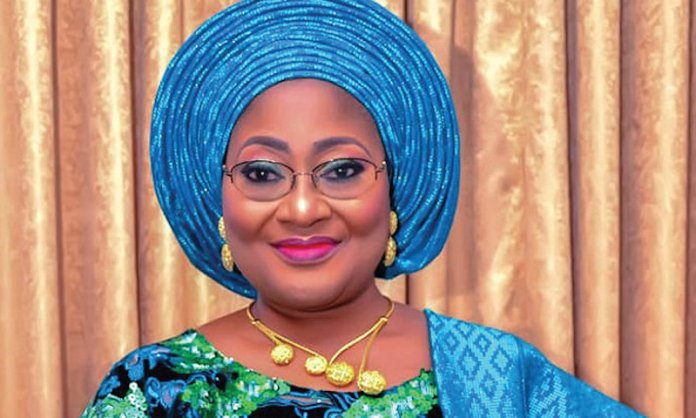 The wife of the governor of Osun State, Mrs. Kafayat Oyetola, has commended Olori Janet Afolabi, CNN award-winning journalist and Queen of Apomu kingdom for supporting Apomu market women with interest loans through Apomu Women Cooperative launched on October 2nd at the Palace hall in Apomu.

In her speech the first lady said “l appreciate Olori Afolabi for her efforts at ensuring the take-off of this project. I have no doubt that it would help to lift many women and homes out of poverty and enhance the standard of living in their homes.

“I call on other communities in the state which may not have this type of economic development mechanism to emulate Apomu women by floating their own cooperative bodies,” she explained.

The wife of the monarch said she initiated the project because “after COVID- 19 lockdown many women were unable to resume their trading businesses.

“Many of them had spent their capital. A lot of them tried to borrow money from families, friends and neighbours but it was very difficult .To help these women start again I came up with Apomu Women Cooperative as my flagship empowerment project to give interest-free loans to market women to be paid back over five months,” she said.

The women were randomly selected, shortlisted and interviewed by experts from LEAD Transformation Initiative.

The first batch of the beneficiaries was announced at the event.

In her response , the Osun first lady, who was the Guest of Honour said she was “delighted to have attended the unveiling of Apomu Women cooperative”.

According to her, the importance of women cooperative at this period cannot be over emphasised .

The event had over 500 women in attendance .

The Iyaloja of Apomuland, who is the market women leader said “this is the first time a project like this is launched in Apomu.

Apomu is the headquarters of Isokan Local Government Area of Osun State. It was one of the earliest towns that made up the old Oyo Empire. It was founded in the 16th Century.