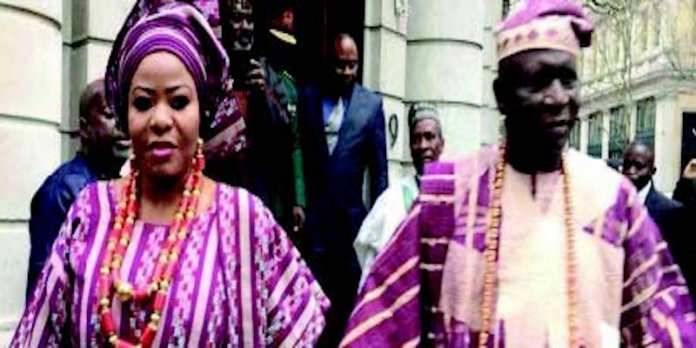 To any rational individual, a good reputation and a healthy dose of credibility are akin to undergarments. To sully these undergarments is tantamount to stripping and exposing one to the elements of deprecation and condemnation.
But, it is a thing with the world that the tallest trees always face the strongest winds. Thus, it is little surprise that Modupe Oguntade is the focus of vilifying schemes.

At the start of the second half of the year 2020, Nigeria’s High Commissioner to the United Kingdom, Justice George Adesola Oguntade, reportedly lost his ambassadorial position. This was the conclusion reached by many after President Muhammadu Buhari renewed the appointments of 12 non-career ambassadors, excluding Justice Oguntade and Justice Sylvanus Nsofor—who was the ambassador to the United States.

According to these sources, Modupe Oguntade was the chief culprit of her husband’s misfortune—the loss of an honorary position he has held since 2017. If the accusations levelled against Modupe Oguntade haven’t endeared her to the same level of scorn and contempt enjoyed by the Devil, they come really close.

Modupe’s detractors would have Nigerians believe that she turned over a new leaf when she accompanied her husband to the UK in 2017; that she took to pinching Nigeria’s purse and several other unmentionable tales were ascribed to Modupe Oguntade.

Recently, however, Nigerians resident in the UK opposed these allegations. These folks held that Modupe Oguntade was probably the biggest believer in Justice Oguntade’s appointment, and conducted herself by the same token. Furthermore, it was reported that Modupe Oguntade did employ the station of her husband, but for good work, charity, and looking after others; that she wasn’t—and isn’t—anything like the debauched, decadent and immoral lady as her detractors would have the Nigerians believe.

That there are particular individuals out to get Modupe Oguntade by tarnishing her image is obvious from the submission of Nigerians resident in the UK. But who are these antagonists and why are they after Modupe Oguntade?