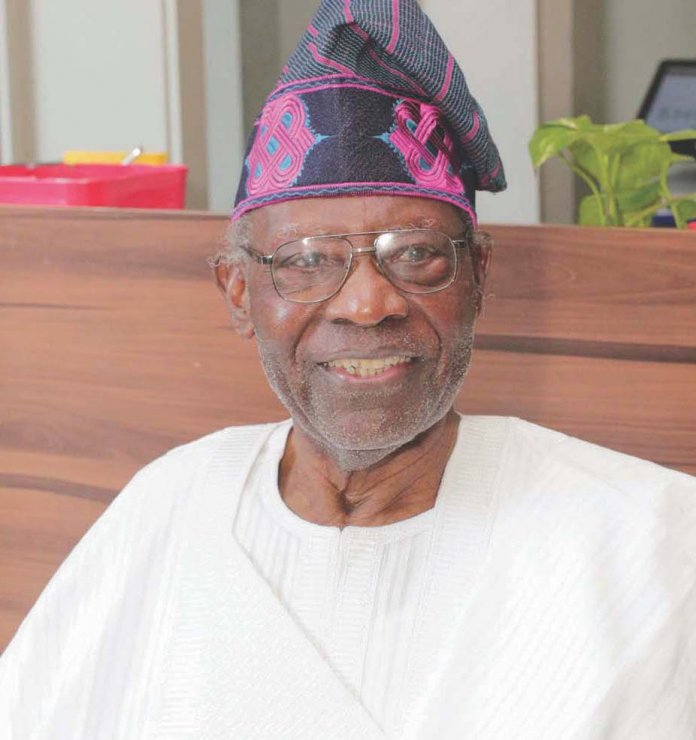 Since the passing of Professor Afolabi Ojo about a month ago (August 30, 2020) at the age of 90, the accolades have poured in from all corners, in celebration of the accomplished academician and administrator.

From President Muhammadu Buhari, who said the Professor of Geography “showed the world the reward of discipline, focus and dedication by climbing the academic ladder over many years and becoming a renowned author and administrator,” to Ekiti State Governor Kayode Fayemi, who said, “Prof Ojo’s exemplary life of service and distinction has inspired many to tow the path of excellence and honour,” it has been one glowing tribute after another.

A cursory glance at the Ado-Ekiti indigene’s milestones explains why he is being extolled by individuals from different walks of life, as well as organisations in the communities he touched, locally and nati

As an academic, Prof Ojo reached the zenith of his profession. In every step, He was precocious and exhibited excellence from an early age. At 13, he was already a pupil tutor. When he proceeded to the National University of Ireland, he finished with a First Class in Geography and Economics, the first African to do so.

Prof Ojo later obtained another First Class with his Master of Arts degree in 1957 and later a Ph.D in 1963, both from the same institution.

According to President of Ado-Ekiti Progressive Union , Ife Branch, Amos Makinde, Prof Ojo was the one who produced the policy paper which advised the first military governor of the former Western Region, Francis Adekunle Fajuyi (a fellow Ado-Ekiti indigene), to move the University of Ife from its Ibadan Campus to its present permanent site without delay.

By this time, Prof Ojo had already published two internationally acclaimed books: Yoruba Culture and Yoruba Palaces, were among the 140 books and academic articles he authored or co-authored.

As a foundation member of the University of Ife, he was Acting Head of Geography Department (1962). On October 1, 1970, he became a Professor of Geography. He was appointed Dean, Faculty of Social Sciences in 1972 and later, Dean, Faculty of Administration from 1976-77.

Prof Ojo was a product of open and distance education. In 1948, he passed the Senior Cambridge Examination and later obtained the Teacher’s Grade Two Certification in 1950, then the London Matriculation Examination in 1951, all as a private candidate. This spurred him to champion distance learning in Nigeria at tertiary level.

He was Chairman, Presidential Planning Committee on the Open University System in Nigeria (1980-81) and was then appointed as pioneer Vice Chancellor of the National Open University.

Much later, he was Chairman of the Provisional Governing Council of the Catholic University of Nigeria, Abuja (CUNA), from 2005 to 2008.

Prof Ojo didn’t only reach the zenith in his academic career. As a devout Christian, he got to the highest position a layman could in the Catholic Church.

He was the foundation National Secretary of the Catholic Laity Council of Nigeria (CLCN) from 1973 to 1981 and later became the National President from 1986-1994 and after, National Life Patron from 1995.

Prof Ojo was also a foundation member of the Pontifical Council for the Laity in the Vatican from 1983, a post he occupied for seven years. In recognition of his active participation in the Catholic Church, he was conferred with a Papal Knighthood of St. Gregory the Great in 1975.

Prof Ojo also actively imparted on the local communities in Ado-Ekiti where he’s from and Ife, which became his adopted home, as a result of spending decades at the university.

He held the traditional chieftaincy titles of Asiwaju of Ado-Ekiti, Balogun of Imesi-Ekiti and Otun Maye of Ile-Ife, in recognition of his impact on development in these environs. For many years, he was President of the Ado- Ekiti Progressive Union of which he later became a Life Patron.

On a national level, he was honoured as a Commander of the Order of the Niger (CON) in 2004.

Prof Ojo also excelled as a family man. Apart from his six children (split equally between male and female), he was father to a multitude; grandchildren, cousins, nephews, nieces and even many not directly related to him.

I was one of those to benefit from his accommodating nature, one of many who passed through the expansive compound in Ife, known as Otun Maye Square.

My granddad formed a large part of my earliest memories in life. These images always include a wide grin and a hearty laugh.

Living with him from when I was four till I went to university, most of my education was influenced by him.

What I associate granddad with the most is the written word; books of all shapes and sizes, journals, magazines, files… They were everywhere, but especially in his room.

The bookshelf that divided the room into a bed space and his study had a backlog of the diary he religiously kept for decades. There were books, files and pieces of paper – both hand and typewritten – on the reading table, the dressing table and the lounge chairs.

As a child, I learnt to be extra careful walking around the room so I didn’t knock over files and magazines lying on the floor. I also became acquainted with the sounds made by him furiously tapping a typewriter.

Granddad always slept in grandma’s room, even for an afternoon nap. Regardless of any other reason, it was the practical option. He couldn’t use his room because more books, journals and files were arranged on his bed.

As a school-age child, granddad’s room was the study where I was sometimes confined to get my homework done, or to revise for exams. Sometimes I got distracted, as I marvelled at how magnets could move office pins, paper clips and coins without contact. Or just sit staring at the large map hung on a wall, memorizing country names and capitals, the genesis of my dreams of travelling the world.

Despite the age difference of more than 50 years, Granddad and I always had engaging discussions. The magazines he subscribed to – and which I eagerly awaited my turn to read – were the subject of many discussions. TIME magazine, National Geographic and Reader’s Digest meant wide-ranging conversations that revolved around varied topics, from geo-politics to the solar system.

My granddad is responsible for me being a journalist. One of the ways he made sure I focused in church was for me to write an essay on the priest’s sermon. It served a dual purpose: making sure I concentrate, and also honing my writing skills.

On my 10th birthday, I remember getting an autographed copy of Richard Wright’s ‘Black Boy’ as my present. Along with it came the challenge that I was old enough to start reading “real books”, rather than Enid Blyton’s Famous Five and Secret Seven.

Fast-forward to about two decades later, and the exchange of reading materials continued. Granddad kept old editions of TIME for me, while I took current and past copies of THISDAY to him.

Granddad was a writer till his latter years. He wrote his autobiography, A Life of Surprises, in his eighties.

He didn’t just impart knowledge through his writing and lecturing, he also taught by example.

Apart from books, the other thing granddad was known for was his devotion to his faith. He was fervent and committed, and rose to the highest position a lay person could in the Catholic Church.

I marvelled at the fact that he used to give Holy Communion in church. I didn’t enjoy waking up early to drive him to morning Mass though. But I learnt lessons: discipline, dedication, sacrifice.

Granddad went for all the church services he could. This included both Christmas Eve and Christmas Day, Easter crossover service and Easter Sunday…

As a Papal Knight of St Gregory the Great, he proudly donned his costume and stood throughout Mass on the feast day of Christ the King, after a long Corpus Christi procession.

An enduring lesson Granddad made sure to impart was that of self-sufficiency and self-actualisation, without looking to anybody else. He made you feel you could achieve anything if you put your mind to it.

He was great at inspiring others and wanted them to achieve even more than he did. He was selfless and was never inclined to amassing wealth. He gave out his houses in Ife and Ado-Ekiti to the church. His exhortation was never to be a rich man, but a great man in future.

In all these, he never sought or encouraged short cuts. One of his favourite phrases was “As you make your bed, so you must lie on it.”

PROF OJO AT A GLANCE

Commander, Order of the Niger, Federal Republic of Nigeria (CON)