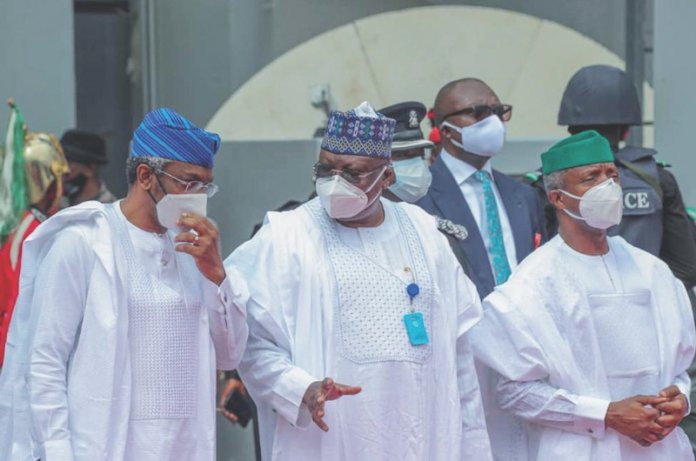 At 60 years, many of Nigeria’s challenges at nation building are still very much present, writes Tobi Soniyi

On Thursday, October 1st, 2020 Nigeria celebrated 60 years of independence from Britain. While some believed there wasn’t much to celebrate, others were upbeat, believing that the country has not done too badly.

But there’s a common denominator: all seemed to agree that the same challenges abound even though they disagreed on how to tackle them. One of such challenges is the reality that at 60, the Nigerian people are still debating whether to continue as a country or that the county should break into different nations.

This much was recently admitted by the Vice President, Prof. Yemi Osinbajo, (SAN), while speaking at a church service to commemorate the nation’s independence anniversary. He said: “Fortunately, for us, our walls are not yet broken. But there are obvious cracks that could lead to a break if not properly addressed.”

Before the vice president spoke, former president Olusegun Obasanjo, had last month declared that, “Nigeria is fast drifting to a failed and badly divided state. Economically, our country is becoming a basket case and poverty capital of the world, and socially, we are firming up as an unwholesome and insecure country.”

At 60, therefore, Nigeria faces an existential threat. Many factors are responsible for this, but a few of them are brought into focus to commemorate the nation’s 60th independence anniversary celebration.

Challenges in Diversity
Right from the beginning, it was obvious that the geographical area now known as Nigeria was not going to be easy to manage. Nigeria is home to over 250 ethnic groups, with over 500 languages, and a variety of customs, and traditions. Thus, bringing people of different cultures, religions and beliefs together was a great challenge.

This much was realised by the colonialists. They had to adopt different styles in administering the areas. This is because Nigeria’s diversity comes with its own challenges. Building a nation out of these heterogeneous communities would prove to be a tough job. Even though the British understood this dichotomy, they still thought it wise to bring people of different cultural backgrounds together.

A Leadership Deficit
During the struggles for independence, it became obvious that managing the nation’s diversity would not be easy. It wasn’t that the challenge posed by this diversity could not be managed. The problem, as it turned out, was getting leaders, who could manage it well.
It might be wrong therefore to blame a particular leader for the nation’s failures to get it right as some had attempted to do. Till date, every tribe continues to justify the roles played or not played by its leaders. Most countries that got it right at the early stage of their development have their leaders to thank. Nigeria’s leaders failed to agree among themselves on a developmental agenda. The result is what the people still contend with today.

Several Military Interregnums
Perhaps, if the civilians were left alone, they might have been able to resolve their differences. But greedy men in uniforms masquerading as saviours took over power and used it to further their own interest, entrench corruption and widen the fault lines among the people, who were still struggling to understand themselves.

Beginning from the first military coup d’état of January 15, 1966, to the November 17, 1993, when the Armed Forces, headed by Defence Minister, General Sani Abacha, forced Interim President, Chief Ernest Shonekan to resign, Nigeria had suffered irreparable damages from the aftermath.
Between 1966 and 1999, the army held power in Nigeria without interruption apart from a short-lived return to democracy between 1979 and 1983. Out of the four presidents the country has had since 1999, two were former military rulers. Since military rule is antithetical to the rule of law, building a nation, where citizens can realise their dreams has been very difficult.

Unending Scourge of Corruption
For many, this is one singular factor that has dealt the most devastating blow to the efforts to build Nigeria as a nation. While it is difficult to blame corruption alone for Nigeria’s failure, there is no denying the destructive impact of sleaze in building the Nigerian nation.
In 2012, Nigeria was estimated to have lost over $400 billion to corruption since independence. In 2018, the country ranked 144th in the 180 countries listed in Transparency International’s Corruption Index.

Oil Discovery and the Fate of Nigeria
Transparency International (TI) once claimed that the political consequences of oil-driven wealth in Nigeria, “has been an excessive centralisation of power, authoritarianism, a disregard for agriculture and manufacturing, the non-pursuit of internal taxation, and the development of pervasive patronage and rent-seeking cultures.” The summary says it all. In 2019, Corruption in Nigeria: patterns and trends a survey on corruption as experienced by the population jointly carried out by the United Nations Office on Drugs and Crime (UNODC) and the National Bureau of Statistics (NBS), estimated that some 117 million bribes are paid in Nigeria on a yearly basis, the equivalent of 1.1 bribes per adult. There are many statistics out there showing how much havoc that corruption has since wreaked on Nigeria.

Followers as a Problem
Every four years, politicians go round to ask for votes and the voters continue to elect those, who lack the capacity to make the difference only to turn around and blame the same leaders they elected. Many people above the voting age would not bother registering to vote. Those who registered would not come out to vote during elections. They will, however, take to the social media to deride the country.
Professor of political economy and management expert, Patrick Utomi, was right when he said: “The intellectuals have retreated and the middle class are becoming complicit.”
The Nigerian people will have to take their country back by performing their civic duty of voting and electing those who have the capacity to govern, into offices. They have to do more than grumbling on the social media.

Conclusion…
Addressing some of these challenges is not going to be easy. It will take a leadership with vision and a willing followership working together to tackle corruption to turn Nigeria around.
Fortunately, the military appeared to have settled for the barracks, though occasional intervention in some countries in the West Africa sub region gives cause for concern that nothing says democracy here is not reversible.
For now, enough of the blame game; let every Nigerian roll up his or her sleeve. There is work to be done.