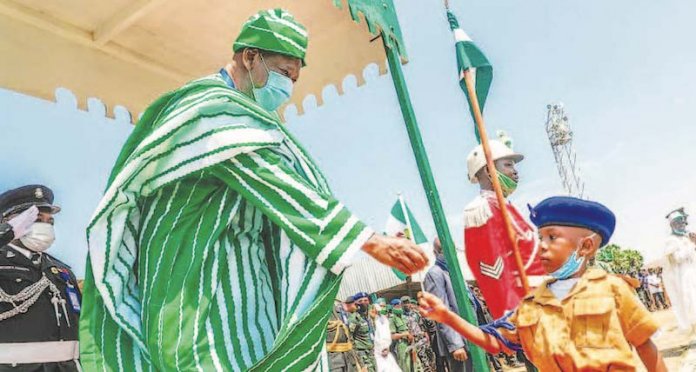 Recently, the ever-drowning opposition elements in Kano State have made a last-ditch attempt to cast aspersion against the administration of Dr. Abdullahi Umar Ganduje, with respect to the decision of the state government to resuscitate some non- or under-performing public assets through public private partnership arrangement with some willing investors that have shown their readiness and commitment to turn around such assets for the mutual benefits of the parties involved.

These non- or under-performing assets include Daula Hotel, Triumph Publishing Company Nigeria Limited rendered comatose by the Kwankwaso administration but revived by the present administration, Tiga Rock Castle Hotel and the abandoned structurally defective Shahuchi multi-floor car park awarded by the Kwankwaso administration during its second term between 2011 and 2015. This poorly executed car park project had to be demolished and in its place, a modern shopping complex is being constructed under a PPP arrangement with a private investor.

In their ever-futile attempts to rubbish the sterling achievements of the Ganduje administration, the dwindling opposition elements will clutch at every straw in order to show to the gullible that they are still relevant in the politics of the most populous state in the country despite the fact that most of the founding fathers and die-hard members of the sect have now seen reality and paid allegiance to Ganduje, having been convinced of his vision and mission to move the state forward in addition to his political acumen, foresight and dexterity.

These prominent politicians that have returned to APC include the former Deputy Governor, Prof. Hafiz Abubakar, the former Secretary to the State Government, Engr. Rabi’u Suleiman Bichi, the former APC National Treasurer, Alhaji Bala Muhammad Gwagwarwa, the former governorship candidate under the platform of PRP, Alhaji Salihu Sagir Takai and many others that have been attracted by the laudable achievements of Ganduje and his amiable disposition, humbleness and open-heartedness to carry all along.

As is their characteristic penchant for spreading rumours, these elements were in the air alleging that the Ganduje administration has started selling these public assets to private individuals or entities which is far from the truth. What really transpired is that some private investors recently made presentations during the State Executive Council meetings on their respective proposals to develop these properties so that they will be put into good use with immense benefits such as revenue generation, job creation, etc.

For example, Triumph Publishing Company Nigeria Ltd premises will be converted into a modern bureau de change market in order to bring the scattered operators of bureaus de change at Wapa, Fagge under one secured environment with modern facilities while Daula Hotel will be developed into a modern housing estate. In the case of Tiga Rock Castle Hotel, which is now completely unutilized and in a deplorable condition, the facility will be re-developed by a private investor to serve as a tourist destination and recreational/sporting arena.

Contrary to the rumours being peddled by the few remaining opposition elements, the state government has not yet given the go-ahead to the private investors to develop Triumph Publishing Company Nigeria Ltd, Daula Hotel and Tiga Rock Castle Hotel because the proposals have to be critically scrutinized and assessed by the relevant agencies before a decision is finally reached by the government because his Excellency, Gov. Ganduje has repeatedly stated his aversion to bequeathing poorly executed or abandoned project to the incoming administration in 2023.

What distinguishes the present administration from others is that Ganduje has a vision and mission to transform Kano into a modern mega city with state-of-the art amenities that can compete with its peers in the country. As a visionary leader, his main concern is to lay a solid foundation for the most populous state to become a paragon of development in the country in the foreseeable future as exemplified by his administration’s mission to develop the human resources of the state into an asset through the introduction of free and compulsory education policy at basic and secondary school levels and the provision of critical infrastructures in both rural and urban areas.

From the inception of the present administration on May 29, 2015, 204 new projects were initiated while 29 inherited projects were continued totaling 233 projects out of which 128 have been completed while the remaining 105 are at various levels of completion. In addition, the present administration has expressed determination to initiate additional projects like the construction of mega secondary schools and JAMB CBT centres in each of the 44 local government areas, a light rail transit system in the metropolis, among others. This is despite the dwindling revenue accruing into the state coppers and a huge monthly wage bill of about N10 billion but His Excellency is never daunted by these formidable financial challenges as he is fired by the desire to leave behind indelible legacies.
In the health sector, the Ganduje administration has come up with various policies and programmes toward ensuring a healthy citizenry that will provide the needed manpower necessary to catapult the state to the next level.

The administration has completed two gigantic hospital projects initiated by the Shekarau administration, embarked on the construction of a multi-billion Naira cancer centre which will be the first of its kind in the country, embarked on the construction of four mega hospitals at the four newly created emirates with a minimum of 400-bed capacity each, established the State Contributory Health Care Management Board and the Health Care Trust Fund, converted Muhammad Abdullahi Wase Specialist Hospital into a teaching hospital, among other laudable undertakings and initiatives which have attracted commendations from critical stakeholders from within and outside the country. Even the successes the state has recorded in the fight against polio and the current Covid-19 pandemic is attributable to the commitment and political will demonstrated by Ganduje.

So, it is abundantly clear that the Ganduje administration is far ahead of its immediate past predecessor in terms of vision, mission and realization of set objectives as it always weighs the pros and cons of any policy or programme before implementation as in the case of the above-mentioned non- or under-performing assets belonging to the state. There is no doubt that leaving these assets as they are now will not be beneficial to the state and any impartial and discerning mind will attest to this fact. Before the envisaged turn-around of these assets is executed, the state government will have to be convinced about the viability of the projects, the financial strength, experience and expertise of the private investors and the ultimate positive end results of the undertakings to the state to ensure value for money.
––Salihu Tanko Yakasai is the Special Adviser to the Governor of Kano State on Media.