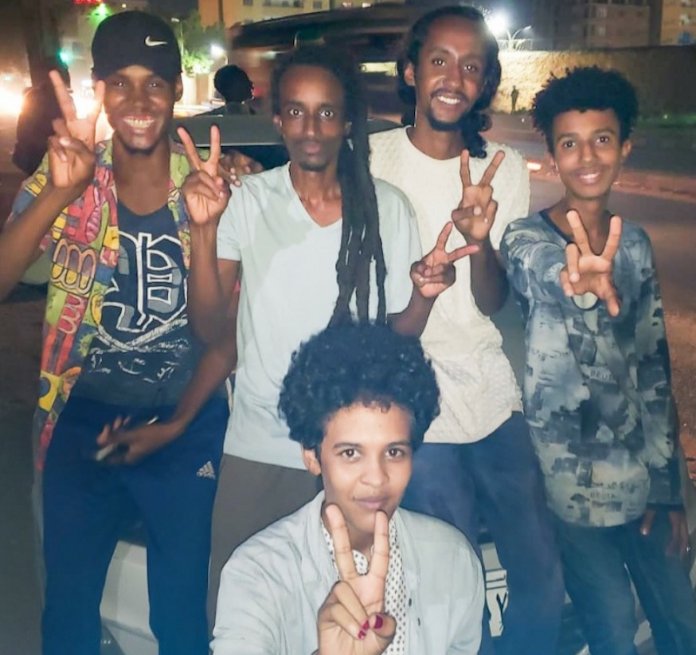 The Sudanese Filmmaker Hajooj Kuka who was imprisoned alongside four other artists in the North East African country has regained freedom. South African film producer Steven Markovitz shared the news on his Twitter with a photo of the artists making the peace sign on a street.

“Great news!! @hajooj and the four artists have just been released. International pressure made a difference,” he wrote on Twitter.

Kuka, a member of the Academy of Motion Pictures Arts and Sciences ― the body responsible for the Oscars ― was sentenced to two months imprisonment and fined 5,000 Sudanese pounds ($90) last week for ‘threatening peace’ and ‘breaching public safety. He was arrested alongside four other artists: Abdelrahman Mohamed, Ayman Khalafallah, Ahmed El Sadig and Duaa Tarig.

Kuka had on August 13 tweeted about an attack on him by Islamists instigators during a workshop in Khartoum.

“The police stood by the attackers and arrested us. Now we are awaiting trial. Is there any support for #artists or do we need to get killed first?”

Local reports disclosed that Sudanese authorities raided a cultural centre in the Al-Zuhour neighbourhood of the capital Khartoum, where several artists were rehearsing a play, after receiving a noise complaint from residents.

Tarig alleged that she was slapped by a police officer for protesting that her picture shouldn’t be taken by him.

While in custody, the detainees chanted revolutionary slogans, which angered police authorities and delayed their release.

On September 17, Kuka tweeted that he was sentenced to two month jail. That announcement triggered a wave of protests from the global film and art industry. The #freehajooj movement was birthed and the hashtag #ArtIsNotACrime reverberated around the world as filmmakers and artists called for their release.

Prolific Nigerian filmmaker and Academy Director of the MultiChoice Talent Factory, West Africa, Femi Odugbemi, was among the voices that called for his release. He condemned the act, saying that “Artists are at the vanguard of positive change in Sudan, and played a critical role in Sudan’s revolution. When they are not protected, no one is protected.”

But there are six other artists who are yet to be released according to Markovitz.

“There are still six artists in jail pending appeal and many more people who have been arbitrarily detained in Sudan.”