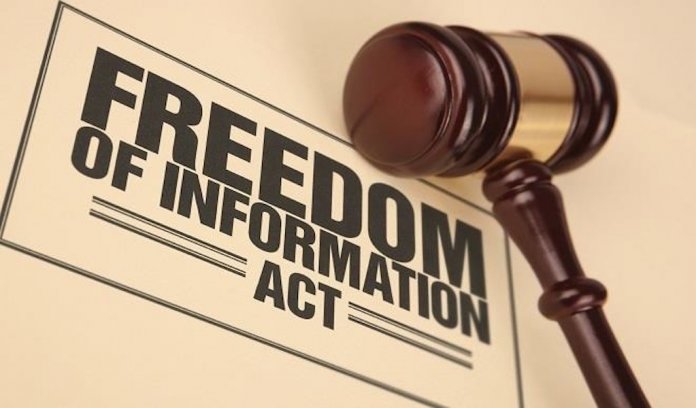 The Senate, House of Representatives, the Nigeria Television Authority (NTA), Nigerian Football Federation (NFF), Office of the National Security Adviser, as well as the Petroleum Products Pricing Regulatory Commission (PPPRA) have emerged as the Freedom of Information (FOI) least compliant and transparent public institution for the year 2020.

This comes as the Public Service Reforms (BPSR), Nigerian Investment Promotion Commission (NIPC) and the Nigeria Export Promotion Council (NEPC) have emerged as the FOI most compliant and transparent public institution for the same year.

Of the 211 public institutions covering the Executive, the Legislature and the Judiciary that were assessed and ranked, the BPSR was adjudged the winner with a total of 58.7 points, while NIPC came second with 54 points and NEPC came third with 43.5 points.

The Senate and NTA ranked 155 with six points each, while the NFF, Office of the National Security Adviser (ONSA) and PPPRA ranked 200th with zero points.

The event held on Monday in Abuja was organised by BudgIT, Basic Rights Watch (BRW), the International Centre for Investigative Reporting (ICIR), Right to Know (R2K) Nigeria, Media Rights Agenda (MRA) and the Public and Private Development Centre (PPDC) to rank public institutions based on their level of disclosure, transparency, and compliance with the Freedom of Information Act, 2011.

The ranking methodology assessed public institutions for their compliance with their proactive disclosure obligations under the Act; their level of responsiveness to requests for information in terms of timeliness; the level of disclosure in terms of the completeness of the information provided to requesters; whether they conducted FOI training for their staff as mandatorily required by the Act; whether they had designated their FOI Desk Officers as required by the Act; and their level of compliance with their FOI annual reporting obligation for the year under review.

The Coordinator of R2K, Mrs. Ene Nwankpa, while speaking at the event which coincided with the International Day for Universal Access to Information proclaimed by the United Nations General Assembly in 2019, lamented that the level of compliance by public institutions with their proactive obligations under the FOI Act remained extremely disturbing.

Nwankpa explained that the aim of the ranking was to entrench accountability and transparency in public and security sector institutions by ensuring that ministries, departments and agencies (MDAs) of government liberate data and that citizens have timely and unrestricted access to public information.

She stated: “Improved disclosure practices by MDAs will positively impact how public resources are managed and utilized which will in turn reflect positively on the government as citizens would have the necessary information which would allow them to actively participate in governance.”

Nwankpa described FOI Act compliance as a veritable tool for proper information management, creating an enlightened citizenry and building public trust in government, particularly in the face of a global pandemic.

Also, the Chairman, House Committee on FOI, Hon. Cornelius Nnaji, lamented that the National Assembly has discovered that most government institutions are not aware of the FOI Act even after nine years of its enactment, adding that there was need for intensive and impactful broad-based publicity by key stakeholders on the existence and the act using mass media.

He said that the full implementation of the FOI Act, among other things, would serve as an economic development indicator to the extent that citizens on their own can monitor budget implementations with a view to ascertaining monies approved, released and utilized for each capital project vis-a-vis work done on site.

The chairman noted that citizens located at different federal constituencies can, with a click of the cursor, monitor the implementation of constituency projects domiciled in their areas with the resultant effect of nipping in the bud the unfortunate rumours being peddled about that members of the National Assembly are misappropriating constituency funds not minding the fact that it is the executive that implements project.

Nnaji said: “I make hold to say that by so doing, issues of rumour mongering, hate speeches and fake news that has characterized various government would have been reduced to the barest minimum if not completely eradicated.”

On his part, the Chief Executive Officer of Basic Right Watch, Mr. Austin Ekwujuru, said that the annual FOI ranking not only recognises public institutions that are transparent, but also promotes the effective implementation of the FOI Act in order to help fight corruption, which is a core pillar of President Muhammadu Buhari’s administration.

He noted that timely and unrestricted access to information by members of the public was critical to the success of the fight against corruption at all levels of governance, adding that corruption can only thrive in an environment of secrecy.