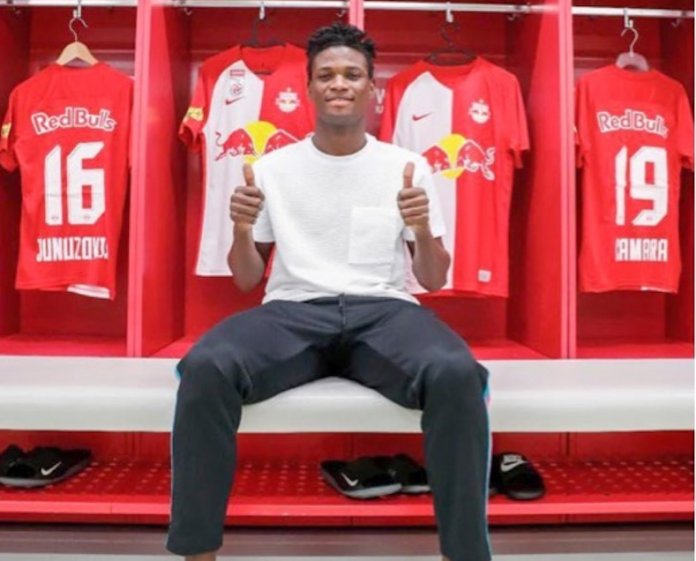 When he led the Nigeria U17 Cup of Nations in Tanzania and the 2019 FIFA World Cup in Brazil, little did the 18-year old know that his path to higher glory was just around the corner? It was therefore a big surprise to Samson Tijani when his name was included in the 25-man list for the two-headed friendly games against Algeria and Tunisia by Manager Gernot Rohr. Perhaps, not until after the end of the two matches would the Red Bull Salzburg of Austria loanee come out of his dreamland

When Franco-German Nigeria senior national team Manager, Gernot Rohr rolled out the 25-man Super Eagles list that would procure next month’s double-header friendlies against the Desert Foxes of Algeria and the Cartage Eagles of Tunisia, billed for October 9 and 13 respectively in Austria, little did he know someone in the list was in for a shock treatment.
Red Bull Salzburg loanee, Samson Tijani, has confessed that his maiden invitation to the Super Eagles for their upcoming friendlies against Algeria and Tunisia came as a surprise, and has claimed that he did not have any contact with manager Rohr and his assistants in the days leading up to the squad announcement.

However, the former Golden Eaglets skipper has revealed that the Franco-German football tactician assured him and other Nigeria U17 stars last year that there was a pathway into the Super Eagles if they keep doing well.
Tijani has therefore jumped two age groups – Flying Eagles and Olympic Eagles following his first call-up to the Super Eagles and after only four matches as a professional and 322 minutes under his belt.

“I feel good about being invited but I didn’t expect the call-up because I just moved to Europe,” Tijani told allnigeriasoccer.com.
“It was amazing when I came to Europe, I didn’t even play in the academy, went directly to the first team.
“When I was sent on loan, I went straight to the starting lineup, I have played all the games. It is amazing starting all the four matches, thank God for everything”.

The former TSV Hartberg defensive midfielder added: “Everything is step by step, when I get to camp things will be good, I did not even know the coach was going to invite me.
“Rohr came to the camp when we were preparing for the Africa U17 Cup of Nations, he watched me and the other players, said I’m doing good but I’m still a kid and he’ll be monitoring the good players.”
Tijani immediately called his mother as soon as his invitation to the Super Eagles was confirmed by the Nigeria Football Federation.

“I called my mother first to inform her of the good news about my call-up but she didn’t understand the meaning so I had to break it down for her. She was happy and thanked God for everything,” concluded Tijani.
The 18-year-old Tijani is battling more experienced players such as Oghenekaro Etebo, Mikel Agu and Frank Onyeka for one of the starting spots in central midfield in the friendlies with Algeria and Tunisia next month.

Aware of the crucial role Ndidi plays, Boboye – who is currently the head coach of Nigeria Professional Football League outfit Awka United – suggested new invitee Tijani as a potential candidate to play in his absence amid experience concerns.
“Ndidi should be the only player actually playing that position in the national team. If he is injured, I think we should have a better replacement. The coaches working with them know,” Boboye told Goal.

“That position is where Oghenekaro Etebo has been played in more than three games for Nigeria so he can fill the void as usual.
“We have Samson Tijani, the Golden Eaglets captain who is playing regularly for his club in Europe and he is a better replacement if Ndidi is not there, though he might lack the experience. The advantage is that he’s playing at his club and they can give him a guideline.”

Tijani captained Nigeria to the U17 Fifa World Cup in Brazil last year, and he is currently on a season-long loan at Austrian top-flight club Hartberg from RB Salzburg.
The 18-year-old midfielder has played four matches across all competitions this season, which include two Austrian Bundesliga games.
Unfortunately, Tijani was sent off on Sunday after receiving two yellow cards in Hartberg’s 2-0 defeat to Wolfsberger AC.

Nigeria face Algeria on October 9 before tackling Tunisia four days later in Austria, however, Boboye feels the games are there to help the team bond after almost a year without international outings.
“These are friendly games, just to see how we can combine the teams and get good performances in the two matches.

“They are not must-win games, we don’t have anything at stake in those games but to see other players and see how they can blend into the Super Eagles,” Boboye said.
In the same vien, former U17 World Cup winning coach, Manu Garba has described the inclusion of Tijani Samson into the squad of the Super Eagles is a good omen for the younger generation of Nigerian footballers.

Garba, who discovered Tijani and tutored him at the Junior African Nations Championship in Tanzania and also the World Cup in Brazil said the players’ inclusion is another benefit of hard work and dedication.
”For Tijani, his inclusion into the team is a good omen for younger players coming up”. Garba told brila.net.

“I believe he can show what he has on the ball when he gets the chance to kick the ball for the senior national team,” he said.
The Nigerian teenager began his European campaign at the Red Bull Arena after signing a long-term deal with Jesse Marsch’s side on a five-year contract.

Tijani joins Die Mozartstadter from Lagos-based outfit Collins Edwin Sports Club.
“I am so grateful to sign for Red Bull Salzburg. I hope the fans will support us and be with us in this journey, which will not be easy,” Tijani had said.
How well Tijani can cash-in on this rear opportunity if fielded in any of the two games remain to be seen.