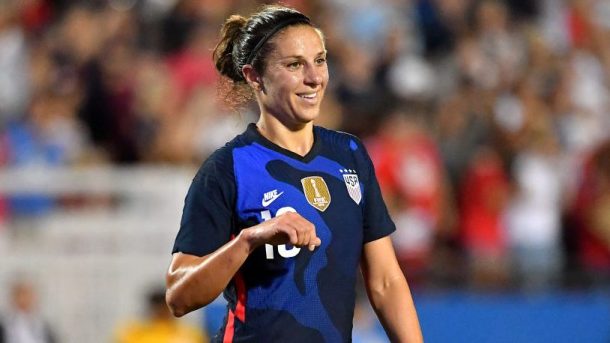 Lloyd, who helped the US to win gold at the Beijing 2008 and London 2012 Games, has also won two World Cup titles and scored 123 goals in 294 appearances.

The 38-year-old said: “My goal is another Olympic gold medal. Hopefully that dream can come true and then I’ll probably get a taste of retirement”.

The Olympics have been delayed until 2021 because of the Covid-19 crisis.

Lloyd, who plays for Sky Blue FC in the US, spent a a short time on loan at Manchester City in 2017 and scored in their FA Women’s Cup final victory over Birmingham.

She says she wants to start a family with her husband Brian Hollins, who is a professional golfer, and continue to lead football clinics with young players once she retires.

“That’s the plan – to stay involved in the game,” Lloyd said on the My Sporting Mind podcast.

“I’ve been fortunate enough to accomplish a lot but I still have that final chapter to write.

“I know that when the time comes to walk away from the sport I will hold my head high and I’ll know in my heart that I left it all out there.”