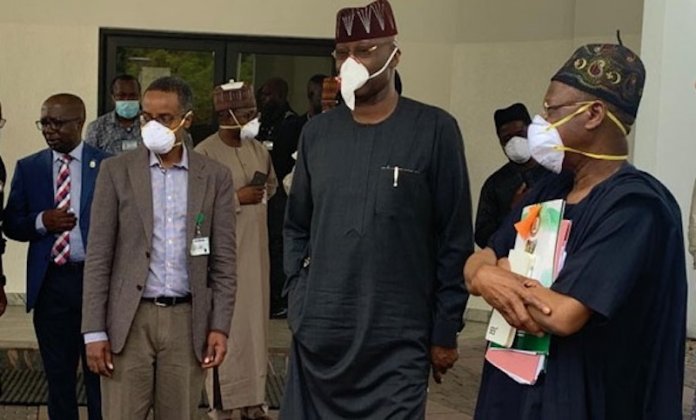 The meeting between the federal government and organised labour, Nigeria Labour Congress (NLC) and Trade Union Congress (TUC), was adjourned yesterday till Monday after both sides failed to agree on terms for the resolution of the dispute over the increase in petrol price and electricity tariffs in the country.

However, the planned industrial action scheduled for Monday by the labour unions is put in abeyance, pending further consultations with their various organs during the weekend on the offers made by the federal government to cushion the effects of the price hikes on workers.

The Secretary to the Government of the Federation (SGF), Mr. Boss Mustapha, who led the government team, also yesterday informed the unions that President Muhammadu Buhari had asked him to reassure the labour leaders and Nigerians that the government’s decisions on petrol price and electricity tariffs were never intended to cause any pain or harm.

In the meantime, the National Industrial Court has granted an interim injunction restraining the NLC and TUC, their officers, affiliates and privies from embarking on any strike or stoppage of work from Monday, September, 28 2020.

But in a swift reaction, the TUC described the court injunction as a “non-issue.”
The Minister of Labour and Employment, Senator Chris Ngige, who briefed journalists on the outcome of the meeting last night, said the meeting was fruitful as it afforded the federal government the opportunity to present some of the palliatives federal government intends to implement to cushion the effects of the petrol price increase and the upward review of electricity tariffs.

Ngige said: “Fruitful meeting. They are going back to their organs. When they consult their organs tomorrow, next tomorrow may be they will take a new decision.
“We have requested them to shelve the strike. We have appealed to them to shelve the strike.
“The government side agreed proposals with them on the palliative to cushion the effect of the rise in petroleum products and electricity.”

THISDAY gathered from sources that the government side had offered palliatives, including mass and affordable housing for workers, and procurement of transport buses to help reduce the impact of rise in fuel price.
The federal government was also said to have proposed that the Central Bank (CBN) and Ministry of Agriculture will help farmers with loans, including N2.5 billion as fresh palliatives to workers on levels 1-4.
They also agreed that the government will not tax minimum wage.

Meanwhile, the NIC has granted an interim injunction restraining the NLC and TUC, their officers, affiliates and privies from embarking on any strike or stoppage of work from Monday September, 28 2020.
Justice Ibrahim Galadima said the order was pending the hearing and determination of the motion on notice.

The court also granted an order of interim injunction restraining the unions, their officers, affiliates, privies from disrupting, restraining, picketing or preventing the workers or its affiliates or ordinary Nigerians from accessing their offices to carry out their legitimate duties on September 28, 2020 or any other date.
Justice Galadima made the order sequel to an ex-parte application filed by the Incorporated Trustees of Peace and Unity Ambassadors Association through their counsel, Mr. Sunusi Musa.

The court also granted an order compelling the Inspector General of Police and the Director General Department of State Services (DSS) to provide protection for workers engaged in their legitimate duties from any form of harassment, intimidation and bullying by the officers, agents or privies of the unions pending the hearing and determination of the motion on notice.

The meeting with labour commenced in a rather confrontational note as Ngige and the President of the TUC, Mr. Quadri Olaleye, exchanged hot words.
Ngige had complained that TUC did not write the Ministry of Labour and Employment to notify it of its strike deadline but rather chose to submit it to the president.

He said that as far as he was concerned TUC has nothing on the table except that NLC had said that they would partner them in their planned mass action on Monday.
Ngige said the only competent authority of every country regarding labour disputes is the Minister of Labour.

However, TUC president said he did not see anything wrong in what TUC did because the issues on hand were more of socio-economic issues that the president has responsibility to address.
Olaleye had demanded that Ngige should withdraw his statement that TUC had nothing for resolution unless he didn’t want them to be part of the meeting.

Wabba, however, said labour movement is always ready for dialogue on any issue affecting workers.
He said labour leaders are about the most patriotic group in the country.
He said labour is ready to see the amicable and final resolution of subsidy issues in the petroleum sector.

Deregulation Not Intended to Cause Harm, Says SGF

Explaining the government’s subsidy removal policy, the SGF informed the unions that the president had asked him to reassure the labour leaders and Nigerians that the government’s decisions on petrol price and electricity tariffs were never intended to cause any pain or harm.
Shortly before the commencement of yesterday’s negotiations, Mustapha told the labour leaders that Buhari said that the policy of deregulation and liberalisation of the energy sector had become an imperative decision that the federal government must take.

Mustapha said: “The president has said that no government decision is intended to cause any pain or harm. Decisions that have taken are of utmost interest to all people and the working class.”
The SGF went down memory lane, recollecting the decisions contained in the report of the Presidential Transition Committee led by Alhaji Ahmed Joda, which was set up by Buhari in 2015, saying deregulation of the petroleum sector was a major part of it.

He, however, said the president refused to accept that part of the recommendations, insisting that the Nigerian people didn’t elect him to inflict pain on them.

“When the report was submitted to Buhari, his reaction was that the Nigerian people elected him not to inflict pain on them. He said though he considers that economically as a low hanging fruit, he felt that the time was not yet ripe for it. That the important thing is to manage before such decision will ever be taken.
“Five years down the line, that decision has become imperative and cannot be escaped, it is a decision that must have been painfully considered,” he said.