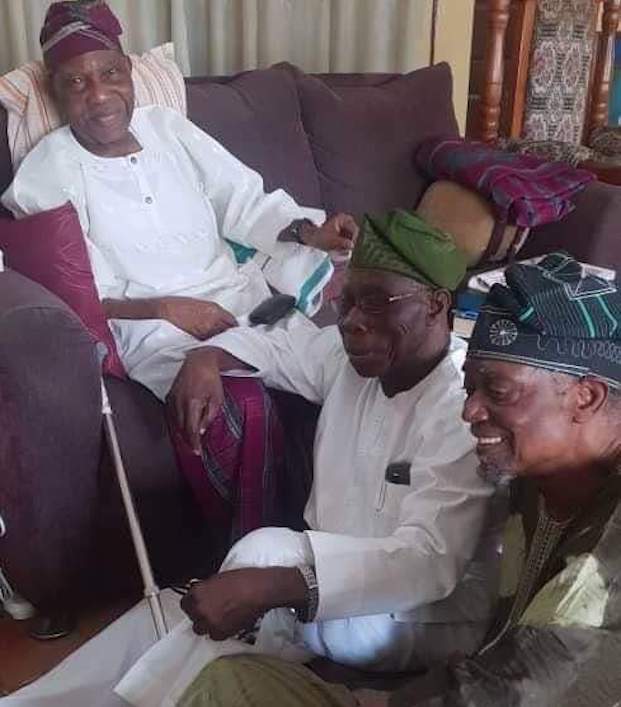 Obasanjo spoke in Akure, Ondo State capital at the launch of a book, authored by the leader of the Pan Yoruba Socio-Politucal Group, Afenifere, Chief Reuben Fasoranti titled ‘ My Life, My Legacy’.

The remark of Obasanjo, who was the chairman at the book launch, was sequel to the worries expressed by the nonagerean that this was not the Nigerian of his dream.

At the book launch, many people from all walks of life, paid glowing tributes to the elder statesman who clocked 94 on Friday.

The former president described Fasoranti, as a special gift to the Yorubaland and Nigeria as a whole .

Obasanjo said Pa Fasoranti had been expressing fear of how Nigeria would be when he (Fasoranti) passed on but the former President allayed the fear of the Afenifere leader, saying Nigeria would be better before Fasoranti left the world.

Governor Akeredolu, in his remarks, described Fasoranti as an icon of the nation who used most part of his life moulding the young ones.

” Many of your students are proud of you because you made impact on their lives. You are our pride in Ondo State . You are not only the pride of Akure town but Ondo in general. Before you go this country will be good,” Akeredolu said .

While welcoming the guests at the event held at the Ondo State International Event Centre, The Dome, Pa Fasoranti, expressed his delight on the quality of guests in attendance.

Fasoranti told geusts, that he wished for a public digital library to articulate and archive critical events of Nigeria’s history; pre-colonial, colonial, and post-colonial, to be established in his life time. He called on all stakeholders to ensure the project was completed before his departure.

He said, “Time is no longer my friend, though, but with you, great and understanding people, time can still be bought to get the project accomplished before my time is finally out. I now respectfully welcome and invite you to make the project a reality. I wish you save journey back at the end of the exercise.

“In my life adventures, l have tried to see what I could leave behind for humanity. To this extent, I have tried to invest in human beings. I have served the people at both local, state and national levels and shown the way to selfless services I have experimented with western education to set examples I have also made some input into human capacity building. Of late, however it occurred to me that I must have a project as a centre to harness and concretise all these; something unique, more lasting, modest, noble and useful in lifting up humanity.”

Fasoranti, a former Commissioner for Finance, in Ondo State , who said the book launched, was his autobiography, also lamented the bad situation of the country, saying ” this is not the Nigeria of my, nay our, dream.”

The Chairman of the Governors’ Forum and Ekiti State Governor, Dr Kayode Fayemi, who was also one of the students of the celebrant, expressed assurance that the project would be completed as he said all the governors of the South West would pool resources to carry out the project, to honour the nonagenarian Afenifere leader.