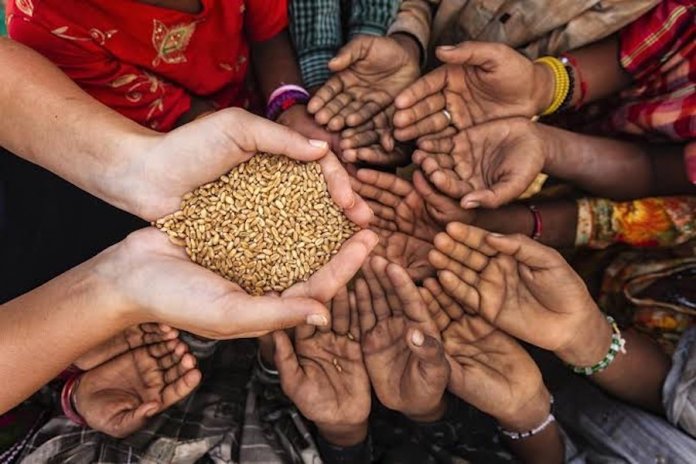 The world is run by numbers. With numbers, we measure, rank and position. In many parts of the world, numbers decide elections, determine the distribution of economic resources and serve as a yardstick for measuring progress. Understanding numbers, therefore, is an important way to appreciate issues.

Today, there is a number for nearly everything. The most impressive ones are those that show trends.

The World Bank is big on numbers. The numbers from its research influence policies in countless countries and organisations. It estimates that almost 10 per cent of the world’s population, or 734 million people, are poor. That is, about 734 million people in the world live on less than $1.90 per day. The sad part is that a full half of the total number of poor people in the world live in just five countries.

Nigeria is one of those five countries. There are more than 82 million poor people in Nigeria, according to the National Bureau of Statistics (NBS).

Numbers paint a picture. This is true. It is, however, not always a pretty picture. Numbers also tell stories. But it is not always the whole story. As Ron DeLegge II noted in Gents with No Cents, “99 per cent of all statistics only tell 49 per cent of the story.”

Take the number 800 million. This number can mean anything or mean nothing. But for the Food and Agriculture Organization (FAO) of the United Nations, it is the number of people worldwide who are hungry and suffer from nutrient deficiencies. The FAO also estimates that approximately one billion people have inadequate protein intake.

The Nigeria Protein Deficiency Report supports this assertion. The report indicates that the protein intake of Nigerians is generally quite insufficient.

Sometimes, numbers are not just figures. They are people. They are a catalogue of the world’s most persistence problems. Problems that must be resolved to improve life for all.

Experts insist that the world is also going to be saved by numbers. If this is true, then 17 must be the figure. The reason is not far-fetched – 17 represents the number of Sustainable Development Goals (SDGs).

The SDGs are a collection of 17 global goals designed as a “blueprint to achieve a better and more sustainable future for all”. Set in 2015 by the United Nations General Assembly, the SDGs are intended to be achieved by the year 2030.

The goals are meant to address the global challenges, including those related to poverty, nutrition, inequality, climate change, environmental degradation, peace and justice. The 17 Goals are all interconnected, and, to leave no one behind, they all must be achieved. The period 2020 to 2030 has therefore been declared as the Decade of Action.

To achieve zero hunger calls for genuine commitment. It requires a number of stakeholders, across the public and private sectors, to find a reason to work together for the common good. While progress had been made in this space, the coronavirus pandemic has greatly heightened the challenges, especially for the most vulnerable.

The pandemic is just one of many challenges. The population growth rate is another. The world population is today put at 7.8 billion but it is projected to reach 8.6 billion in 2030, 9.8 billion in 2050 and 11.2 billion in 2100, according to a United Nations report.

The global population growth compounds the challenge of curtailing hunger and malnutrition. It dictates that efforts be intensified to achieve zero hunger.

Experts rightly point out that the impact of hunger is far-reaching. Hunger produces malnutrition, stunted growth, wasting, babies born prematurely, low birth weights, and in severe cases, infant and child mortalities. And this is only on the physical side.

Hunger also causes the economy to suffer. The cost of illness and attendant healthcare; the value of poor educational outcomes and subsequent lower lifetime earnings linked to hunger; and the price of reduced labour productivity precipitated by absenteeism are huge and incalculable.

Whatever these numbers are, they represent waste, avoidable waste. To end this waste, the quest to achieve zero hunger must be pursued relentlessly.

Of course, the problem is not just the numbers. It is what they represent. So, beyond the numbers, action is required.

Now, when it comes to flipping the numbers, the government has an important role to play. In many ways, it must take the lead. To start with, it must take another look at its policies. It must seek to actively implement policies that truly empower citizens, by boosting the capacity to earn, so that people can live meaningful and productive lives.

To reduce the number of hungry people in Nigeria, and indeed across the world, citizen empowerment is key. As the Nigeria Protein Deficiency Report revealed affordability and availability are the key factors in food choice among Nigerians. The report, which shed light on food consumption patterns among Nigerians, fingers high cost as a major disincentive for the consumption of most nutrient-rich protein food in the country.

Next, there has to be a deliberate, conscious intensive nationwide campaign to create awareness about the need to improve access to nutritious food. This would involve orientation on the advantages of eating right, with nutrient-rich foods held up as essential for a healthier life.

Protein Challenge, a protein-pull media campaign supported by the United States Soybean Export Council (USSEC) and other partners, is working in that space to create awareness about the prevalence, status and impact of protein deficiency in Nigeria. Action Against Hunger and the Global Alliance for Improved Nutrition (GAIN) and other similar organisations are also here represented.

Eliminating hunger in Nigeria would mean successfully flipping the numbers. It will signify a huge step towards improved living condition for the citizens.

To achieve the SDG 2, we must look beyond the numbers.