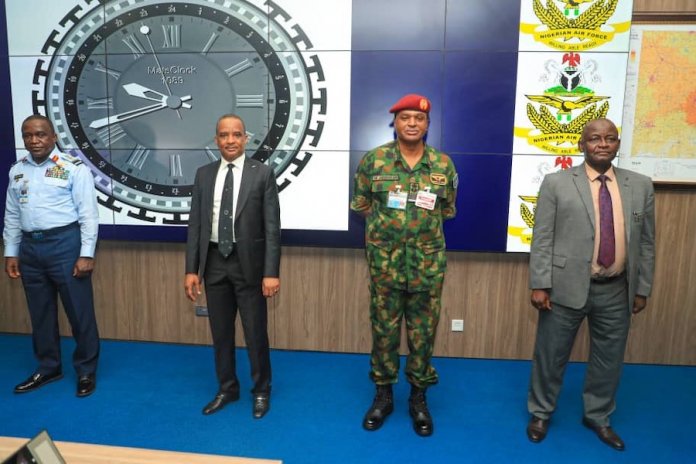 To support the Nigerian Maritime Administration and Safety Agency’s Deep Blue Project, a security structure designed to secure all anchorage areas in the nation’s maritime domain, the Nigerian Air Force is set to deploy its air assets and special forces. Chiemelie Ezeobi writes

World over, security threats keep evolving from traditional to conventional warfare. In the maritime domain, the same rings true. In the past, the maritime domain was threatened by piracy, sea robbery, illicit trafficking, narcotics and arms smuggling, illegal, unreported and unregulated fishing (IUUF) and marine pollution.

Now, emerging security threats within the Nigerian maritime domain stem largely from non-military causes such as socio-economic agitations and unemployed youths within the coastal communities, which are manifested through attacks on shipping, sabotage of hydrocarbon infrastructure and maritime resource theft.

Given that the Gulf of Guinea (GoG) is also the primary conduit of international trade and is central to the economy of the associated regions, it is increasingly looked upon today as resource provider and critical contributor to national growth and prosperity of the several nations lining its coasts and even those landward and with no shared boundaries.

It was in its constant bid to find lasting solutions to the myriad challenges bedeviling the nation’s maritime domain and even the GoG, that the Nigerian Maritime Administration and Safety Agency (NIMASA), partnered the Nigerian Navy (NN) and the Nigerian Air Force (NAF), both to give covering at sea and air power, respectively.

Known as the Integrated National Security and Waterways Protection Infrastructure or the Deep Blue Project, the security structure which is championed by NIMASA, is designed to comprehensively secure all anchorage areas in the Nigerian maritime domain.

Lauded by stakeholders, the Deep Blue Project will see the federal government take total control of the country’s maritime security, which includes anchorage, where all vessels calling at the various ports across the country berth. The project is expected to take off October 2020.

According to NIMASA Director-General, Dr. Bashir Jamoh, the Secure Anchorage Area, which has been a subject of contention, would now be covered under the Deep Blue Project, a multi-spectrum security architecture.

Stressing that there is absolutely no need for the nation to have private security in its maritime space, he said it only increases the cost of shipping in the country.

Firmly supported by the Nigerian Ports Authority (NPA), its Managing Director of the NPA, Hadiza Bala-Usman, reiterated that the move would certainly reduce the cost of shipping of goods into the country and give the security of the nation’s maritime domain focal attention.

With the Deep Blue Project, it is expected that the maritime space and Exclusive Economic Zone, up to the Gulf of Guinea, will be a whole lot safer. As has been disclosed by both NIMASA and NPA, it would be easier to interlink the C3i technology of the NPA, the C4i of NIMASA and the Falcon Eye of the navy, thus leading to an interchange of information that would speed up the Nigerian Navy’s response to threats at sea.

As part of its partnership with NIMASA, the Nigerian Air Force (NAF) recently indicated interest in deploying its air assets and special forces for the take off of the Deep Blue Project.

According to the Chief of the Air Staff (CAS), Air Marshal Sadique Abubakar, who recently played host to the DG of NIMASA, Dr Bashir Yusuf Jamoh, at the Headquarters NAF Abuja, the air force has maintained a long standing, cordial relationship with NIMASA, with an MOU on Maritime Air Surveillance and Intelligence signed in 2013.

He said further that, despite the fact that the MOU had elapsed, the NAF had continued to play crucial roles, working very closely with the Nigerian Navy, using the NAF ATR 42 Maritime Patrol Aircraft (MPA), which had participated in several exercises within Nigeria’s maritime environment.

He noted that the DG’s visit was auspicious and would mark a new era in moving NAF’s partnership with NIMASA to a much higher level.

Also, as a booster to secure the coastal areas, CAS said the Unmanned Aerial Vehicles (UAVs) that would be deployed to the newly established Combat Reconnaissance Group (203 CRG) in Gombe State (to primarily deal with the security challenges in the North-east and other parts of the North), could be moved to any coastal locations, especially given the crucial importance of the maritime environment to the survival of the nation.

He added, “indeed, we are working towards establishing UAV Wings in Lagos, Calabar and Port Harcourt, to support the efforts of other security agencies in maintaining the security of the maritime environment”.

The CAS assured the DG that the NAF would do everything possible to partner NIMASA on the Deep Blue Project, as the federal government is doing everything humanly possible to secure Nigeria and Nigerians, adding that highly professional and properly trained officers, pilots and technicians had been selected for additional training to add value to the Deep Blue Project.

The DG NIMASA, in his remarks, commended the CAS for his prudent management of resources. According to him, under the CAS’ watch, the NAF had witnessed a tremendous boost in its aircraft holding, through systematic acquisition and reactivation of platforms. He therefore applauded the quality of leadership of the service.

While stressing the importance of cooperation between the NAF and NIMASA, the DG noted that both agencies have mandates that are somewhat interwoven. He reiterated NIMASA’s stance on zero tolerance for piracy on the nation’s waterways, stating that the NAF’s deployment of its air assets and special forces would help tackle the issues head-on for the overall good of Nigeria’s maritime sector and the nation as a whole.