Arguably, final performances at ceremonies are mostly memorable sometimes owing to how they highlight intricate details of complex art forms. This year’s Musical Society of Nigeria’s (MUSON) concert celebrating its 2020 graduands was no different in applying this theatrical strategy.

Enter Benue state born soprano singer, Okwori Mary Eleojo. Obviously, the concert’s crème saved for the last slot, she and Segun Owele performed Francesco Sartori’s classic, ‘Time to Say Goodbye’. Flanked by The String Ensemble, a pianist (Tunde Sosan) on the grand piano, and a choir to help lift background vocals to the heavens, Mary took to the stage perfectly harnessing the acoustics of the Shell Hall of the MUSON Centre, Onikan Lagos.

Energetic with her high-pitched vocal delivery, the neon-lit stage burst with beautiful melodies and emotions that left guests with an overwhelming sense of appreciation for talent exhibition and the sheer amount of professionalism. It was a fitting reflection of the training at the institute by world-class instructors who have continued to garner commendations for their excellent, uncompromised guardianship.

What was experienced on August 24, 2020, was the finished product – a buffet of stage expressions displayed on the backdrop of classical music instruments. And just like many of the other acts who took on several roles showcasing their musical prowess, Mary’s tale was no different. Her expedition (which she termed a crazy decision) to find her voice in the classical music scene surely paid off that evening. In 2017, the singer took a 14-hour trip to Lagos from her hometown in Benue State to pursue her dreams of becoming a classical musician leveraging the MUSON’s MusiQuest competition.

She emerged winner and progressed to apply for and secured a spot at the MUSON Diploma School of Music as a vocal performer.

Mary’s dreams to attain this level of training, as well as those of the other 29 graduates, have been made attainable by a thoughtful brand that has continued to invest heavily in the music space in Nigeria. Renowned for best practices that match international music practice, the MUSON School of Music surely demands ample resources to see oneself through its two-year diploma programme.

Fortunately, all 30 students who enrolled for the diploma programme gained unlimited support via the MTN Foundation scholarship to fast track their dreams. Just like they have done with the MTN Science and Technology Scholarship Scheme (MTN STSS) and the MTN Scholarship Scheme for Blind Students (MTN SSBS), the Foundation has continually renewed its commitment each year to brighten the lives of the Nigerian youth.

The MTN-MUSON scholarship has had a successful run for 13 years. So far, it has sponsored over 300 students, and recently hit the ground running with calls-for-entries for its 14th edition.

Appreciative of the immense contribution of the MTN Foundation towards shaping the career of students who passed through the learning institution over the years, Princess Banke Ademola, Director, MUSON School of Music said, “We thank MTNF for the golden opportunity and scholarship given to the students. More so, the unflinching support at monitoring by the staff of MTN. Surrounding the graduation ceremony of our students, although it is different this year with the COVID-19 pandemic, we still had glamorous presentations both in live stream and virtually.”

While the concert hit a crescendo with Mary’s performance, other acts held their own. Andrew Sodiari, who delivered a tenor scale vocal performance of ‘A Loveliest Night of the Year’, was one of the stars of the night. During his performance, he moved with grace or a certain audacity that revealed how much he has perfected his singing techniques.

Although having a background in music through his participation in church choral activities, it was not enough torque to push him to a bigger stage until he enrolled for his diploma. Another person sharing a similar path as Andrew is Obianom Chiemerie Emmanuel. Trained as a vocal performer, the baritone singer journeyed his audience back to the 1960’s with the infectious and dreamy jazz tune ‘L-O-V-E’, originally scored by Bert Kaempfert and Milt Gabler. He performed the number donning a burgundy suit, a broad smile and pizzazz.

Although a great body of work in classical music is rooted in western culture, scholars of the MUSON school proceeded with a touch of relatability by performing popular music from local Nigerian stars in true classical styling.

Reimagining viral hits such as Simi’s ‘Duduke’, Bobby Benson’s ‘Taxi Driver (I Don’t Care)’, and Victor Olaiya’s ode ‘Baby Mi Da’, the crowd’s reactions was one of participation through mouthing of words to these tunes.

In its capacity, the foundation looks to affect the texture and sound of Nigerian music by fully enabling these scholars. Currently, afro beats is the reference genre that describes Nigerian, and West African music at large. It is no-brainer that in future, there will be more collaborations with classical musicians.

Although this move to crossbreed local genres and classical music has already started with the likes of music star Niniola recruiting the jazzy influence of Femi Kuti on ‘Fantasy’; however, this style has yet to be mainstream. But with focus and resilience, such ventures are more likely to happen, expanding the scope and sounds of West African music.

Although most of the evening’s performances focused on the shining qualities of female and male vocalists, there were highpoints where the spotlight wasn’t on the vocal capability of an individual, a duo or group, but on the ability to manoeuvre a piece of instrument to effuse human-like qualities through sheer dexterity.

Whimsical, alluring, and animated, a string ensemble (Femi Olawoyin, Uzoma Chidimma, John Jesuyemi, Grace Obasi, Dansu Oluwatosin, George Emmanuel, John Ayorinde, and Godwin Ude) stormed the stage in their white and black attire to delivered the famous tune of Leroy Anderson, ‘Plink, Plank, Plunk’. In one accord, under the guide of a conductor, they reproduced the musical piece pitch for pitch, note for note, playing their way into the hearts of the audience.

With its tradition spanning 13 years, the stakes have grown for teachers to tutor with laser-focused precision that ensures all 30 students in each academic session master the art of music making within their specific fields in classical music, and to put up impressive stage performances when called upon.

With increased stakes for teachers, the requirement for admitting scholars has increased each year to match and compliment the tremendous effort of their predecessor while raising the bar for their successors.

Truly, no one student’s life has remained the same considering the level of push from the MTN Foundation; the initiative has emboldened them, sharpening their skills to compete with classical musicians from across the world.

At their recent virtual graduation ceremony traditionally held a day after the concert, Director of the MTN Foundation, Dennis Okoro expressed gratitude to the MUSON School of Music for their continued partnership that has helped talented youths hone their skills. He said, “On behalf of the MTN family, I thank you all for entrusting us with your gift through this programme. We are honoured to be part of your success story and look forward to the great things you will achieve.”

The vote of thanks did not start and end with the partners (MUSON and MTN Foundation), President of the MUSON Diploma Student’s Association (MUDISTA), Ayinde Felix Taiwo, gave the valedictory speech highlighting ways in which both bodies help propel their dreams from mere wishful thoughts to full-fledged classical musicians. In what can be termed a once in a lifetime opportunity, other members of the class of 2020, joined the virtual meeting via Zoom to mark the momentous occasion. The MUSON graduating class definitely showed a good performance. A testimony of the effective training they have received in the past two years. 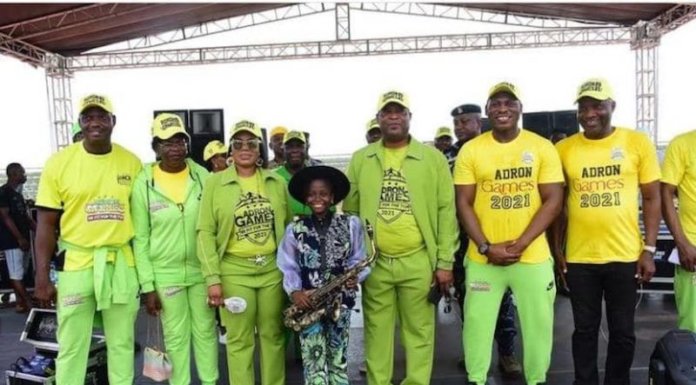