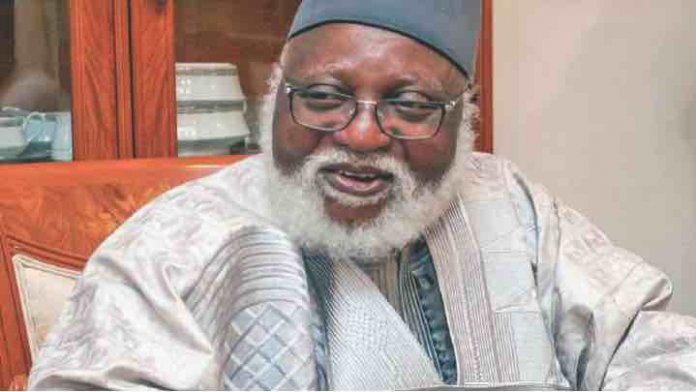 The National Peace Committee (NPC) has congratulated Godwin Obaseki for his re-election as governor of Edo State.

In a statement issued yesterday, the NPC Chairman and former Military Head of State, General Abdulsalami Abubakar, (rtd) also congratulated the people of the Edo State, while commending then over the “peaceful conduct” of the election.

He urged the governor to “repay the good people of the state with all the ingredients of good governance, justice (and) equity” as he commences his next tenure.

The NPC chairman also congratulated the Independent National Electoral Commission (INEC), security agencies and even Obaseki’s closest rival in the election and the candidate of the All Progressives Congress (APC), Osagie Ize-Iyamu.

“I want to congratulate the Chairman of INEC, Professor Mahmoud (Yakubu) and his team, the Inspector General of Police, other security agencies, and civil society groups for doing such an excellent job and making great sacrifices. It is our prayer that every election will bring us closer to peace.

“I want to thank the Oba, His Royal Highness, Omonoba who teamed up with our committee to deploy his moral authority in the appeal for peace.

“Finally, our congratulations to the contestants, to Godwin Obaseki, the winner, Pastor (Osagie) Ize-Iyamu and others who sought the office of governor.

“Your Excellency, Governor, it is our prayer that you will repay the good people of Edo state with all the ingredients of good governance, justice (and) equity. Once again, accept our congratulations and may God guide you,” he said.