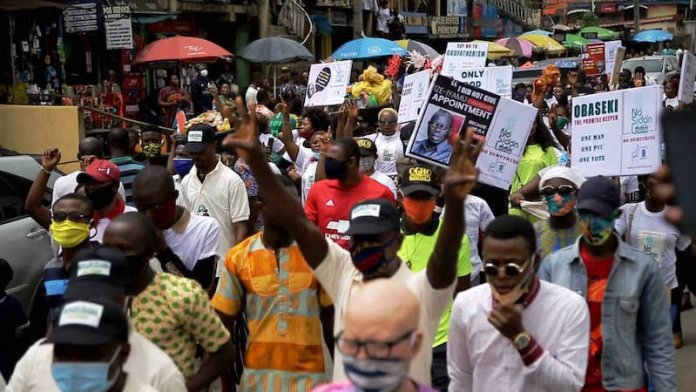 Alliances can make and mar us. Jehoshaphat, King of Judah (south of Israel) was a man who sought the face of God. He was a decent ruler. But his yoking with kings of base virtue ruined his legacy. In particular, his dalliance with the house of Ahab and Jezebel impaired his bloodline and nearly cost him the glory of Yahweh.

Power is a principal thing but the path on which we tread to its courts matters. I think it is hypocritical fighting a system but at the same time enjoying the dysfunctionality of that system.

The Edo governorship election has taken its place in the past of gritty and rousing contests. But the lessons from the election will remain fecund in our political discourse. One thing stands out. Nigerians detest the ‘’contrivances of godfatherism’’. The election is inherently an action against godfatherism and all its appliances. The ‘Edo no be Lagos’ mantra is a revolutionary shibboleth which conveys the coup de grace to an endemic political scourge.

I think Bola Tinubu, national leader of the All Progressives Congress (APC), set up Osagie Ize-Iyamu, candidate of the party, by insufferably putting a demand on the people of Edo State on who they must vote. Nothing irritates more than valorous arrogance. Tinubu over-estimated his influence. That broadcast he did a few days to the election adjuring the people of Edo to reject Obaseki on the grounds that the governor is a dictator in no small measure ricocheted, putting craters to Ize-Iyamu’s ambition.

Also, the first rule of godfatherism is “do not act like a godfather’’. Adams Oshiomhole, former national chairman of the APC, broke this canon by stepping beyond the remit of his mortal powers and attempting to wrestle with the celestials. His ego got the better of him. He wanted to whip an ‘’erring’’ godson to shape but lost himself in the process. He cut off his nose to spite his face.

Oshiomhole’s nemesis is graphed in this dictum by my friend, Sulaiman Aledeh: ‘’Legend has it that there once lived a powerful man who was so disturbed by a rat in his home. He burnt down his house in an attempt to kill this rat. The rat did not die; it jumped out of the inferno leaving the man without a home – he became homeless.’’

But what is next for Obaseki? Will he rebel against his new “godfather(s)’’ in the PDP who gave him the platform to fulfil his ambition? And is his re-election the end of godfatherism in Edo as he bravoed? I think not. As I said in a previous article, “our political process is cannibalistic; it is dog eat dog. National interest succumbs to group and individual interest in our brand of politics. It does not reward rebels or people of independent disposition. To chance on political office, you must contort your principles and personal integrity to fit into the agenda of the keepers of the political platforms, notoriously regarded as the ‘godfathers’. The godfathers control these political platforms. They hold the reins of political progression. So, as long as the present political ecosystem subsists, godfatherism will remain in Nigeria.’’

Really, I see Obaseki fleeing from one godfather drama to another. The governor will realise soon enough that his new political benefactor, Nyesom Wike is an absolutist; a one of kind godfather. Wike combines brute with arrogance. He does not fancy otherness or contraries. It is his way always.

The governor of Rivers State runs the PDP – by virtue of the resources at his disposal. The party conforms to his whim and caprices. It is said in PDP circles, you cannot get anything done in the party without Wike’s blessings. In September 2018, he threatened that there would be consequences if the PDP moved the party’s national convention away from Port Harcourt. The leadership of the party quickly fell in line.

When Wike sneezes the PDP catches cold. Clearly, Obaseki understood this as he hurriedly paid obeisance to Wike soon after he defected to the PDP – when the APC rejected him. In the build-up to the Edo election in June, Wike threatened to withdraw support for Obaseki over a publication alleging he was in cahoots with some persons to stop the Edo governor from participating in the party’s primary election – and as it is customary there was grovelling and back-bending to the godfather and ‘’national governor of the PDP’’.

Wike was named PDP Edo campaign DG principally as a recognition of his pre-eminence in the affairs of the party. He is the PDP. He holds the reins of political progression in the party. He calls the shots. He is the godfather.

But how well can Obaseki navigate through the relationship maze with Wike who is short-tempered and domineering?

Well, I foresee that there be will spheres of conflict between Obaseki and Wike; not necessarily as regards areas of administration in Edo, but on differences in political interest and pursuits.

Obaseki must beware of the new godfather and the godfathers in the PDP.