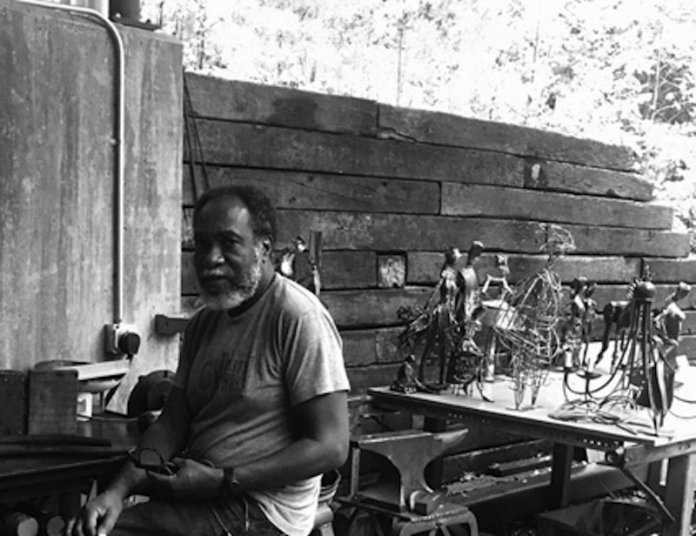 Chances are that none among the elite Nigeria’s metal sculptors can hold a candle to Olu Amoda. Of course, while due recognition may be accorded to their individual accomplishments with the medium, the 61-year-old former Yaba College of Technology lecturer is still clearly in a different league. Put this down to his lustrous credentials in both the local and international art scenes and his prodigious transformation of discarded metal pieces into intriguingly stylised sculptural works. Growing up in the Delta State community of Okere, Warri, Amoda recalls always having had the predilection for designs. Back then, he used to carve masks and construct cardboard cars as well as miniature buildings. “My earliest encounter with three-dimensional works,” he prefers to label these modest efforts, which he quickly adds were not associated with sculptures per se.

Skip to his first year in the experimental art school of Auchi Polytechnic in 1979. His intention to study graphics – and not even paintings – was a nod to his early exposure to design. But then, his early art teachers were not grounded enough in art to have imparted the requisite skills to him. Indeed, driven by this passion, he first got an admission to study architecture at the Enugu Campus of the University of Nigeria, Nsukka, but had to give it up because he did not have his West African School Certificate Examination result.

At the Auchi Polytechnic, he had found more freedom of expression in sculpture than in graphics and paintings or in textile and ceramics. “I needed freedom,” he muses. “I felt liberated in my first sculpture class, in which my very first sculpture was to revisit my childhood cardboard sculpture constructions.”

Talking about that first sculpture, it was a cardboard construction of a bird, which was adorned with leaves. In it were infused elements of graphics and paintings. His learning, he says, was under some of the great minds, to whom he remained in close liaison till date. Their instructions and materials from the institution’s library helped his odyssey in sculpture to take off on a promising note. “It was an easy odyssey, because of those in whose company I travelled. At the very beginning, my instructors were upfront. They said it would be bumpy, but always self-fulfilling. Regrets were deemed opportunities, so long as one was not seeking answers, but raising issues…”

Several years later… Amoda, then a lecturer at the Yaba College of Technology, was living in a modest bungalow along Majaro Street, which was within shouting distance to the University of Lagos campus in Akoka.
His “Doors of Paradise” series was at that time stirring up interest among aficionados in the local art circles. Its relevance – both aesthetic and functional – had engraved his name in the industry’s consciousness as a master of his medium. Yet, the series was, for him, only a reaction to the Lagosians’ obsession with security! Back then in the 1980s, the current trend of erecting high walls and gates was already in vogue. Doors and gates were not only designed to protect homes from potential burglars or intruders, they also proclaimed the social status of the owners.

For the Delta State-born artist, living in the University of Lagos staff quarters, where flower-hedges – rather than walls – demarcated every compound, was but a subtle initiation into the Lagos scenario. Then, with the increasing cases of burglary – usually by the domestic staff – some professors started to erect welded wire mesh fences with gates around their residences. Among these professors were some who appeared more materially successful with their fleets of cars. Outside the campus, the obsession for security seemed much worse. Affluent homes were concealed behind very high walls, on top of which were razor-sharp barbwires. These walls, sometimes, were connected with electrical currents to ward off potential intruders. And there were even cases where the holes in fancy block walls were sealed up.

This was the Lagos that first sought to intimidate Amoda, a much bigger city than Warri. He realised that on account of its size, there is a stark contrast between it and the more laid-back Warri, where he came from. This was also the time when his metal artworks were posing challenges, on account of their large sizes and weights, to the galleries. Because they wouldn’t display these works in their right context, he became notorious for pulling out of ongoing shows.

Meanwhile, art for security’s sake had begun to interest him. And it helped that he was at that time imparting drawing and construction skills to his Yaba College of Technology students. These students, it occurred to him, needed to be prepared for self-employment after their graduation. So, it made sense that they explored making doors, window screens and gates as sculptures. To match his words with action, he had embarked on the production of 100 door designs for a book publication, which gave birth to the concepts of his fortified metal gates as well as the “Doors of Paradise” and “Windows of Dreams”. An immediate fallout of this was the opportunity to make large-sized functional sculptures. “It was very lucrative,” Amoda reminisces. “Anything that brought money was an easy-sell.”

A ripple effect of this was that it soon became a la mode for virtually every artist in the scene to seek ways of translating their drawings into large sculptures. Those, who could not weld created new job lines for welders. “I employed welders and made them work creatively,” he says. “The pay was good. So was the trickle-down effect since the social and aesthetic level was upgraded. I saw my gates, doors, and window as art, and this I factored into the cost. On the part of the welders, they also started to think like artists.”

Ultimately, trainees who passed through Amoda’s Wotaside Studios always left with a better understanding of art engineering. These included students on industrial attachment. But then, integrity issues began to rear up their ugly heads. Welders and students on industrial training would clandestinely collude with clients to drive down the cost. Even his colleagues, he alleges, went to the extent of placing brown papers over the gates he had constructed just to replicate the materials. “Integrity goes out of the window at the sight of money,” he adds.
Meanwhile, Amoda still produces the “Doors of Paradise” and “Windows of Dreams”, which make up his first large-scale artworks in many collections to date, at “reasonable costs”. As for the ancillary book project, he says it is still in its manuscript stage.

Self-glorification, he muses, is the driving force for a materially successful life, not only in Lagos but also in Nigeria. “Nigerians have the penchant for separation from the others. And I am no exception. They revel in the knowledge that their house is the biggest or that their car is the latest… This is our version of the Forbes list of the richest men and women. I have to engage my clients first to reflect their status in the design and, at the same time, not compromise the security consideration. Every time the door foiled a robbery, I get more briefs. The clients’ commission at the least two and sometimes as much 14 on a location. At other times, clients commissioned the doors before the buildings were designed, let alone built. The country’s situation then and now is still the same, and people have come to see security doors as a necessity.”

Nonetheless, he decries the difficulty in sustaining the symbiotic relationship between sculpture and architecture. He thinks architects in Nigeria play down the symbiosis between architecture and art. This had led to many not only designing and fabricating doors and gates in addition to designing and building houses but also to importing Israeli-made bulletproof doors or the Chinese-made doors.

Fast-forward to the recent years. Amoda’s sculptures, meanwhile, continue to assume larger dimensions. And there are a good number of them in circular shapes. Yet, the artist would rather this not be deemed “a penchant” for large-sized works. Sculptures, he explains, can be as small as wedding rings and as large as ocean liners. “What determines the sizes are two things: skill and money… The venue, where one’s work will be exhibited, also determines the range of size.”

Recently, an organiser of the ongoing touring exhibition – titled, Lend Me Your Dream – had requested four of his works. But, after factoring in the freighting costs, the organiser had to settle for two.
Indeed, the Lagos-based Art 21 gallery space was one reason he had for producing large-sized sculptures. Besides the fact that the gallery was not averse to installing large works, Amoda thinks that these allow for better expression.