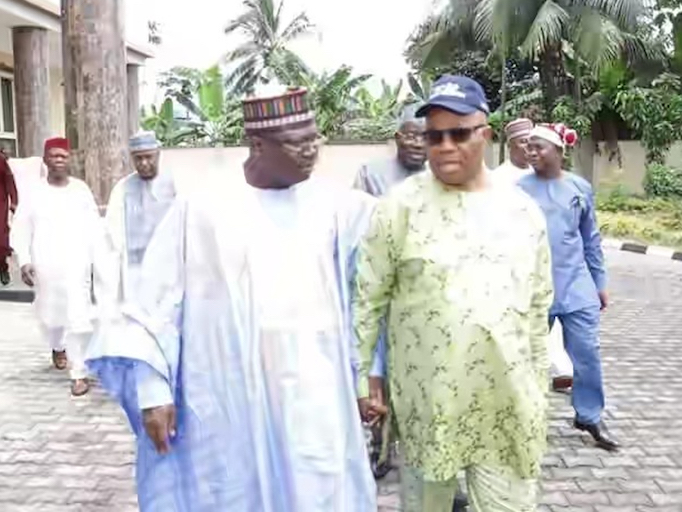 Minister of Niger Delta Affairs, Senator Godswill Akpabio, last week, paid an unscheduled visit to the National Assembly during which he met with the new management of the legislature as well as the House Committee on NDDC. But his visit has begin to generate speculations, report Adedayo Akinwale and Udora Orizu

In July, both Chambers of the National Assembly, as part of their constitutional mandate, commenced the probe into alleged misappropriation of N40 billion by the Interim Management Committee (IMC) of the Niger Delta Development Commission (NDDC). It was as a result of the probe that the level of rot in the agency was uncovered.

Before the legislative arm resolved to embark on the probe, members of the National Assembly had in May passed a resolution to investigate allegation of N40billion fraud against the IMC of the NDDC.

While the Senate raised a seven-member ad-hoc committee to look into the allegation, the House summoned the Minister of Niger Delta Affairs, Senator Godswill Akpabio and the IMC to explain to the House the plan of the commission to ameliorate the effect of the present economic situation on the region.

President of the Senate, Dr. Ahmad Lawan, at the public hearing said allegations of financial recklessness and misappropriation of funds leveled against the Interim Management Committee of NDDC were unacceptable hence the decision by the Senate to investigate the activities of the Commission.

Lawan said it was unacceptable to hear about inappropriate use of resources, or outright financial recklessness in NDDC, an important statutory agency that is supposed to improve the lot of the Niger Delta people.

According to him, the weighty allegations of misappropriation of public funds to the tune of N80 billion by the IMC prompted the upper chamber to investigate the Commission.

When the Acting Executive Director (Project) of NDDC, Dr. Cairo Ojougboh, appeared before the Senate Probe panel, he made allegations of financial meddlesomeness, contracts grabbing and splitting against the Chairman of the Senate Committee on Niger Delta Affairs, Senator Peter Nwaoboshi and his counterpart in the House, Hon Olubunmi Tunji-Ojo.

He said the move by the federal legislators to probe the agency was simply designed to scuttle the Forensic Audit currently going on at the NDDC, which was ordered by President Muhammadu Buhari, following alleged corruption by the interim management. Ojougboh also accused the Senators and members of the House of being behind the fraud in NDDC.

Much of the fireworks were witnessed in the House, when the probe commenced. It was the immediate past acting Managing Director of NDDC, Ms Joi Nunieh, that first belled the cat, even though the police, acting on an order from Abuja, had tried to arrest her on July 16 to prevent her from testifying before the House Committee on NDDC in Abuja, but was rescued by Rivers State Governor, Mr. Nyesom Wike.

Nunieh said: “On the case of the forensic auditor, I do not know if they have ever carried out a forensic audit. Can I now stand before this committee to say the lead consultant has been procured, my answer will be no. Remember, you cannot give any approval or procure any consultant without the appropriation made by the National Assembly. The 2020 budget hasn’t even been considered or discussed not to mention being passed.

However, her testimony forced the House committee to summon Akpabio and the NDDC Managing Director to appear before it.

Akpabio, while being grilled by the committee, accused members of the National Assembly of being the greatest beneficiaries of a majority of the contracts awarded by NDDC.

Asked to explain what he meant, he stated: “Just look at your Chairman, I have records to show that most of the NDDC contracts were given out to the National Assembly members. The two Chairmen of both committees can explain to you. Who are even the greatest beneficiaries of the contracts? It’s you people at the National Assembly.”

The Minister’s response, however, infuriated one of the lawmakers, who interrupted by asking Akapbio about what the National Assembly is benefiting from NDDC?

The minister responded: “I just told you that we have records to show that most of the contracts in NDDC are given out to members of the National Assembly, but you don’t know about it, the two Chairmen can explain to you. I was a member of the NDDC committee, so, I know about it.”

Akpabio’s allegation took the lawmakers off balance, rattled the National Assembly and the case of the hunter being hunted was witnessed. Both the Senate and the House challenged Akpabio to prove his allegation.

In a letter dated July 24 to the House, which gave him a 48-hour ultimatum to publish the names of the contractor-lawmakers, Akpabio said the reference he made to 60 per cent during his presentation before the House NDDC Committee was in response to a question by a member of the committee.

He said: “The investigating committee refused or neglected to give me the opportunity to explain the reference to ‘most NDDC contracts awarded since 2001 from the records allegedly to members of the National Assembly was done without the knowledge of the alleged beneficiaries. However, the two Chairmen of the committees in both chambers have adequate knowledge.

“I never referred to members of the ninth National Assembly as beneficiaries of NDDC contracts as NDDC is yet to fully implement any budget since the commencement of the ninth National Assembly. In fact, the 2019 budget passed in February and harmonised on the 5th of March 2020, was received by the commission in the middle of April 2020, when the same was designated to expire on May 31, 2020.

”It has always been known that the two Chairmen of the committees on NDDC in both chambers exhibit unusual influence to the exclusion of committee members and even the management of the NDDC appropriate funds projects after passing of line items at plenary.”

Akpabio, however, made a U-turn on July 27, when he decided to name lawmakers, who got contracts from the NDDC.

The Minister, in a document attached to his response to the threat by the House to sue him over the allegations that federal lawmakers were the major contractors of NDDC, listed four senators as receiving 74 contracts from the commission from 2017 to date.

He also accused the Chairman of the House Committee on NDDC, Hon. Olubunmi Tunji-Ojo, of inserting 19 contracts worth N9 billion into 2019 NDDC budget.

It was learnt that Akpabio’s annexure to the letter included a list detailing the names and NDDC jobs given to the lawmakers. From the list, Nwaoboshi, allegedly executed 53 NDDC projects from 2017 to date.

Akpabio also accused three other Senators, namely: Matthew Urhoghide, James Manager and Sam Anyanwu of executing a total of 21 NDDC contracts during the period under review. He also fingered Tunji-Ojo in inserting 19 contracts worth N9 billion into the 2019 NDDC budget.

Other lawmakers that Akpabio listed projects against were Senator Mathew Urhoghide (six projects), Senator James Manager (six projects); former Senator, Sam Anyanwu (19 projects), and others simply identified as Ondo and Edo representatives, even though the minister did not provide the cost of the project.

Akpabio also listed one Mutu’s name against 74 projects, which included various emergency road projects in Delta, Akwa Ibom, Bayelsa, and Rivers States. But the allegation made by Akpabio against the federal legislators led to the sudden death of the probe, which lasted for one month both in the Senate and the House.

Explaining the reason for the surprise visit, Akpabio said: “I am here to congratulate the Acting CNA for his elevation and of course to solicit the continuous cooperation of the National Assembly towards the development of the Niger Delta region.

“In any case, I am a Senator, so seeing me in the National Assembly should not be a surprise; as a former Minority Leader of the Senate and a distinguished Senator, I believe I am a Senator for life. Nobody will refer to me as Governor Akpabio, they will always refer to me as Senator Akpabio. So, this is home coming for me.

“The National Assembly is supposed to resume today but it had been postponed and I had intended that as soon as the resumption takes place, I will be here as part of my effort to support the President’s decision that there must be a much more cordial relationship between the Executive and the Legislature.”

After leaving the Senate building, the Minister went into a close-door meeting with Tunji-Ojo, the Clerk, Ojo and the spokesman of the House, Benjamin Kalu for over two hours.

Though the outcome of the meeting was not disclosed, it may not be unrelated to the National Assembly’s investigation of the NDDC. The Senate and House Committees on NDDC are expected to submit their report and recommendations on the probe, when the National Assembly resumes plenary on Tuesday, September 29th.

From all indications, Akpabio’s visit might be to soften the ground as the two committees put together their reports on NDDC ahead of resumption of plenary next Tuesday.