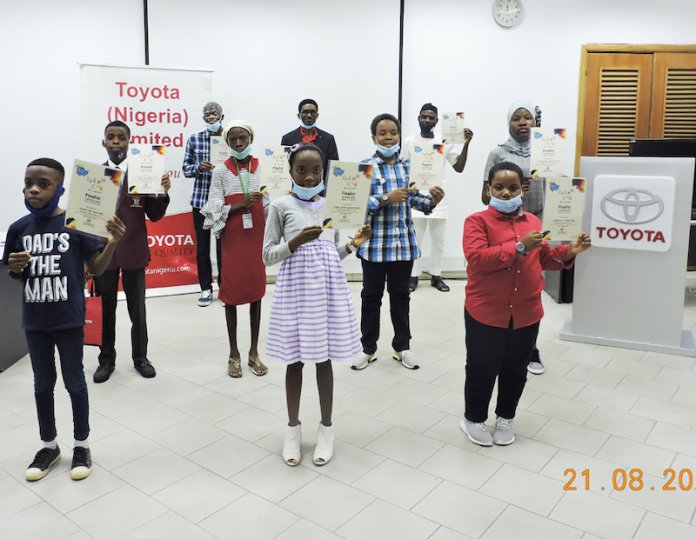 Nine winners emerged at the Toyota Dream Car Art Contest, a CSR initiative of Toyota Motor Corporation Japan to develop the innate artistic talent in children and to cultivate an enduring relationship with them.

A statement by the Public Relations Manager, Bukunola Ogunnusi said Toyota distributors and dealers alike globally have keyed into this initiative because of its acceptance and impact on children’s psyche the world over.

“The 2020 Dream Car Art Contest was held in Lagos on the 29th of February 2020. Accreditation started at 8:00am to 9:30am and the contest commenced at 10:00am. Children came from different schools to share their concepts about the future of vehicular mobility by drawing their dream cars in the contest. The contest comprises of age categories which are: 7 years and under; 8-11 years; 12-15 years,” the statement said.

She said, “850 children participated in the contest, and three winners emerged from each category, making nine winners in all that emerged winners after the rigorous assessment of entries.

“All the winning entries were judged based on the originality, creativity (the big idea behind the drawing), environmental friendliness, safety and futuristic concept in their drawings.

“The Nine winners were invited to the award of prize and certificate at Toyota (Nigeria) Limited corporate headquarters, Lekki on the 21st of August 2020. The winners attended with one parent each and winners went home with Laptops, other corporate gifts and most importantly, winner’s certificate. The event was held under strict observance of COVID-19 regulations with 20 attendants in all.”

Onafowokan welcomed everyone and encouraged the winners to continue to showcase their God-given talent positively.

He added that the platform will help build the confidence of these budding artists and future leaders in the creative world. He added that Toyota will continue to organize the contest annually as long as it remains relevant to our CSR objectives.”

Mr. Esemudje, one of the parents, thanked the organisers on behalf of the entire winners and expressed his gratitude to Toyota (Nigeria) Limited for the opportunity given to their children to exhibit their talents. He opined that the event would leave an indelible and sweet memory in the minds of the children. He encouraged TNL to continue this laudable project which he described as an unforgettable experience for the children.