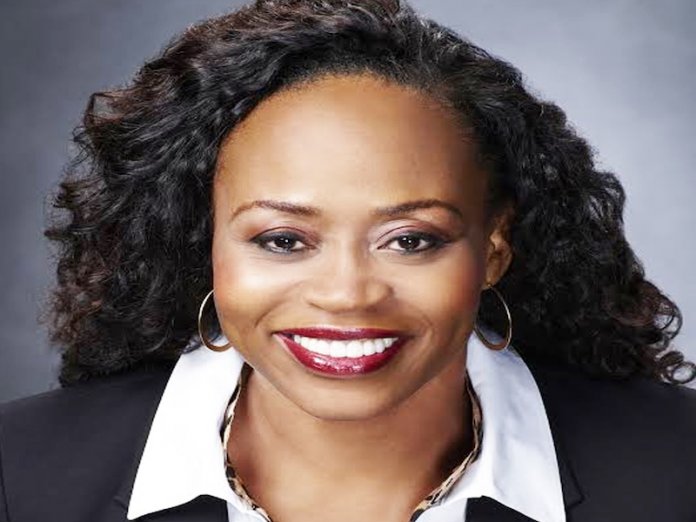 All Pearlena Igbokwe has known and achieved all her life was made possible by her knowledge of television. As a child growing up, the Nigerian-born has a special connection to television ever since her family moved to New Jersey from Nigeria in 1971, when she was 6. In the wake of the Nigerian civil war, the Igbokwes fled, leaving behind the terror of living through war. Young Pearlena couldn’t get enough televsion. The family’s small black-and-white television was her babysitter, her companion and her primary instructor in the language of her adopted home.

“I thought TV was this amazing thing,” she would years later tell Variety in 2019. “It was my best friend.” These instincts have served Igbokwe well in her nearly 30 years as a creative executive in television. “It just opened up everything for me,” Igbokwe says. “That feeling of loving TV and movies for all those years and now being even remotely attached to that world just felt incredible.” Recently, Igbokwe was appointed Chairman of Universal Studio Group in the U.S.

Universal Studio Group, a division of NBCUniversal, is one of the world’s leading media and entertainment companies in the development, production and marketing of entertainment, news and information for a global audience. The longtime TV executive will take over leadership of NBCUniversal’s global television studio business. As the new chairman, she replaces Bonnie Hammer, who will take a new role as Vice Chairman, as announced by NBCUniversal. This makes Pearlena the first woman of African descent to head a major American television studio.

According to a statement by Universal Studio Group, Igbokwe, 55, will lead the company’s growing global television studio businesses and report directly to Jeff Shell, CEO, NBCUniversal. The moves are part of a wider reorganisation of NBCUniversal’s entertainment group as it competes with a host of new and established TV streaming services. The company under Shell has been looking to streamline operations to respond to the intensely competitive realities of the new streaming era.

Before joining NBCUniversal, Ms Igbokwe worked at Showtime for 20 years and was involved in developing top-rated broadcast dramas including “Dexter” and “Nurse Jackie”, Showtime’s most popular series ever. Featured on The Hollywood Reporter’s 2018 list of Women in Entertainment Power 100, Igbokwe made waves as the first Black woman – and first Nigerian women- to run a major television studio when she took the helm at Universal Television in 2016. Under her direction, the studio churned out recent television hits like The Good Place, Good Girls, Brooklyn Nine-Nine and Russian Doll while teaming up with platforms like Netflix, Hulu, and Amazon.

During her undergrad years at Yale, Igbokwe spent two summers working for NBC in research, first for the sales department and later for NBC News. As she ran around 30 Rock completing assignments and other chores, she had to pinch herself that she was being paid to “kinda sorta work” in television. But the Showtime and NBC alum, who has headed Universal Television since 2016, didn’t know what work lay ahead in the spring of 1985, as her sophomore year at Yale University was coming to an end. She only knew she needed to hurry up and find a summer job.

An English major, while scouring the listings and fliers tacked up on the walls of the career services center at Yale, she was immediately intrigued by a notice described as a “summer associate” position at NBC in New York. For most of her career, Igbokwe worked on the buying side of TV, hearing pitches from studio executives and show runners. The move to being a seller, at a time when Universal TV was being encouraged to shop its wares outside NBC, has put her English major’s love of analyzing stories to good use.

Igbokwe’s path after college took a circuitous route through working in the financial services industry (she had to pay off loans) to business school at Columbia University. After earning her graduate degree, she landed a temporary job at HBO. Within a few months, she had offers for entry-level posts at HBO and Showtime. She opted for Showtime, where she would spend the next 20 years, first in New York and later in Los Angeles when she joined the programming team.

In 2012, when her former Showtime chief Robert Greenblatt recruited her to become head of drama development for NBC, she was ready for a new chapter. “I felt like NBC was where I started,” she says. “I knew I would love to be here.” Igbokwe has reached a point in her career and in her life where she’s reflecting on the arc of her story. For years she didn’t share much with friends and colleagues about her experiences growing up in Lagos during the 1967-70 period of Nigeria’s civil war with Biafra.

But of late, she has opened up about how she was shaped by her family’s struggles during those formative years. “Sometimes, you need some distance from a story to understand it. I saw a lot of things,” she told Variety. Igbokwe vividly recalls the horror of running into the woods with her mother and younger brother to escape aerial bombing raids above their village. She remembers the sound of helicopters that dropped food and humanitarian aid supplies out of the sky for the villagers.

Also seared in her memory is the day when she was about four and became determined to grab a sack of salt for her mother from an aid drop. She positioned herself in the perfect spot and dove on the ground as soon as the drop hit.

She didn’t count on getting trampled by dozens of adults doing the same thing. “They all just piled on me until finally someone was yelling, ‘There’s a kid under there.’ When I got up, I was covered in salt from head to toe. I walked back through my village looking like one of the White Walkers from Game of Thrones,” Igbokwe said.

The visceral memories of war and violence and scrambling for food have given Igbokwe perspective on the life she has made for herself as a respected figure in entertainment. As the mother of two teenagers – a 17-year-old daughter and a 14-year-old son – she can only imagine the fear that her mother faced in Nigeria, trying to protect two young kids while also working to secure the promise of a new life in America.

Igbokwe’s father, a teacher, was the first to leave for the U.S. with the help of an American couple that had befriended the family. Pearlena, her mother and her brother followed two years later. It was an emotional roller coaster for a 6-year-old, between the reunion with her father and the culture shock of leaving Africa to settle in Montclair, N.J. “I remember having the sense that we finally made it,” Igbokwe says. “I remember the feeling that people thought we were lucky. I was going to America.”

Most of Igbokwe’s relatives still live in Nigeria. She often wonders why fate determined that her family would be in a position to leave for a safer environment offering greater opportunities. “I’m the most grateful person in the world,” she says. “I don’t take for granted anything that’s happened in my life. From the world that I came from to work in the entertainment business, none of it was supposed to happen.” Remarkably, Igbokwe has earned her spot at the helm of Universal Television through hard work, business savvy, talent, and, most of all, kindness.