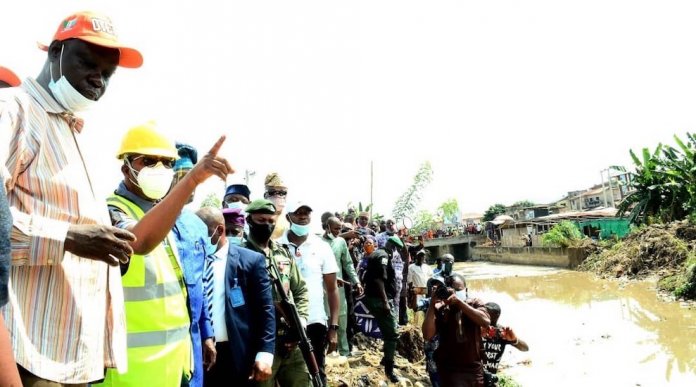 The degree of ecstacy and enthusiasm that greets the public appearance of Governor Adegboyega Oyetola of the State of Osun is becoming both interesting and thought-provoking. Recently, it was at the project to curb the menace of flooding in some parts of the state.

The governor recently commissioned massive dredging of waterways and rivers across the state, and expectedly, he stepped out on a tour to inspect how far the work had gone. It was just a tour of duty as his reflective jacket said, yet, a random observer would easily have mistaken the occasion for a carnival, giving the large crowd of the old and young that trooped out, dancing and singing at the site of the inspection to appreciate the governor. Even the sun was out, after days of unusual cold weather, as if in agreement with the celebrators.

So, what is so special about the dredging of waterways that could have necessitated so many gongs and drums and turn out of citizens? A cursory glance at history provides evidence that the State of Osun, and Osogbo in particular, had experienced painful flooding in the past that wrecked havoc, destroyed homes and even claimed many lives. These sad instances were fallouts of inadequate river channels, poor drainage system, indiscriminate and unsafe waste disposal practice among residents.

Heart-breaking and nerve-wracking episodes such as the drowning of two primary schools pupils at the Okoko stream after a heavy downpour on July 7, 2010, is one of the tragedies that the people will never forget. There were also reports of a woman who had lost two of her children to flood, which left the poor woman a mental wreck. Also unpleasant was the report about an infant that was swept away by flood on the day he was to be christened.

Governor Adegboyega Oyetola has had enough. His government is determined not to document any tales of horror produced and directed by flood. It will be recalled that Osun is one of the few states warned recently by the officials of the National Emergency Management Agency (NEMA) to prepare for an imminent flood between the month of August and October this year.

According to the NEMA Director of Operations in charge of Osun, Ekiti and Ondo States, Mr. Olusegun Afolayan, 28 states and 102 Local Government Areas in the country risked being flooded due to expected heavy rainfall in the country.

Oyetola needed no other soothsaying to give marching orders to the relevant managers in his team do everything necessary to nip a potential disaster in the bud.

And the governor himself was willing to march beside his Commissioner and Special Adviser on Environment and Sanitation, Hon Sola Oladepo and Hon Rufus Oyegbile respectively. In fact, to show that he was serious about this dredging project, Oyetola was in his T-shirt, jean, boots and safety helmet.

For the eyes of the people of Osun never to behold evil again, the entire body parts must spring a quick reaction. For the state to be rid of the groaning that flooding brings along with it, a proactive intervention is required, and that is exactly what Oyetola did.

The river that passes through the Rasco area of Oke-fia in Osogbo, the state capital, which was the first point of call during the governor’s unscheduled visit, was dredged to remove debris preventing the free flow of water. With about 1.3meters depth attained through the exercise, the water flowed seamlessly again. Imagine the turn of events had there been a heavy downpour, with the river in its former state?

History also furnished us with the fact that Rasco area of the state capital has always been prone to flooding over the years, with a spotlight on 2009, 2010 and 2015, when many buildings were submerged, lives were lost and properties worth millions of naira were washed away by the devastating flood of those years.

Besides the Rasco bridge area, Oke-Ijetu, Lake 264 and about 17 other rivers, streams and canals across the state are also currently being dredged and channelised to prevent the fury of the floods.

From the inception of his administration, Oyetola had been unequivocal about his desire to protect citizens of the state from both actual and potential threats. His interventions across different sectors continue to validate his declaration and further establishes that with Oyetola, all lives matter.