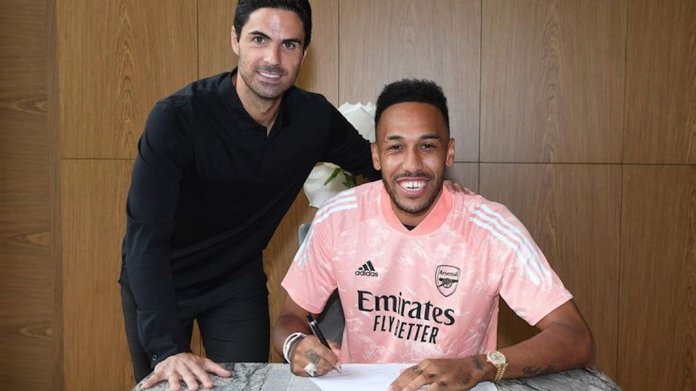 Arsenal have confirmed striker and Captain, Pierre-Emerick Aubameyang, has signed a new three-year deal with the club.

Gabonese Aubameyang was the Gunners’ star performer throughout the 2019/20 season, being named their player of the season. His 22 goals in the Premier League fired his side to an eighth placed finish, while he was at the double in the FA Cup final against Chelsea and also scored in their Community Shield triumph.

There were serious doubts over his contract situation, with his previous deal set to expire next year, and the Gabon international was hesitant to face questions on the negotiation impasse soon after that FA Cup final.

However, Arsenal have now confirmed the news all fans of the north London club have been eager to hear.

UK’s newspaper, The Athletic claimed that the new deal will make Aubameyang the Gunners’ top earner.

Manager Mikel Arteta is thought to have played a large role in convincing the former Borussia Dortmund star to stay.

However, discussions in the past few months have been positive, with the progress made by Arsenal on the pitch one such plus point.

Aubameyang had got Arsenal fans pretty hot and bothered by tweeting an hourglass emoji in mid August, hinting at imminent contract news. He then tweeted the same emoji on Tuesday before Arsenal’s official announcement, which all in all was a little odd.

Arsenal previously confirmed the permanent signings of Pablo Mari and Cedric Soares in August, while Willian was brought in after his contract at Chelsea expired.

Central defender Gabriel Magalhaes was also bought from Lille for a fee around £23m.