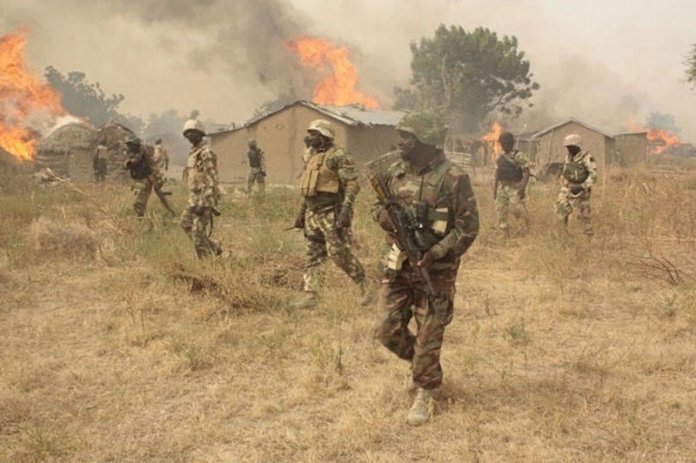 Fighter jets and helicopter gunships of the Air Component of Operation Hadarin Daji yesterday destroyed a camp of armed bandits in the Doumborou Forest area of Zamfara State, killing scores of bandits.

The air strike, which was executed as part of a new subsidiary operation, tagged Wutan Daji 2, also resulted in the killing of several armed bandits belonging to the gang led by a certain ‘Dangote’.

This is coming as troops deployed in Daki Takwas intercepted and arrested 17 armed members of a banditry gang, Yansakai on seven motorcycles at Danmarke village in Bukkuyum LGA of Zamfara State.

Preliminary investigation revealed that the suspects were from Maga in Kebbi State.

A military update on the war against armed banditry issued by the Directorate of Defence Media Operations (DDMO) said the target (bandits) was designated for attack after Human Intelligence (HUMINT) reports as well as series of confirmatory aerial surveillance missions indicated that ‘Dangote’ and some of his members, along with their logistics items and rustled livestock, had established a new camp at the southern edge of the forest.

“The attack aircraft engaged the target area scoring accurate hits and taking out several of the bandits, while some of their structures were seen engulfed in flames.

Sources later revealed that several of ‘Dangote’s followers were neutralised in the air strike”.

The update signed by Brigadier-General Bernard Onyeuko, said preliminary investigation revealed that suspects were from Maga in Kebbi State.

Items recovered from them include 12 locally fabricated dane guns, seven motorcycles and assorted charms. “Suspects are in custody undergoing further interrogations,” it said.

In another encounter, troops on patrol rescued 14 persons kidnapped by suspected bandits along Dutsinma-Yantumaki road.

The victims, who were travelling along the route in a commercial vehicle, ran into the bandits who diverted their vehicle in an attempt to take them hostage.

“However, following prompt information by eyewitness, troops quickly mobilised and pursued the bandits forcing them to abandon the vehicle laden with passengers. All 14 victims were safely rescued”, it said.