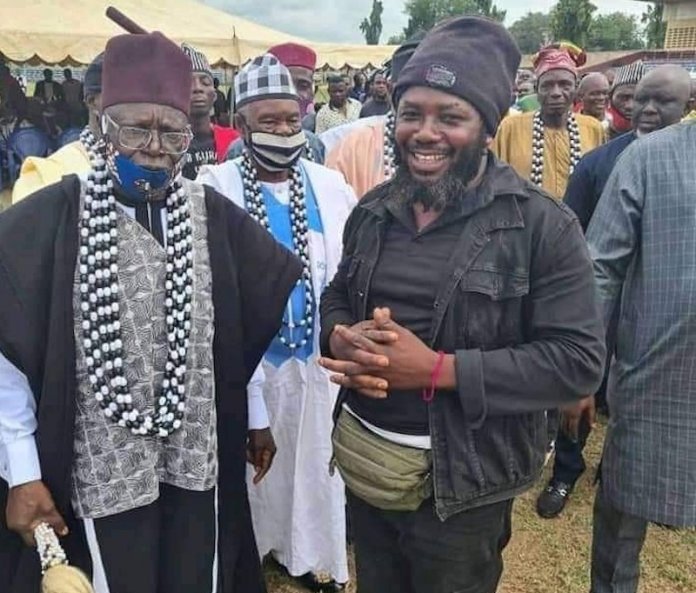 Chiemelie Ezeobi writes that after years of eluding arrest despite a N50million bounty placed on him, Benue’s self-acclaimed king of the underworld, Terwase Akwaza, alias Gana, recently met his waterloo in controversial circumstances

For years, Terwase Akwasa, alias Gana, proved elusive. He was the king of the underworld in Benue but his tentacles covered the entire North-east region. He was notorious for alleged several criminal activities including banditry, kidnapping, assassinations, ritual killings and cattle rustling. He even orchestrated terror on his own people.

Many conclude that Gana constituted himself into an alternate government and enjoyed the status of a maximum ruler in the jungle. His area of operation was mainly what is known as the Sankera geo-political axis which comprises Katsina-Ala, Ukum and Logo local government areas of Benue State.

He presided over the activities of that empire from the jungles of Gbise, his immediate community, where he enjoyed the protection of the community which played a big role in shielding him from the arm of the law.

But on Wednesday, September 8, 2020, marked the end of his era. He died in controversial circumstances, just as he had lived. He wanted to be seen as a saviour and a defender of the Tiv people against external aggression. But close observers note that he perpetrated atrocities on his kinsmen even while claiming that he was protecting them against external aggressors.

When Governor Samuel Ortom initiated an Amnesty programme in 2015, Gana was the greatest beneficiary. On the last day of the programme, he turned in 84 assorted firearms and thousands of ammunition. He was granted Amnesty and made leader of the beneficiaries. The state government made him a revenue consultant as part of his rehabilitation and that of the other beneficiaries and he made a fortune.

Spurred Amnesty
For whatever reasons known to him, he later spurred the amnesty given to him and went back to a life of crime. After he reneged, it was alleged that he sponsored the assassination of the Senior Special Assistant to the Governor on Special Security, Mr. Denen Igbana. Instead of making himself available for investigation and the judicial process, he returned fully to crime.

Given the widespread effect of his criminal activities on the people, the Benue State Security Council moved against him by declaring him wanted and placing a bounty on him of N10 million which was later increased to N50 million.

The state security apparatus carried out several expeditions to his enclave in a bid to arrest him, all to no avail. These efforts were later complemented by the Federal Government which joined the manhunt through, first “Operation Ayem A Kpatuma” and later “Operation Whirlstroke”. All efforts to track and arrest him, however, proved abortive.

Meanwhile, from his enclave, he ran an organised and sophisticated network of criminal activities in his chosen domain and conducted affairs with an iron fist. Any challenge to his authority was met with death. Findings reveal that at Gana’s orders, whole communities were razed down.

His activities which came to their peak between 2015 to 2020 led to the near total collapse of socio-economic activities in that axis. He strangulated the entire Sankera area which used to be the most productive part of Benue State particularly in agriculture. It is this geo-political axis that gave Benue State the status of Food Basket of the Nation.

It is reported that Gana killed his victims with relish. He was alleged to have buried many alive and gunned down many at the slightest provocation. In this manner, several traditional rulers were killed in cold blood including the District Head of Mbayongo, Chief Aloo Alev, and his counterpart in Michihe, Chief Chiahemba Livinus Shom,in Katsina-Ala Local Government Area.

His latest victim amongst traditional rulers was Chief Awua Alabar, District Head of Kundav in Ukum Local Government Area, who was gunned down in the presence of his family.

Outside this group numerous others from various walks of life had incurred his wrath. These include Mr. Igbana, Senior Special Assistant to Governor Ortom on Special Security and Msugh Tyavyar alias Pastor whose roles in the prosecution of the first Amnesty programme he considered a threat to his interest. Both were brutally gunned down by people believed to be sent on the orders of Mr. Akwaza.

Perhaps what many consider incomprehensible and most dastardly was the abduction and murder of Mrs. Esther Nguumbur Tur, wife of Justice Tine Tur of the Court of Appeal and her companion, Mrs. Mbalamen Kpensuen Aminde, allegedly on the orders of Mr. Akwaza, after collection of ransom and seizing of the Hilux van vehicle in which they were abducted. The Appeal Court Justice could not survive the trauma of his wife’s murder. He died shortly afterwards.

He was at the centre of the crisis brewing between Benue and Taraba border communities leading to the death of many and destruction of property worth billions of naira on both sides. Gana was believed to be the man behind most kidnappings in Taraba and Benue States. His Tiv kinsmen innocently suffered the consequences of his dastardly actions on many occasions.

Those in the know state that the notion that Gana was defending Tiv people from Fulani attacks is one of the most fictional stories of this decade. Investigations do not point to any instance when Akwaza put the interest of his people above his quest for personal glory and wealth. He was known to be responsible for cattle rustling in conspiracy with Fulani elements.

Infact, they stated that he was never a defender of Sankera people! This is because he placed special levies on farmers, traders and prominent people in his domain. Failure to pay meant death. He fought supremacy gang wars with his former allies which visited devastation on several communities in Ukum and Katsina-Ala local government areas.

Another Amnesty Offer
This state of affairs prompted prominent indigenes of the geopolitical axis, including political, religious and traditional leaders to request for a second Amnesty programme. Thus on Friday, September 4, 2020, Governor Ortom while on project commissioning and inspection tour of the Sankera axis accepted the request of the leaders.

The governor gave an ultimatum for those who wanted to embrace the second Amnesty to surrender their weapons on Tuesday, September 8, in order to become beneficiaries of the programme.
Before the governor’s recent visit, major stakeholders from the Sankera area had done painstaking work to persuade those with illegal weapons in their custody to embrace the second Amnesty programme by surrendering those weapons.

Such were the circumstances that Gana found himself in the second Amnesty programme.
In company of religious leaders, he left his hideout and presented himself at the Emmanuel Akume Atongo Stadium in Katsina-Ala in full public glare to embrace the programme.

The State Security Council was holding a meeting at the New Banquet Hall of Government House, Makurdi where the second Amnesty programme was to be formalised.

Military Interception
Selected traditional rulers, prominent indigenes and security personnel took off with Mr. Akwaza and other potential beneficiaries from the stadium to come and present them to the Council. This was where things went awry. On their way to Makurdi, the military intercepted the convoy at Masaje, close to Yandev in Gboko Local Government Area.

They pulled the Katsina-Ala Local Government Chairman, Alfred Orya Atera and his security detail, a former House of Assembly member, Dr Ianna Jato, out of the official vehicle in which Gana was being conveyed to Makurdi. The military took the vehicle and Mr. Akwaza away. They also arrested close to a hundred other potential Amnesty beneficiaries from Katsina-Ala, Ukum and Logo local government areas.

Later reports were received that the military killed some of the potential beneficiaries near Moji Farms after Tse-Kucha, and later they killed Gana at another location in Nasarawa State.

News of this development filtered into the venue of the Expanded State Security Council meeting as unconfirmed rumours. Reliable sources reveal that most of those present, including Ortom, Senator Gabriel Suswam and the Tor Tiv, Professor James Ayatse, were shocked.

This prompted the abrupt end of the meeting. Ortom while addressing journalists later stated that the convoy conveying Mr. Akwaza and other potential Amnesty beneficiaries had been intercepted and that Major General Adeyemi Yekini of Operation Whirlstroke had confirmed this and promised to get back to him.

What came next was a statement from the Commander of the 4 Special Forces based in Doma, Nasarawa State, Major General Moundhey Gazama Ali, that Gana had been killed in a gunfight with the military, with the picture of the wanted gangster at the back of the official vehicle of the Katsina-Ala Local Government Chairman.

When the news of his death filtered out, it was met with mixed reactions- while some thought his death was justified given the enormity of crimes he committed, others declared it as extra-judicial killing because he had laid down his arms.

While some think the government lured him out to betray him, other allude that the the military acted out a script to eliminate him and pave way for further unhindered attacks on Benue communities.
Yet, there are others who think it is the law of karma or retributive justice that has caught up with Gana.

For those that consider Gana’s death an act of extra-judicial killing, they stated that given the fact that he had surrendered, he was no threat at that moment. They further argued that Gana and other members of his gang were entitled to be subjected to the judicial process, in accordance with civilised norms and global best practices.

Fear of Reprisals
Those in the know said the governor was blindsided by the military as they were as shocked as others in the security meeting when the news of Gana’s death filtered in. According to them, they never reckoned that the military would eliminate Gana on the way to Makurdi.

They said the governor wasn’t privy to the military operation and that the military seized the opportunity to upturn what would have been a seamless transition. Citing that from the first Amnesty programme, Ortom had indicated clearly that he was committed to the carrot approach and as a man of his word, he could not have broken his word by arranging Gana’s elimination.

For the government and its people, the fear of reprisal looms as the death of Gana looks like a betrayal of trust. Given Gana’s large network, some of whom are still at large, peace remains elusive.

While the police said they are geared to curb any uprising while maintaining peace and order, the
fact remains that Gana’s death signals the end of an era.