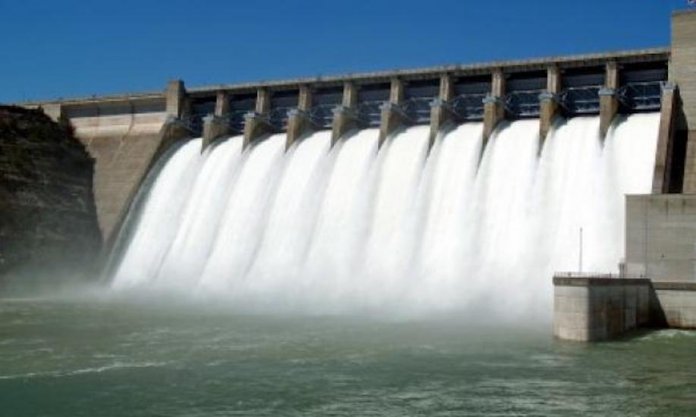 Part of the embarkment of Kainji Dam in New Bussa town, Borgu Local Government area of Niger state has collapsed.

The dam, which is across River Niger in Niger State, was opened in 1968. It was designed to have a generating capacity of 960 megawatts (1,290,000 hp); however, only 8 of its 12 turbines have been installed, reducing the capacity to 760 megawatts (1,020,000 hp). The dam generates electricity for all the large cities in Nigeria, while some of the electricity generated is sold to the neighbouring Niger Republic.

The collapse of the embankment of the dam followed the opening of the four spillway gates of the facility to throw out surplus water as a result of heavy rains.

THISDAY learnt that the incident occurred on Sunday after the management of the dam, Mainstream Energy Solution Limited, decided to open the spillway gates when it was discovered that the dam was impounding more water than it could impound.

“We opened the 4 spillway gates because of the pressure of water. Now, it is hitting the embarkment. If the embarkment is not reinforced it will continue to hit the ground directly.

” It will continue to expand and get deeper,” a top official of the firm confided in THISDAY.

“The embarkment of the dam is falling, rocks are falling into the water,” the official said.

THISDAY further learnt that there is no immediate threat to the dam but that if the water spilling out is not checked it could affect the ” safety office” of the company because the facility is wrongly positioned.

It was further learnt that the latest development was not the first time, as a source said “it is a periodic happening, I don’t know why they have not corrected the situation.”

Alhaji Abdulrasaq Jakada, a top palace aide, also confirmed the story saying the Emir, Alhaji Mohammed Dantoro, has been informed of the development.

Meanwhile, technicians of the Mainstream Energy Solution Limited are said to have inspected the damage with a view to carrying out repairs.