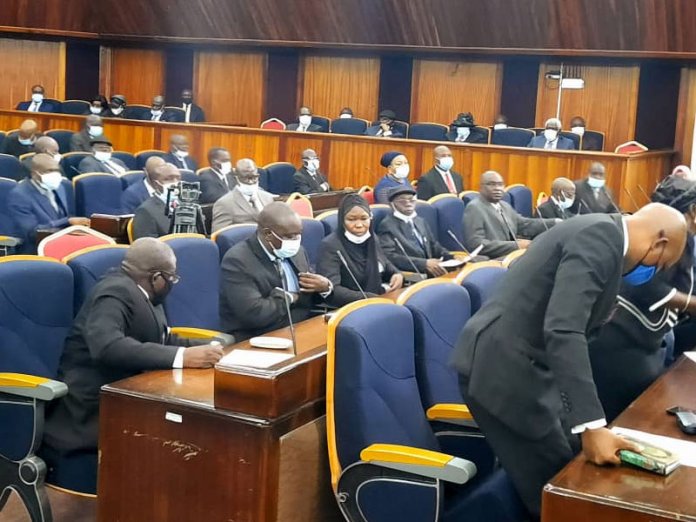 The swearing-in, which took place at the headquarters of the Supreme Court, was done despite protest by a group in the South-east geopolitical zone, against the exclusion of the zone.

The group, the Registered Trustees of Social Justice and Civil Rights Awareness Initiative, had dragged the federal government before a Federal High Court in Abuja, over the appointment of judges for the High Court of the FCT.

The group, in the suit marked: FHC/ABJ/ CS/ 830/2020, had prayed the court to compel President Muhammadu Buhari to include at least one person from the South-east into the list of newly appointed judges of the FCT High Court.

Besides the president, other defendants include the National Judicial Council (NJC), the Judicial Service Committee of the Federal Capital Territory, the Attorney General of the Federation (AGF), the Senate and the Federal Character Commission (FCC).

The counsel to the defendants, Alozie Nmerengwa, further sought the discontinuation of the process of appointing new judges to the FCT High Court until the defendants comply strictly with the Federal Character principles as enshrined in the 1999 Constitution.

Meanwhile, the CJN urged the new judges to be on top of their games, warning that the Judiciary, under his watch, would not condone any form of indolence among judges.

Muhammad noted that as ministers in the temple of justice, judges should always be guided by the laws of the land and remain faithful to their oath of office.

He advised them to detach themselves from judges that have the penchant for sitting whenever it suits their desire.

“Know it today that your subsequent elevation to the appellate courts will be roundly dependent on, not just the number of judgments you give within a certain time frame, but also the quality and impact of such judgments on our jurisprudence.

“The position you now occupy is seen as the hallmark of integrity and moral rectitude. Your passion for those conducts that may easily fail integrity test must begin to diminish, as all eyes now ply through your demeanour and disposition at a supersonic rate,” he said.

The CJN added that judges should endeavour to live above board and within their limited resources, adding that the Judiciary “is not a bed of roses neither is it a stream that flows with milk and honey”.

“It is purely for those whose lifestyle recline the bounds of contentment. That is the sole reason why we are the oracles of God on earth.

“Like we always say, many are called, but few are chosen. Your success is not as a result of extraordinary brilliance or industry, but sheer providence because there are several others out there who can equally accomplish tremendous success if given the opportunity.

“You must prove your mettle and leave an imprint in the sands of time,” the CJN said.

He urged them to see their appointments to the High Court bench as a call to service and never allow personal ambition, which might not be in tandem with what is required of them, to override their sense of judgment.

He however warned that the Nigerian Judiciary is more than ever prepared to weed out the bad eggs in its midst.