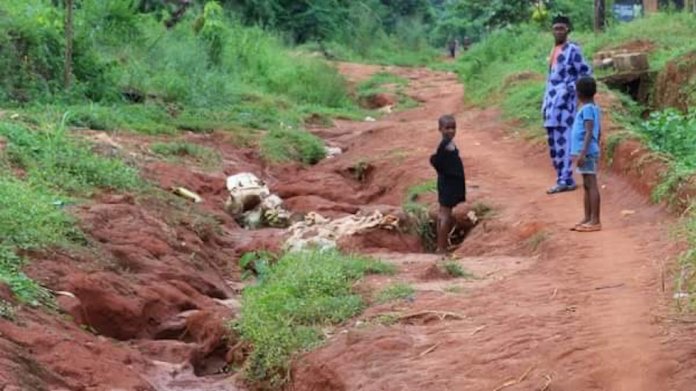 Chiemelie Ezeobi writes that baring any palliative, the people of Ubulu-Uku, a Delta community, lies on the brink of isolation as the only link road to other communities is at the verge of complete annihilation

A tree cannot make a forest neither can a community cut off from its neighbours flourish. This is the case the Ubulu-Uku Community in Aniocha South Local Government Area of Delta State.

For a decade, the community has been riddled with bad roads, often almost cutting them off from their neighbours, which they tried to ameliorate over the years. But now, the situation has completely gotten worse. THISDAY had also done a report on the state of the roads in the community and it seemed succor had finally come.

But in a recent appeal by the community to both the federal and government, they urged them to repair the only access road that leads to other communities- the Ubulu-Uku-Onicha-Ugbo Road.

Especially with the rains now, the road has been destroyed by erosion and is impassable to the extent that walking through what is left of the track is like mission impossible. The community disclosed that only their strong youths can summon courage to pass through the road, but most times, they end up in traditional bonesetters homes.

They noted that their clamour for help from the FG and the state government was their discovery that the contract for the road project was awarded to a prominent son of Delta State by the Niger Delta Development Commission (NDDC). They also charged the Minister of Niger Delta Affairs, Senator Godswill Akpobio; Speaker of the House of Representatives, Rt. Hon. Femi Gbajabiamila, and all well-meaning Nigerians to come to their rescue.

Also, Ubulu-Uku people at home and in diaspora have unanimously appealed to President Buhari and Sen. Akpobio to declare a state of emergency on the road. They also made a passionate appeal to the World Bank to assist in the road repairs while investigation into the contract award is on.

Mr. Pius Monye, who spoke from the United States of America called on Governor Ifeanyi Okowa to quickly intervene. In his call to the governor, he alleged that “the contract of this road has been awarded many times to a prominent son of the state, the last being in 2015, and till date the job is not done. All we have there is abandoned equipment and serious threats to my people.

“Each time we make noise about the road, the man would send a few workers who would grade the road and leave it in a worse condition, as he did last November. The road is in a more terrible condition than it was before he came to grade it.

“My people are living in fear because of his threats to deal with anyone who dared to report him to the authorities. My people are helpless. Your Excellency, my people voted for you and we believe in your leadership; so, it will be appreciated if you can take care of the Ubulu-Uku-Onicha-Ugbo road.

“Secondly, as a governor, use your good office to ask why the person the road contract was awarded to is against the good people of Ubulu-Uku and what he stands to gain with all the threats to deal with my people. We are aware that the road contract has been awarded many times to someone.

Activist, rights crusader and convener of #Saveubuluroads, Esther Nwogwonuwe, who spoke from the United Kingdom, said: “We all know that the contract has been awarded about four times. The most painful thing is that he abandoned all the projects in communities that gave him massive votes. Ubulu-Uku, for example, is PDP and loyal to delivering PDP aspirants in every election.

“Why has the party in the state decided to pay Ubulu-Uku with evil and wickedness? The senator has bitten the fingers that fed him by abandoning such a multibillion-naira project. The entire Ubulu-Uku/ Onicha-Ugbo communities will never forget such criminality and wickedness. We, the people of Ubulu-Uku in the diaspora, can no longer travel home; we love our rich culture and heritage.

“We love our annual festivals, we used to return home annually, if not for the festivals but for Christmas and New Year celebrations. Now this is no longer possible. What is the essence, when we can’t access the roads to our homes? What is the essence of returning home only to break our limbs and end up in bonesetter’s homes? Even my people in Nigeria who are not based at home don’t bother to come back.

“Some of our relatives who lose their loved ones outside Ubulu-Uku, living along the road, do not bother to bring the deceased home for burial. Traditional weddings have been done outside the community. What is the essence of coming home with friends and colleagues only to be embarrassed by not arriving home? So, we are calling on the presidential panel investigating NDDC projects to look into the issue raised on Ubulu-Uku-Onicha-Ugbo Road.”

On her part, 90-year-old Madam Grace Kolu has appealed to government to do urgently fix the road before she joins her ancestors: “My fear is that when the Lord calls me, there is no way for sympathizers to pass to come and give me a befitting burial. I have been confined at home, I can’t go out. Even though I am old, God gave me strength and I was physically strong. I used to trek to visit people, but now I am down and weak because I can’t go out for exercise.

“The worst of it all is that the Reverend Father who used to bring communion to old people has stopped coming here because the road is impassable. He nearly broke his legs the last time he came. When we heard the road was being repaired before Christmas last year, we rejoiced and prayed for whoever was bringing joy to us, because the road became passable and our children came home.

“But after Christmas, the road was abandoned again. During the first rain, erosion swept away all the repairs on the road and dug gullies in it. It became worse. I am on my knees begging my son, Okowa, to do something about the road.”

A farmer, Monday said: “We rely on our farms for sustenance, because we are predominantly farmers. The only access road to our farmland has been totally destroyed. We cannot take our farm produce to the market. Foodstuffs are wasting away in the farm; no vehicle, motorcycle or wheelbarrow can pass through the road. How do we carry our produce when we are afraid of breaking our limbs? It is a terrible thing to pass through the gully.

“The painful thing is that, between September and November last year, we rolled out the drums to celebrate when we saw one of our brothers who came with tractors and workers and started grading the road. We thanked the workers and we were supplying them palm wine and other things to make them happy. We were so grateful that, after many years, the NDDC, through our senator, had finally answered our prayers.

“They left after two weeks, promising that work would resume by January 2020. We took photographs of the road, which we sent to our people outside the community, and a lot of people returned home for Christmas and New Year celebrations.

“We sold our farm produce very well and we were so grateful, but the workers have failed to come back and resume work. When the first rain came, it was as if we were blaming God for sending down the rain. It destroyed the road more than how it was before the grading by our senator. We used to patch a part to enable the courageous ones to pass, but with the state of the road now, it is far beyond what community efforts can do.

“Except the government intervenes, we are doomed. On behalf of Ubulu-Uku youths, I am begging the World Bank to intervene. There was a time when the World Bank came to inspect the road, but we now think that because the World Bank discovered that the road contract had been awarded to someone, it decided not to do the road anymore. Please, World Bank, come to our rescue. We also plead with government to prevail to get a refund of the money for the road project awarded from the NDDC.”

When the matter was brought up within government circles, a state government official who spoke on the condition of anonymity, as he was not supposed to speak with the press, said calling the governor or the DG of Delta State Capital Territory Development Agency, Mrs. Amaechi Mrakpor, would be futile because they are aware that the road has been awarded about six times to someone by the NDDC.

He further alleged, “the last contract to do the road as at 2015 was N245 million, not for the entire road, but about some kilometres, because he has been collecting money in bits. The document is with us. The only people that can assist are the World Bank and the Federal Government. Except they intervene, your community will be totally exterminated.”

Meanwhile, those in government cycles note that the government is not treating the menace of erosion in Delta with kid gloves as earlier in January this year, the government committed N500million in
counterpart funding to that of the World Bank.

However, the focus at the moment seem to be the Owanta community as the menace of devastating erosion has been affecting the area for over 20 years. This has created active gullies in different streets in the area and causing environmental degradation leading to destruction of infrastructure, loss of arable land, lives, properties and established means of income.

But while the Ubulu-Uku community wait for either the World Bank or the state government to come to their aid, these are indeed troubling times for them given that the state of the road, which has been exacerbated by widespread erosion, has almost cut off the community, thus making it nearly impossible to access their homes and neighbouring communities.