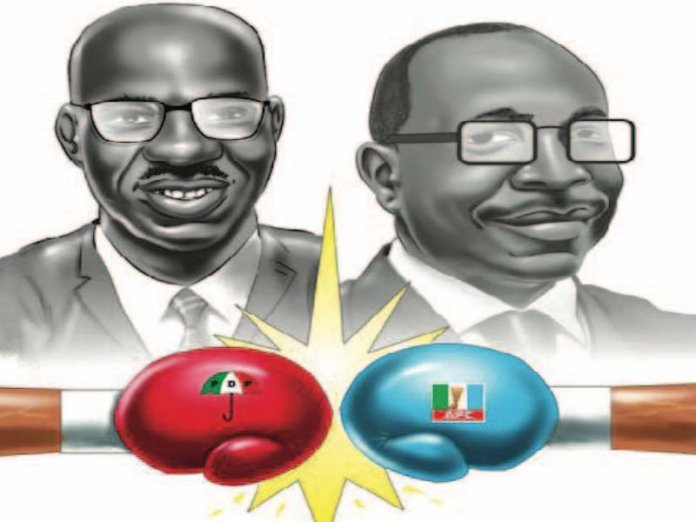 The INEC and security agencies must work harder for a peaceful election
With less than a week to polling day, there is an urgent need for the authorities to confront the threats of electoral violence that loom in Edo State. In recent weeks, there have been allegations and counter-allegations of arms and ammunition being stockpiled. Even if some of these allegations can be dismissed as the usual pre-election wolf-crying by politicians, there have also been some bloody ‘dress rehearshals’ in the course of the acrimonious campaigns. Yet despite the posturing by the principal actors and their supporters, if there is any election that proves conclusively that politics in Nigeria is devoid of either ideals or principle, the coming gubernatorial contest in Edo State is a classic.

While12 political parties are on the ballot, the contest is essentially between the Peoples Democratic Party (PDP) represented by the incumbent Governor Godwin Obaseki and the All Progressives Congress (APC) that has Mr. Osagie Ize-Iyamu as its flagbearer. Both were rivals in reversed political parties in the last election in the state. The same PDP people that were attacking Obaseki four years ago when he ran on the platform of APC are now his promoters and defenders. His former APC allies are now political foes. Ditto for Ize-Iyamu who has found accommodation with the APC bigwigs who called him unprintable names four years ago when he contested as the PDP gubernatorial candidate.

However, the electoral competition this time around is more intense as the campaigns are reduced to a contest of personalities, laced with harsh rhetoric, hateful speeches, vandalism and threats. In terms of capacity for violence, the two rivals are just about evenly matched. There have been several clashes, helped in an environment heaving with small arms and other weapons, and swollen further by criminal networks that have reportedly infiltrated the state. All factors considered therefore, the prognosis for the election does not look good.

Since an ‘end justifies the means’ approach to politics has over the years provided the incentive and motivation for power seekers to believe that all is fair and acceptable in electoral politics, the success or failure of Edo poll will depend largely on the capacity of the security agencies that must remain neutral throughout the entire process. No less important also is the role of the Independent National Electoral Commission (INEC) as an impartial arbiter. Nigerians are increasing losing confidence in the electoral system because of its susceptibility to manipulation.

This is therefore another opportunity for the electoral body to make a difference by correcting the mistakes of the past. Fortunately, INEC has had ample time to prepare and get its act together by ensuring that all logistical problems like late arrival of ballot papers and voting materials to polling centres are not repeated. So, there is no room for excuses. And since the election will be conducted in the midst of the pandemic, INEC should also collaborate with the Presidential Task Force and the State Task Force to ensure that voters and officials are not endangered in the course of performing their civic duty by complying with the Covid-19 health protocols.

To ensure a smooth conduct of the election, there has been a number of well-meaning interventions by critical stakeholders. Some few weeks back, the Oba of Benin, Ewuare 11, called the two warring parties and secured their commitment to peaceful conduct before, during and after the election. On Tuesday, the Bishop Matthew Hassan Kukah-led National Peace Committee will be in Benin, again to get the combatants to sign a peace deal. But the onus is still on the politicians in both APC and PDP to give peace a chance.

At the end, the choice of who governs Edo for the next four years is that of the residents of the state to make. That is what is before them on Saturday. May the best candidate win.

Quote
Nigerians are increasingly losing confidence in the electoral system because of its susceptibility to manipulation. This is another opportunity for the electoral body to make a difference by correcting the mistakes of the past