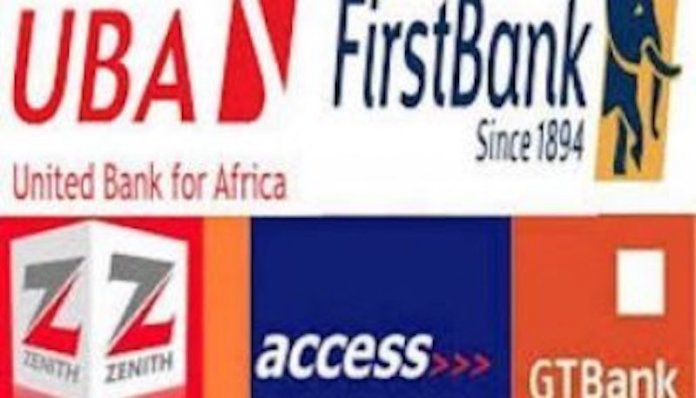 Nigeria’s top five commercial banks recorded mixed performance as at half year of the financial year ending December 31, 2020. While some grew their bottom-line, others did not as profit dropped compared with the position in the corresponding period of 2019. Bamidele Famoofo reports that there are projections that the pressure on earnings will not abate in the second half of the year

Decline in income from investment securities and drop in yields on assets were two major factors that affected the earnings of banks in the first half of the financial year ended June 30, 2020.

But analysts were not surprised by the results as they said the decline was expected given increased capital allocation to risk asset creation given the CBN’s loan to deposit ratio (LDR) policy, as well as the impulsive drop in yields on assets from the prior year.

The impact is a mixed performance posted by the banks, particularly the top five which their half year financial performances were reviewed by THISDAY.

Interest expense expanded moderately over the period, advancing by 2.3 percent y/y to N120.52 billion, with the most pressure exerted by interest on deposits from financial institutions, which rose by 48.8 percent y/y to N34.07 billion, and offset the declines from deposit from customers (-11.6per cent y/y) and debt securities (-31.3per cent y/y). The bank seems to have now optimised its deposit base and is taking advantage of the synergy with the defunct Diamond Bank, as cost of deposits declined by 27.9 percent from the Q4-19 standalone period to the Q2-20 period. While there was a moderate growth in expense on deposits from customers q/q in Q2-20 (+4.2per cent), the run rate would still be well below expense in 2019FY.

Operating expenses increased substantially during the period by 40.0 per cent y/y to N174.29 billion, given the effects of the consolidation with Diamond bank. Given the significant year-on-year expansion in operating expenses, the bank’s cost-to-income ratio (after accounting for LLEs) deteriorated to 70.1 percent from 66.1 percent and 55.0 percent in the previous quarter and corresponding period of the prior year, respectively.

Consequent on the growth in income relative to expenses, the bank recorded a profit before tax growth of 1.8 percent y/y to N74.31 billion, while PAT settled 1.4 percent lower y/y at N61.03 billion, given the higher income tax expense (+19.7per cent y/y).

Interest income grew by 1.1 percent y/y to N216.95 billion, supported primarily by the income from loans and advances to customers (+11.6per cent y/y to N128.37 billion) as risk asset creation has been strong in the year so far (+13.8per cent YTD to N2.62 trillion). The other contributory line recorded a decline – investment securities (-18.1per cent y/y). The decline in income from investment securities was expected, as yields across assets have pared significantly from the prior year.

Also, interest expense declined by 17.4 percent y/y to N59.55 billion, reflecting lower interest cost on borrowings over the corresponding period of the prior year (-50.7per cent to N17.00 billion) and despite the increased cost on deposits from customers (+13.3per cent to N42.54 billion). Consequent to the decline in interest expense, net interest income settled higher by 10.5 percent y/y at N157.41 billion. After accounting for credit impairment charges (+74.2per cent y/y to N23.92 billion), net interest income (ex-LLE) settled 3.7 percent higher year-on-year. The exponential growth in LLE is in line with our expectations, given the application of the ECL model and the expected impact of the pandemic on the bank’s risk asset quality both at present and going forward.

Continuing the trend during the year, non-interest income (NII) was strong, settling 6.2 percent higher y/y at N116.49 billion. The strong growth recorded was supported by expansions in FX revaluation gains (+239.6per cent y/y to N22.02 billion), and gains on investment securities (+30.4per cent y/y to N58.83 billion). This expansion in NII, alongside the growth in net interest income, led to an expansion in operating income of 4.8 percent y/y to N249.97 billion.

Operating expenses growth was moderate, as the bank continued to focus on cost management in the face of moderate gross earnings growth. Operating exoenses grew by 7.1 percent y/y to N135.85 billion, with the most pressure exerted by other operating expenses (+16.6per cent y/y to NGN21.22 billion) such as I.T, and maintenance costs. Consequent to the Opex growth relative to operating income growth, the bank’s cost-to-income ratio (ex-LLE) settled higher at 54.3per cent relative to 52.7 percent and 50.9 percent in the prior quarter and the corresponding period of the prior year. Also, profitability was stronger, with profit-before-tax settling 2.2 per cent higher year-on-year. However, profit-after-tax settled 16.8 per cent higher year-on-year, on account of a 54.8 per cent decline in income tax expense.

Interest expense declined by 9.0 percent y/y to N86.26 billion despite growth across most major interest expense lines. However, the reduced cost on deposits from customers (-19.9per cent y/y to N53.38 billion), as the bank’s CASA mix improved during the period (78.5per cent vs. 73.5per cent in H1-19), was able to offset the impact. Consequent to the growth in income and decline in expense, the bank recorded an expansion in net interest income of 8.4 percent y/y.

The bank still has some scope for gains here given that the CBN has now reviewed the minimum rate on savings deposits down to 10.0 percent of MPR (30.0per cent previously). Analysts expect this will sustain net interest income growth in the year, even as interest income from loans may pare q/q through the rest of the year.

The bank reported a 1.5 per cent y/y increase in gross earnings (GE) to N225.1billion, despite pressure on interest and non-interest income amid extreme regulatory environment and global public health crisis. However, PBT and PAT dipped by 5 per cent apiece due to sharp increase in operating expenses and impairment charges.

Surprisingly, interest income came in 3.2 per cent stronger, settling at N153.7billion. An evaluation of the driver of interest income revealed that this was driven by an increase in the volume of loans disbursed and a surge in financial investment securities, which counter-poised the impact of lower asset yields. However, non-interest income fell 2.0 percent to N71.4 percent, as net fees & commission income tumbled 34.0 percent to N22.3billion despite a 43.5 per cent surge in FX trading gains to N7.7billion.

Cost to Income Ratio (CIR) came in at 43.2 percent following a 19.2 percent jump in OPEX to N83.3billion. Management attributed this to VAT and naira devaluation induced inflation, increased regulatory cost (AMCON & NDIC due to a surge in total assets & deposits), as well as COVID-19 donations. Accordingly, PBT and PAT slumped 5.0 percent lower to N109.7billion and N94.3billion respectively. This weighed on net margins and profitability ratios as PAT margin, annualised ROA and ROE moderated to 41.9 percent, 4.6 percent and 26.8 percent respectively.

Commenting on the results, the Group Managing Director of FBN Holdings, Mr. UK Eke, said: “The H1 2020 financial results are impressive and reconfirm our consistent focus on enhanced shareholder value. Despite the difficult operating environment, the H1 results demonstrate our resilience and capacity to deliver on long-term ambitions.

“The 56.3 per cent growth in PAT for the period is a testament to the strength of our organisation to continually deliver exceptional services to our customers in these unprecedented times. We have been able to achieve this feat by leveraging our agent banking network, innovative e-banking capabilities and operational efficiency and by utilising technology.”

He added: “During the quarter, we successfully divested from the underwriting (insurance) businesses to focus on our banking operations. We are confident this will enhance greater value to our stakeholders and strengthen the Group’s resolve to consolidate its leadership of the banking sector.

“Following the divestment, FBNHoldings injected Tier 1 capital into FirstBank, effectively increasing its CAR to 16.5 per cent. This provides a comfortable buffer against regulatory requirements with the potential to support any emerging business opportunities. Looking ahead, we remain cautious, but we are confident that our business is fundamentally strong to withstand any future challenge towards enhanced performance”.