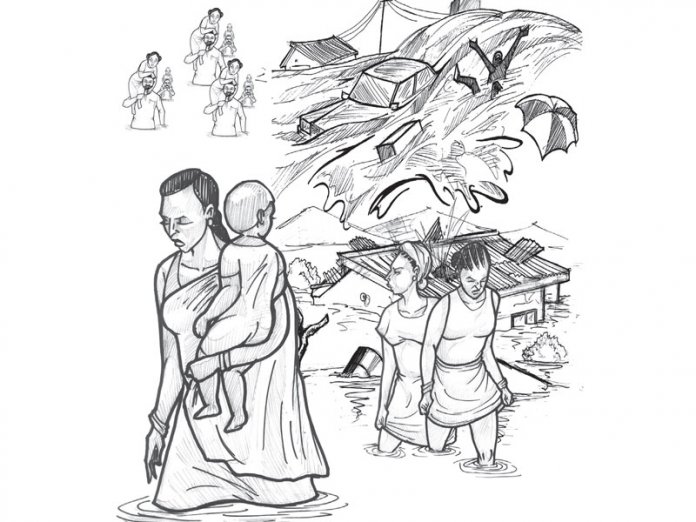 The authorities must do more to mitigate the impact of floods

Last week heavy floods pounded Kebbi State, submerged hectares of farmlands, destroyed houses and claimed six lives. President Muhammadu Buhari was touched. “I am particularly sad over this incident because it’s a setback to our efforts to boost local rice production as part of measures to stop food importation,” he said. But Kebbi is not an isolated incident. In the past few weeks, many communities across the country have been devastated by floods. Earlier in the week seven persons were killed in Jigawa State when about 2000 houses were submerged by floods. Some communities in Niger, Kogi, Sokoto and Zamfara States have also been rendered waste by heavy floods.

As we have repeatedly highlighted, some of the causes of flooding are self-inflicted by residents of communities who are fond of dumping refuse on waterways. We have also seen many instances where people arbitrarily put up structures on flood plains and water channels. This act of lawlessness obstructs the waterways and makes such areas prone to flooding. Beside the loss of lives and destruction of property, the economic consequence of flooding, as recently exemplified in Kebbi, can be dire.

Flooding does enormous damage to the eco-system and destroys public utilities. It also elevates the risk of hunger and malnutrition because of disruption of farmlands and commercial losses for farmers engaged in subsistence farming. With its urbanisation rate put at 5.5 per cent yearly and considered one of the highest rate in the world, the number of Nigerians at risk or vulnerable to flood hazards is likely to increase. In 2012, similar warnings were given by NEMA which were not heeded by the state governments and local communities at the end of which scores of lives were lost. Then President Goodluck Jonathan who visited some of the hundreds of thousands of people rendered homeless by floods had called it a “national disaster”. It seems no lesson had so far been learnt going by the latest warning of NEMA as to possible flooding incidents in 2020. Indeed, since the warning by the agency, are the states putting any precautionary measures in place to avert the repeat of the 2012 incident?

For that not to happen, the federal and state governments must take immediate steps to ensure that flooding do not become another disaster in the nation’s history. The states should reach out for the ecological fund to help take care of the river banks that are particularly prone to flooding. We cannot afford another large-scale disaster in an economy that is on life support.

Celebrating The Life of Captain Hosa