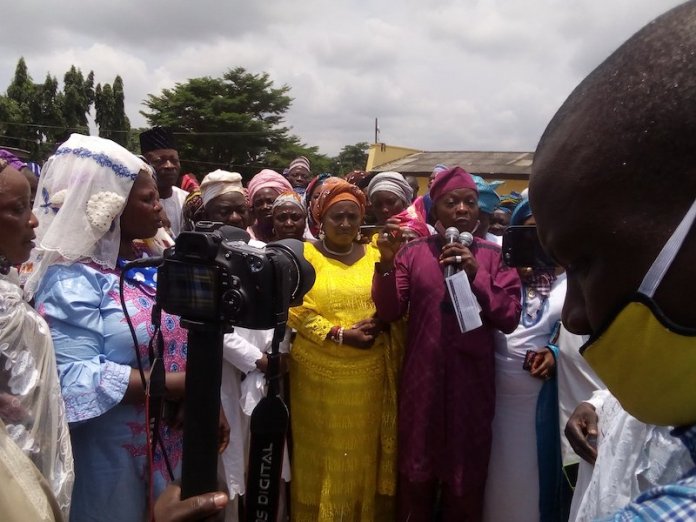 Numerous traders from all the zones in Oyo State under the umbrella of Coalition of Market Groups of Oyo State yesterday stormed the secretariat of the Nigeria Union of Journalist (NUJ) at Iyaganku in Ibadan to register their displeasure over what they termed ‘alleged imposition’ of Babaloja-General of the state on them by the Olubadan of Ibadanland, Oba Saliu Adetunji.

The traders at the rally said if the Oyo State Government ratified the Babaloja installed by the monarch on them, the coalition warned that they would install Babaloja in all the major markets in the state.

The Iyaloja-General of the state, Alhaja Wuraola Atanda-Daisi; the South-west Coordinator of the National Traders Association of Nigeria, Chief Odunade Kayode-Danjuma, and the Secretary, Chief Abiodun Adegoke, while speaking with journalists, vowed to resist any attempt to impose any Babaloja on the traders in the state.

The Chairman of Oyo State Market Men and Women, Alhaji Dauda Abiodun Oladepo, on his part, disclosed that the Olubadan in his letter addressed to the leadership of the traders on July 16, 2020, promised not to interfere in the internal affairs of the traders, noting that the traders were surprised to discover that he is now imposing a Babaloja-General of the state on them rather than maintaining his earlier stand.

According to him; “We appreciated the state governor for allowing us to work during the COVID-19 pandemic lockdown. If you see the different unions present here today, you will see that we are the real authentic traders. On this issue of Babaloja of the state, we can’t accept any imposition. Our own Babaloja is Alhaji Jimoh Akinremi.

However, while reacting to the allegations, the monarch, who spoke through his spokesman, Adeola Oloko, said the protesters were aggrieved because they were not favoured by the choice (Alhaji Yekini Abass) of the traditional ruler.

He maintained that the market leadership is an extension of the traditional institution, stating that the monarch has done the right thing by installing the right person as the Babalola-General of the state.

Oloko said: “Before Olubadan took that step of installing him, he had visited all other monarchs and traditional rulers in the state. Ask those who are protesting, including the Iyaloja-General of the state. The state Governor, Seyi Makinde had even said it is over on the issue of leadership for the traders. All those installed in the markets have the certificate of the Olubadan. That means Olubadan installed them. So why are they now aggrieved?”