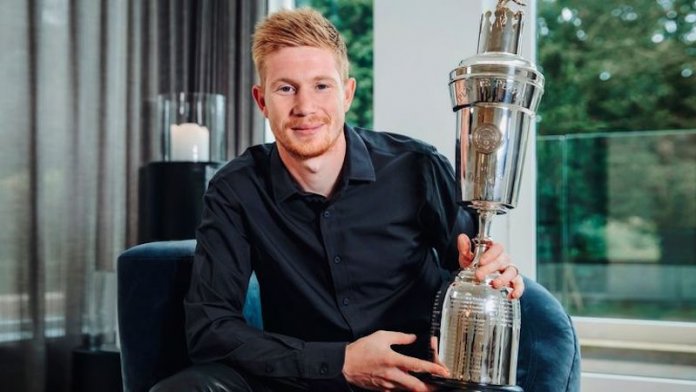 De Bruyne, 29, praised City Manager Pep Guardiola for helping him earn the honour saying “he just lets me be me”.

Jordan Henderson was among five Liverpool players to be named in the Premier League team of the season.

He is the first Manchester City player to win the award since its inception at the end of the 1973-74 season.

“This is a big honour,” he said. “To be voted by your colleagues, competitors from other teams who you always play against on the field. That they vote for you for best player; it’s amazing.

“It’s maybe strange that I’m the first one at City, seeing all the good players who played there before and who are still playing. But it’s nice to represent the club.”

On Guardiola, he said: “He gives me a lot of freedom; I don’t know why, that’s just the way it goes between us.

“He knows in one way I will always put the team first and then obviously if I can help myself I’m going to do that. He trusts me completely.”

For the third consecutive year, the top award for the men’s category went to a player whose team did not win the Premier League title.

Reds pair Van Dijk and Mohamed Salah were the past two winners and went on to lift the trophy last season, having come close in previous years.

England scored 21 goals in all competitions for the Blues and prevented Arsenal’s Vivianne Miedema claiming the women’s award twice in a row.

“It’s a huge honour to be voted for by your fellow peers, so thank you to everyone who voted for me,” England said.