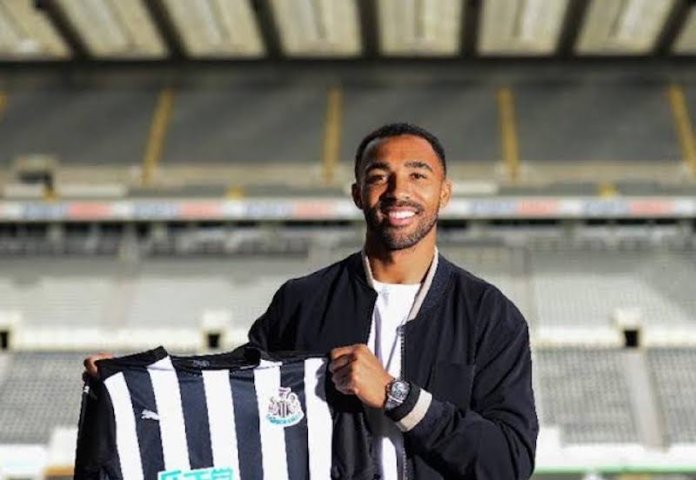 There are stong indications yesterday that Callum Wilson who completed his £20million move to Newcastle United from Bournemouth and could be set to take the No 9 jersey.

The striker finalised the terms of a four-year deal on Monday morning and will now meet his new team-mates ahead of Saturday’s Premier League opener at West Ham.

His former Cherries team-mate Ryan Fraser is also expected to be unveiled as a Newcastle player on Monday afternoon, joining on a free transfer.

Wilson will likely replace Joelinton as the club’s No 9 after the Brazilian – a £40m club-record buy last summer – scored just twice in the Premier League during his debut season.

The 28-year-old Wilson said: ‘From the minute I knew that Newcastle were interested, it was definitely something that appealed to me.

‘It’s a massive club with great history. Along the years, they’ve had great strikers so if I can emulate half of what they’ve done, I’d like to attempt that.

‘I believe in my ability as a player. As a striker I think it’s important to set yourself goals long term and short term, and I’m hoping to achieve them.

‘With the players around me, I believe we can get the goals we need as team and I want to help contribute to that.’

Head coach Steve Bruce said: ‘Callum is somebody I’ve admired for a long time and I’m delighted to get him.

‘He has done fantastically well at Bournemouth and was deservedly playing centre-forward for England less than two years ago.

‘The club has worked ever so hard to get Callum here and we have beaten off competition from a number of clubs.

‘I’m grateful the club has made it happen. Lee Charnley and those behind the scenes deserve a lot of credit.’

Wilson released an open letter to Bournemouth fans on his social media pages that thanked them and the club for their support, saying ‘you’ll always have a place in my heart.’