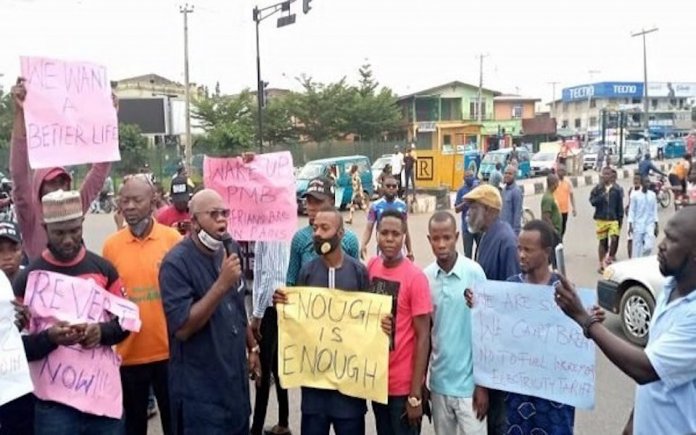 By John Shiklam in Kaduna, Peter Uzoho in Lagos and Yinka Kolawole in Osogbo

Angry protesters, mainly youths, yesterday took to the streets in Osogbo, the Osun State capital to protest increment in Premium Motor Spirit (PMS) and electricity tariff which they alleged spiked the prices of essential commodities, thereby making life difficult for them. They handed the federal government a five-day ultimatum to rescind the decision or risk prolonged protest.

In a related development, the Coalition of Northern Groups (CNG) has asked the federal government to “immediately suspend” the recent increase in pump price of petrol and electricity tariff or face nationwide protest.

This is as a non-governmental organisation, Emergency and Risk Alert Initiative (ERAI) lent its voice in opposing the hike of petrol price and electricity tariff approved by the federal government.

The protesting youths who were armed with placards bearing different inscriptions that read: “Revert fuel price now”, “Enough is Enough”, “ We want a better life”, “Electricity tariff hike is evil” among others chanted anti-government slogans while marching round major streets in Osogbo.

The aggrieved youths decried the decision of the federal government on the increment which they adjudged insensitive and threatened not to relent in fighting against what they described as unpopular decision of the government.

They also described the present administration under the leadership of Muhammadu Buhari as wicked, callous and inconsiderate and insisted on reversal of the hike in the petroleum product and that of the electricity tariff.

Prices of the commodities skyrocketed last Wednesday when the government fixed the new prices of petroleum product at N151.56 per liter as against the former price of N138 per liter.

However survey conducted round by THISDAY yesterday in the state revealed that, the petroleum product is now being sold for N162/per liter in many filling stations in the state.

Addressing a news conference in Kaduna at the end of its meeting, spokesman of the Northern group, Abdul-Azeez Suleiman, threatened that it would mobilise its members for a prolonged nation-wide protest if the federal government failed to revert to the old pump price of fuel and electricity tariff.

The group lamented that unfolding events around the national economy, security and high cost of living had raised serious concerns over the direction the country was heading.

It noted that the decision by the federal government to hike the prices of petroleum products and electricity tariff had ignited widespread discontent and anger across every segment of the Nigerian society.

Suleiman said, at the meeting, the CNG reviewed the alarming rise in the cost of living in the face of pervasive poverty and fast spreading general insecurity of lives and property across the country.

According to him, the country was pregnant with unforeseen circumstances following development and the unfolding scenario.

The group maintained that: “whereas the present administration had upon inception identified economic revival and security as major components of the three pillars of its change agenda, its entire national economy and law and order assets appear incapable of arresting an imminent drift towards poverty and the likelihood of the setting in of anarchy.

“That the government’s mismanagement of an economy already adjudged in a second recession, is characterised by significant loss of output, massive youth unemployment, a rising level of poverty, instability, and irregular migration of skilled and unskilled labour.

“That despite the administration’s claims to fighting a war against corruption, the entrenchment of mediocrity has left the country worse than it was five years ago in the global corruption perception index.

“That the present administration had been tolerated for too long even with its level of impunity in the dispatch of goods and services which gravely endanger the peace, unity and development of the country.

“That the administration’s audacious impunity climaxed with hikes in fuel pump prices from an initial N87 to N151.50k per liter; electricity tariff from N22 to N66; and Value Added Tax (VAT) to 7.5% from 5%.

“That these unjustified and unjustifiably indiscriminate increases with concomitant effects on life sustaining essentials like foodstuff and foreign exchange rates have resulted in exponential escalation of inflation, despair, crime and criminality.”

The group alleged that the “government has lost the courage to assume sole responsibility for the regulation and control of market forces thereby abandoning Nigerians to the mercy of cutthroat multinational communication and sundry service providers, unscrupulous internal profiteers that infest the banking and other financial institutions and largely extortionist government policies of multiple taxation.”

This, according to the CNG, “has reached a point where government looks on as oil marketers such as IPMAN become sole determinants of prices of fuel while banks impose ridiculous charges on customers at will and telecom operators extort Nigerians in exchange for low grade services.”

It regretted that it was unfortunate that President Buhari had blamed the current hike in commodity prices on middlemen in the same way he accused middlemen of his failure with the economy as military Head of State in 1984.

Suleiman declared that “On the basis of the foregone critical observations, the CNG hereby resolves to:

“Call on the federal government to announce an immediate and unconditional reversal of the prices of fuel to the earlier N145 per liter and electricity tariff to N23 with the assurance of regularity in quality and quantity of supply, assume full control of commodity pricing, jettison all aspects of unwarranted taxation, halt the current multi sectoral extortions by multinational service providers, banks and other financial institutions.

“Put the public on the alert for a possible prolonged nationwide resistance in the likely event of government opting to grandstand.

“For the avoidance of doubt, government and all concerned institutions should note that the excesses and impunity by government have been tolerated for too long and the younger generation of Nigerians is no longer going to be disposed to their collective future destiny being taken for granted.

“We are strongly convinced that the President’s desperation to shift the blame for this hardship on some middlemen only confirms failure to provide leadership.

ERAI on its own, warned that the increment of the two major energy sources would deepen poverty, widen inequality and heighten crime and violence in the country.

In a statement issued yesterday and signed by its Executive Director, Gbenro Olajuyigbe, the organisation condemned the nonchalant attitude of the federal government and its agencies in respect of the price hike.

Olajuyigbe further condemned the government for not being thoughtful in its decision to increase electricity tariff and price of petro in the contexts of the current economic devastation caused by COVID-19 pandemic.

He argued that such increments were ill-timed as the pandemic had severely impacted Nigerians and their businesses without appreciable support for recovery from the government.

He said: “Emergency & Risk Alert Initiative (ERAI) believes that increase in electricity tariff and the price of petrol will trigger high cost of living, hurt businesses, deepen poverty, widen inequality, heighten crime, violence and abolish the constitutional expectation of security and welfare for which government is instituted to provide. We demand the immediate reversal of the hike

“Increase in electricity tariff will increase cost of production of already ailing companies and make their products uncompetitive in the market, further harming the capacity for economic growth in the long run.

“Developing country like Nigeria that is desirous of growth and development needs to produce at very low cost so as to compete with other states who have mastered the art of ease of doing business at low cost.

“It is sad and unacceptable that after over five years in office with campaign promise of building refineries, the government of an oil producing and exporting country like Nigeria has neither built new one nor rejigged the existing ones in order to refine petrol.

“With this failure and by continually importing petrol, Nigeria government has kept on exporting jobs to other countries, thereby exacerbating unemployment rate at home.”

He faulted the removal of petrol subsidy, saying what it (government) called removal of subsidy was sheer transfer of cost of its failure and irresponsibility.

Olajuyigbe described as more shameful, the tendency of government to be justifying the increase of fuel price by drawing price comparison from the United States, Europe and other countries without corresponding reference to Per Capita Income, Gross Domestic Product (GDP), infrastructures, available options; including modes of transportation and diversities of such economies.

“Such face-saving data and comparison are misleading and disingenuous. They are too simplistic as impacts vary, development economic analysis is about vulnerability, about risk and risk reduction measures in place to address spiral effects of economic policies; more so in a mono-cultural economy like ours”, he added.