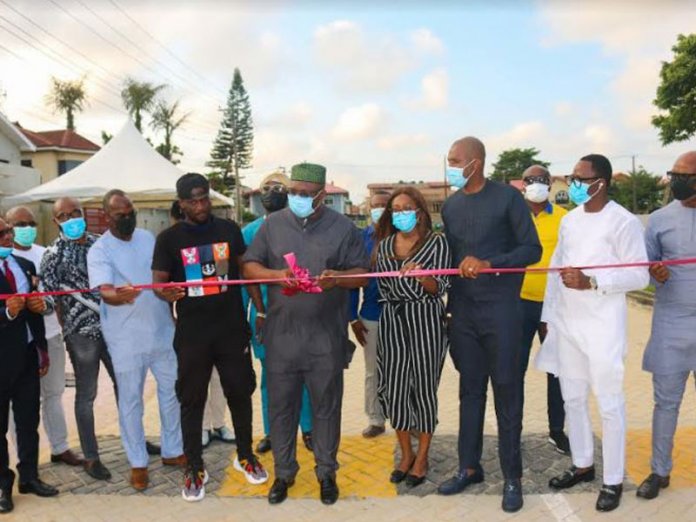 The Managing Director and Chief Executive Officer, Le Paris Group, Dr. Chima Anyaso has reinstated his commitment to contribute to the development of Lagos state through building of roads and other infrastructure to improve the living standard of residents.

The CEO noted that the rebuilding of roads are necessary to improve the quality of living in the state and host community, Lekki in particular, even as he believes that the private sector should continue to partner government to deliver quality people-oriented development.

He said this during the commissioning of completed road reconstruction and rehabilitation projects on parts of Niyi Okunubi Street, Lekki phase1, Lagos by Le Paris Group on Thursday September 3 this year.

On what motivated the project, Anyaso expressed, “We are in business to add value. So, this project is in fulfillment of the promise we made to our host community and neighbourhood to constantly seek ways to continue to add value to the environment where we operate”.

He further lauded the commissioner for coming and equally thanked the neighbours and friends who came out to support them. “I want to especially thank my dear wife, Mrs. Adanna Anyaso for all the support which resulted in this project.”

Commissioning of the project, the MD hinted that this is his way of giving back to society. “Although I am from Abia State, I consider it fit and proper to do this to support the community where I live and do my business.”

With this CSR, Anyaso tasked other private sector players to support governments’ efforts. According to him, through mutual collaboration with government, businesses can open more doors for sustainable infrastructural development and enhancement of the collective wellbeing of all citizens and residents.

On his part, the Commissioner for Economic Planning and Budget, Lagos State, Mr. Samuel Egube who led other dignitaries to commission the road project, noted that any effort such as the one by Le Paris Group or by other individuals and private businesses to contribute to the development of Lagos State, is worthy of recognition and commendation.

He said that the Executive Governor of Lagos State, Babajide Sanwo-Olu emphasises communal living and harps on citizens and residents rethinking how to take care of one another in Lagos State through neighborhood association and collaborative development of neighborhoods.

Egube acknowledged that the Lagos State government’s well-coordinated and strong response to the COVID-19 pandemic was a demonstration of community-based efforts that were successful because of support from the public, businesses, and individuals who are committed to the progress of the state.

The strength of government responses, in his words, came from the support from the public and citizens. We need to continue to emphasise on community living. There is a lot to do to bridge the infrastructure gap in Lagos. Revenue to GDP in Lagos currently stands at two per cent, meaning that Lagos is not collecting enough taxes.

“Therefore, it is these kinds of projects as executed by Le Paris Group that help bridge the infrastructure gap, and I must say that the government needs more partners to drive infrastructure,” he added.

The commissioner, however, mentioned that Lagos state can be better. “We bear in mind that the culture of taxation is still growing and it is a key factor that increases equity, productivity and value generation.”

According to him, this CSR project in the form of road reconstruction and rehabilitation shows that the good people of Lagos state can contribute more to grow the state.

“This kind of project will unleash good development. This very project is noteworthy, we need more of this across Lagos and for people and government to jointly invest in improving the state infrastructure development,” he stressed.

Other dignitaries present at the cutting of tag and commissioning of the roads project are Hon. Friday Osanebi, the former Deputy Speaker of Delta State House of Assembly; Mr. Obinna Peters; Barrister Gaby Ikeji; and Mr. Paul Okoye (P-Square), amongst others.