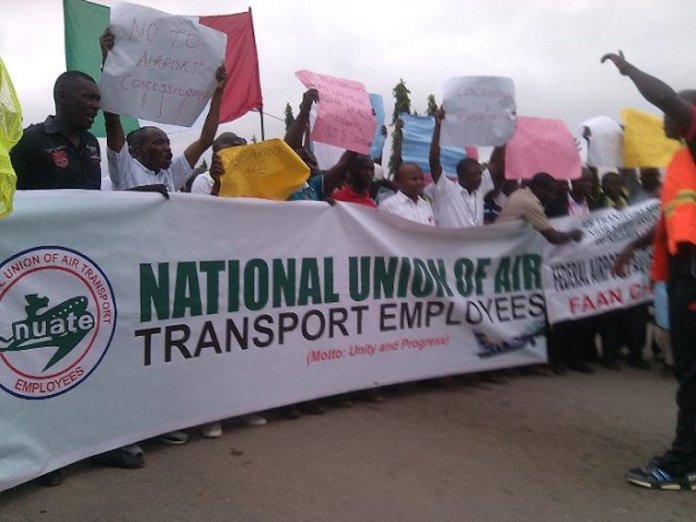 Chinedu Eze in Lagos, Kasim Sumaina in Abuja and Ibrahim Shuaibu in Kano

Aviation workers yesterday embarked on a protest that disrupted activities at the offices of the Federal Airports Authority of Nigeria (FAAN) over the plan by the federal government to lease the four major airports in Lagos, Kano, Abuja and Port Harcourt.

In Lagos, the workers shut FAAN’s offices from 8:00 a.m. to 2:00 p.m and marched on the General Aviation Terminal (GAT) and the international terminal of the airport from Freedom Square located in front of FAAN office.
At about 6 a.m. the security officers manning the different gates into the FAAN premises were excused by the union members, who padlocked the gates.

Leaders of the four unions, Association of Nigeria Aviation Professionals (ANAP), National Union of Air Transport Employees (NUATE), Air Transport Services Senior Staff Association of Nigeria (ATSSSAN) and the National Union of Pensioners (NUP), gathered the protesting workers to address them on why the unions decided to oppose the concession of the airports.
The Secretary General, NUATE, Mr. Ocheme Aba, told the workers that the concession project would not favour the workers as it would lead to job losses.

He reiterated that the concession process had not been transparent since it started.
Chairman of FAAN branch of ATSSSAN, Mr. Ahmed Danjuma, described the concession as a one-man project by the Minister of Aviation, Senator Hadi Sirika.

According to him, the planned concession is being facilitated clandestinely in connivance with the Infrastructure, Concession Regulatory Commission (ICRC).
ANAP Secretary, Mr. Abdulrazak Saidu, stated that the concession so far embarked on in the industry had been marred by controversies.

The Nigerian Labour Congress (NLC) in a statement signed by the National President, Dr. Ayuba Wabba, said that “the unwholesome and unpatriotic attitude of giving away our prized national property to private sector operatives is not only unjust and immoral but also in ultra-violation of Chapter 2, Section 16 of the 1999 Constitution of the Federal Republic of Nigeria.”

In Abuja, the aviation workers embarked on a peaceful demonstration at the Nnamdi Azikiwe International Airport.
Speaking during the protest, the Chairman of the NUATE, Mr. Ahmed Yusuf, said: “We are protesting because while we were in a lockdown, the Minister of Aviation, Senator Hadi Sirika, surprisingly received the outline business case (OBC) certificate for the concession of the four most viable airports out of the 22 airports in Nigeria. This came as a surprise and an insincere act. It lacked transparency and the staff members were not carried along.”

He added that the unions had suggested Greenfield concession where the concessionaire will acquire a virgin land, build, operate and transfer the airports, stating that this will create more jobs during and after construction and drive competition.

On his part, the Abuja chapter Chairman of ATTSSAN, Mr. Samuel Wuyep, said: “The unions have never agreed that the concession should happen. We oppose it and we will continue to oppose it.
“Procedurally, there are certain steps to take, we just went through the first step and the minister abandoned it and when to obtain a certificate from ICRC. There is no transparency in it.”

In Kano State, four of the FAAN’s unions protested at the Malam Aminu Kano International Airport, carrying placards.
Some of the placards read: “We say no to airport concession; yes to FAAN Pension Scheme. When injustice becomes law, resistance becomes duty.”

The Chairman of NUATE, Mohammed Zakaria, said the concession of the airports would lead to a massive job loss in the aviation industry. The protesters recalled what happened to the staff of NEPA, Nigeria Airways and NITEL when the establishments were privatised.

“We want to continue as FAAN. The government owns everything but we are saying no to concession,” he said, adding that airports’ concession poses security threats to the nation while resulting in loss of revenues to the government.
ANAP North-east Chairman, Hassan Aliyu, suggested that there are a lot of virgin lands in several states, adding that if the ‘investors’ want to build ‘first-class airports’ in the country, they should go there and invest.
The protesters also rejected the directive to move all staff who retired from April 1, 2014 to PenCom. They said FAAN had not remitted any money to PenCom.

Chairman of Air Transport Service and Senior Staff Association of Nigeria, Mr. Sama’ila Muhammad Alkali, said the protest was organised to reject the movement of FAAN Staff to contributory pensions.
“FAAN is owing it over N200 billion; if you move us to PenCom, where will it get the money to pay us? They should first arrange money on the ground; let every staff know their entitlements.

“We spent our time and energy to build the airports, the so-called investors cannot just come and take over the facilities and enrich themselves without involving the key stakeholders.”
“The Outline Business Case (OBC) was prepared since 2017 and only made available this August after they have concluded every aspect of the deal. They are telling us lies,” Aliyu stated.